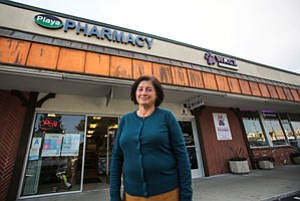 ‘Really Dangerous’: May Chehade, owner of Playa Pharmacy in Playa del Rey, who says she can smell gas from SoCal Gas’ aging wells facility nearby. Photo by Ringo Chiu.

Some of the wells at the facility, located within two miles of Los Angeles International Airport, Loyola Marymount University, and booming tech and residential campuses at Playa Vista, failed to demonstrate “mechanical integrity” during a recent examination, according to a state report.

Of those, some were found to be leaking. SoCal Gas repaired two of the leaks quickly and returned the wells to service. But a leak in a third well was apparently more serious and inspectors ordered that well shut down pending further evaluation, according to Don Drysdale, a spokesman for the California Department of Conservation, which oversees the Division of Oil, Gas and Geothermic Resources.

“The Division’s work at the site is ongoing, with the well and project evaluations to ensure public and environmental safety,” he said in an email.

Tests for mechanical integrity were to have been completed in August. That deadline was extended to the end of the year, and again to March 30. While SoCal Gas received an extension to complete the tests, one well’s mechanical integrity could not be assured by the deadline and was plugged and taken out of service.

State inspectors have inspected the site since the beginning of the year, Drysdale said.

“There are no present compliant issues at this time,” she wrote in an email. “Although there has been no written extension, DOGGR gave our Storage Field Engineer a verbal confirmation that as long as we have a rig on the (plugged) well we will not be in violation.”

Should one or more of the wells have a failure – some were built 80 years ago – and a serious leak occur, the economic impact could be far greater than the recent leak at the gas company’s Aliso Canyon storage facility that forced hundreds of Porter Ranch residents from their homes.

“It’s really dangerous,” said May Chehade, who said she can smell gas every time she steps outside her Playa Pharmacy at 8131 W. Manchester Ave., less than 500 feet from the SoCal Gas storage facility. “If something happens, we’re going to lose our business.”

Anneliese Anderle, who retired as a senior supervising engineer for the state Division of Oil, Gas, and Geothermic Resources in 2014, had inspected the Playa del Rey site. She said there is a higher risk of a gas leak at the facility because some of the wells there are older than those at Aliso Canyon.

“Everything is gleaming on the surface, but underground everything is falling apart because it was not regularly maintained,” she said.

In an emailed response to questions about the storage facility, SoCal Gas spokeswoman Melissa Bailey said 31 of the 54 wells in Playa de Rey are active and equipped with surface safety valves.

Just nine of the wells have subsurface safety valves, however, and Anderle said the surface valves in place on the majority of the Playa del Rey wells would not protect against a major leak such as the one in Aliso Canyon.

SoCal Gas said it planned to install subsurface safety valves at nine additional wells by the end of this year.

SoCal gas bought what had been an oil field from Texaco in 1975 and converted it to a gas storage facility. Today, the property sits on a reservoir of 2.6 billion cubic feet of natural gas in 54 wells – some that date to 1934 – stretching along the Ballona Wetlands.

The Playa del Ray facility has seen problems in the past.

From 1959 to 1981, it experienced 10 gas leaks, including some from wells that experienced recurring seepages, according to California Public Utilities Commission records.

In 2003, a malfunctioning emergency shutdown valve caused a leak, leaving nearby homes, cars, and yards covered in oil. A 2013 gas release sent smoke and flames soaring into the air in what a SoCal Gas spokeswoman called “an unplanned release of natural gas.”

“Our main concern is that the facility is not properly maintained,” said Geoff Maleman, business representative for the Neighborhood Council of Westchester and Playa del Rey. “We should make the public aware of it and confront SoCal Gas to make sure they comply.”

Al Tipon, senior director of facilities management at Loyola Marymount, said he has occasionally smelled gas on the campus.

“Of course I’m concerned,” he said. “I can’t comment on the numbers, but any citizen would be concerned.”

A four-month leak at the Aliso Canyon facility forced Porter Ranch residents living as far as two miles from the plant to relocate.

“I’m very concerned,” said Felicia St. Denis, an owner of the Flowers by Felicia flower shop near Manchester and Pershing Drive. “There are a lot of families with children in this neighborhood. Where would they go?”

Los Angeles City Councilman Mike Bonin, whose district includes Playa del Rey, said in a statement he has taken steps to make sure a gas leak of Aliso Canyon’s scale doesn’t happen in his district.

“The SoCal Gas disaster in Porter Ranch was a catastrophe, especially since SoCal Gas operates a similar, but much smaller, storage facility in Playa del Rey,” Bonin wrote in an email. “I paid extremely close attention to the incident and have been working with my colleagues as the city attempts to increase safeguards against this sort of events happening on the Westside.”

Sara Hofman, a resident of Playa Del Rey who lives a block away from SoCal Gas’ storage facility, said she and her husband can sometimes smell gas in their homes.

“We’re concerned because of what happened in Porter Ranch,” Hofman said. “It’s the same setup over here.”