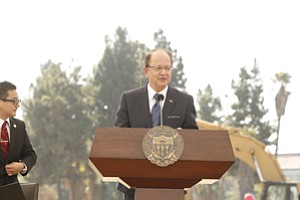 Not long after C.L. Max Nikias arrived as a professor at USC in 1991, he was greeted by riots, fires and floods. But he nevertheless fell in love with the city and the school, where he was named president in 2010. Last September, on the site of a dated shopping center across the street from the campus, USC broke ground on the 15-acre, $650 million USC Village – the largest construction project in the history of the university and South Los Angeles. When it opens in 2017, it will be home to thousands of student residences as well as retail and entertainment options. Nikias spoke with the Business Journal about the project, how the school recruits international students and how USC’s neighborhood has transformed since he came to Los Angeles.

Question: You broke ground on USC Village a year ago. How is the project progressing so far?

Answer: It’s on time and below budget so far, so everything has been progressing nicely. The village will be transformative for our neighborhood, not just for the university. Trader Joe’s and TargetExpress have already committed and are going to have a presence there.

How do you ensure the mix of shopping options at USC Village will serve your neighbors, not just USC students with money to burn?

USC Village will add lots of student housing, but there’s still not enough housing near campus, especially for graduate students. How are you addressing that need?

College graduates earn more than nongraduates, but they also struggle with loads of student debt. How do you sell the value proposition of a USC education?

First, it’s the cost versus the value. What’s the return on the investment? We look for ways every year to control our expenses so we keep our tuition at affordable levels. But we are a private university, and I do recognize the fact that we are expensive. However, where we compensate for that is the financial aid package. Two-thirds of our undergraduate students get some form of financial aid. Also, USC represents one of the top 50 research universities in the United States. You can’t really compare the value of our degree with just any other college.

USC is the most popular destination for Chinese students who want to study in the United States. Has the university been impacted by the economic downturn there?

We’ve been looking into that very carefully and we have not seen any effect or any change. Of course, this is something we’re going to monitor carefully throughout the year, even for next year’s enrollments. However, I’ve always felt that when it comes to an international student population we should be more global and more diversified, so you don’t depend on one nation. We opened a USC office in Sao Paulo, where we actively recruit students. We have had an office in Mexico. We have trebled our enrollment from Latin America in the last four years. Of course, the number is not as big as we get from China or India.

How has the neighborhood changed since you’ve been at USC?

When I came to USC, my very first year as a professor, we had the riots. Then the following year we had the fires. We had the mudslides and then we had the Northridge Earthquake. And at the same time, we had the severe cutback of the aerospace industry where the economy of L.A. was going down the tubes. And yet, look at where L.A. is today. And look at downtown, there’s so much construction going on. Back then I couldn’t have imagined it, but it happened – and it happened very quickly.