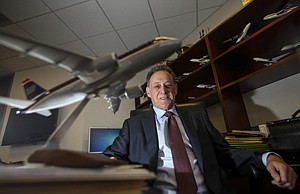 Demand for aviation-related legal services has increased so much that O’Melveny this month launched a practice group dedicated specifically to the industry – and one that apparently is unique because of its breadth.

“They have developed an expertise in this industry that is unparalleled by any other firm,” Jones said. “Having an industry group on whom we can rely that’s going to facilitate things from my perspective makes my job easier.”

O’Melveny’s new practice is designed to help aviation clients navigate merger and acquisition opportunities as well as labor and antitrust disputes, among other issues.

Bob Siegel, a partner in O’Melveny’s downtown L.A. office, heads the group, which he said includes about 50 attorneys from around the country.

Historically, most major law firms, including O’Melveny, have used practice groups to organize attorneys based on the area of law they specialize in. Siegel, for instance, is also a member of the firm’s labor and employment practice group.

Many large firms, Lippman said, are now combining attorneys with varying expertise – such as litigation, finance and antitrust – to form industry-specific practice groups. Health care, life sciences and entertainment are among the most common practices these firms have formed groups around.

“It’s a way to be able to better market directly to their clients,” Lippman said. “Aviation isn’t a practice group like life sciences or digital media; it’s not one of these hot new practice areas. … O’Melveny has chosen a unique branding strategy. It’s smart.”

Other law firms have aviation practices, but they usually focus on one or two elements, such as an aviation litigation group or an aviation finance group. O’Melveny’s practice apparently stands alone in that it includes litigation, finance, labor and employment, mergers and acquisitions, and regulatory compliance, among other specialties.

Siegel said that even though the group has members from several other offices, it made the most sense to base the aviation group in Los Angeles.

“The expertise and practice originated here,” he said, “and we had some considerable (aviation-related) litigation projects here in Los Angeles.”

While Siegel and a handful of other O’Melveny attorneys only began considering creating a formal aviation practice earlier this year, he and the firm have a long history of catering to clients in the industry.

Indeed, Siegel brought the first aviation client to the firm some three decades ago.

“Somewhere around 1981 I was asked by one of the senior partners here to meet with one of the cargo airlines here, Flying Tigers,” he said. “I had been focused more on employment litigation, especially in entertainment, but it eventually spread.”

Flying Tigers, which merged with FedEx Corp. in the late 1980s, opened the door for a slew of other aviation clients, such as Pan American World Airways, American West Airlines, United Airlines Inc. and US Airways to name a few.

Since that launch, however, many of O’Melveny’s airline clients have consolidated with one another through mergers and acquisitions. Yet despite a smaller client pool, Siegel said the demand for legal work by the industry is stronger than ever.

“In the airline industry, we’ve gone through a lot,” he said. “There has been a changing face in the industry itself: everything from post-9/11 bankruptcies and now consolidation. And as you change, you get challenges. …There’s greater, more intensified demand and higher stakes because these are very large enterprises.”

On top of that, a slew of airports throughout the world have turned to O’Melveny for legal guidance on the finance side as they seek to upgrade facilities and infrastructure. In the past two decades alone, it has worked on more than 50 airport projects around the world, representing airlines, airport owners and investors on projects that have a combined value of nearly $20 billion, according to the firm.

Eric Richards, another partner in O’Melveny’s downtown office who has joined the aviation group, said he devotes about 75 percent of his workload to representing aviation clients with financing deals relating to airport infrastructure.

“We have a lot of infrastructure that has been neglected since it was built 40 or 50 years ago,” he said.

His work for the industry is quite different than the labor-related jobs Siegel handles, but Richards noted that it’s much more helpful to have an organized group at the firm that’s able to assist one another on understanding the complexities of the industry.

Jones, general counsel at Fort Worth, Texas’ American Airlines, is very familiar with the complexities of the business he’s in. Indeed, he said that it was in early 2012 that he realized he would need much more guidance with legal issues. At the time, he was working for US Airways and the airline company had just begun discussing a possible merger with American Airlines.

“The US Airways management team reached out to American to see what kind of labor contracts we could negotiate with employees who were not our own,” he said. “This was something that was unique and had never been done before, so we were guided by the good folks at O’Melveny.”

Then, after announcing the merger plan in 2013, the airline companies faced another obstacle: The Justice Department tried to block the merger with a lawsuit, which was ultimately settled later that year.

Despite the successful $17 billion merger, however, Jones noted that the legal challenges have not eased up. Indeed, the Justice Department informed the four largest U.S. airlines – American, United, Delta Air Lines Inc. and Southwest Airlines Co. – in June that it has begun an investigation to detect any illegal price collusion now that the industry is dominated by so few companies.

“We have investigations underway there now by the DOJ that O’Melveny is handling for us,” Jones said. “And we have all sorts of other labor issues that we’re still managing our way through. So in this world, there is lots and lots of legal work that needs to be accomplished.”