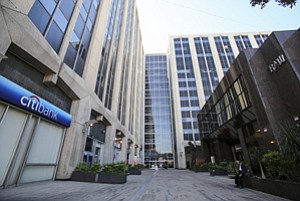 “I definitely think it will cripple the fashion students at Otis to be so far away from the Fashion District,” said Stephanie Collinge, a wardrobe stylist who graduated from the fashion program last year. “The Fashion District is the place in L.A. for students to get inspired by (what’s) around them, working in the fast-paced industry they aspire to be a part of.”

There are more than 4,000 fashion-related businesses in the district, which also has the largest number of fabric stores anywhere in the United States, said Kent Smith, executive director of the L.A. Fashion District Business Improvement District.

Because there is no approximation of those resources near the airport, students will continue to use the district’s resources after the move, Smith said. They will just have to travel to tap into them.

“If we needed fabric or supplies, we could run downstairs to the fabric district during lunch and pick them up,” she said.

But Bence said the school could have better utilized the CMC building.

“We were not involved with any of the showrooms in the (California Market Center),” she said. “We did not have access to any of the material tradeshows held there.”

Smith said he expects that many students will continue living downtown in the fall and commute to Westchester, so their supplies and internships will still be in close proximity to their homes.

With 1,500 units under construction in the Fashion District, it is becoming more residential. The 77-unit Garment Lofts, a $20 million renovation of the 1926 Capitol Garment Building at 217 E. Eighth St., recently opened.

On the office front, Smith said an increasing number of online fashion firms are locating to the district, creating a need for creative office space.

That’s one reason that Jamison’s Lee, who saw the school’s value to the community, isn’t too concerned about the hole Otis’ departure will leave. The CMC, a 2 million-square-foot Class B office building, is roughly 90 percent leased. Its vacancy has decreased by more than 20 percentage points in the last year as Lee commenced a rebranding effort to attract creative tenants.

“Although we were honored to have the school here, this comes as a good opportunity for us … to bring a new exciting tenant to the building,” Lee said.