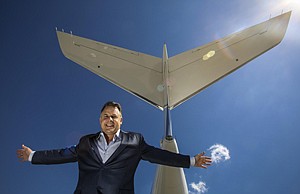 More than planes are taking off these days at Van Nuys Airport.

Revenue has been soaring at the 100,000-square-foot hangar headquarters of private-jet business Jet Edge International since private equity and personal aviation executives took over a small maintenance business catering to the wealthiest of the wealthy – private-jet owners.

By expanding the narrow business model of the original repair shop to managing, operating, crewing, administering and chartering private jets, and more recently brokering sales and acquisitions, Bill Papariella and partner Richard Bard, head of Denver private equity firm Bard Capital Group, have grown Jet Edge’s annual revenue to more than $115 million from about $10 million in four years. They now manage a fleet of nearly 50 jets and have expanded the workforce from eight to more than 330.

Papariella said the growth has come by focusing strictly on large-cabin aircraft, the crème de la crème of private jets, such as Gulfstream Aerospace Corp.’s G650, which costs about $65 million. Jet Edge doesn’t own the planes in its fleet, it manages them for individual owners, many of whom defray the cost of ownership by having Jet Edge lease out the craft for charter flights.

By limiting the types of jets it pilots, repairs and charters, Jet Edge has expanded the concept of economies of scale beyond just ordering replacement parts and the like. Pilots need only be trained on a single class of craft and regulatory paperwork is also limited. That saves his customers – the jet owners – significant money, Papariella said.

Fixed costs are the killer for private jet owners, he said. “Commonality of aircraft allowed our owners to significantly lower the cost of operating the planes. Typically, we save them between $100,000 and $150,000 on an annual fixed-cost basis to own the jet.”

Private jets were not on Papariella’s radar when he and Bard formed Beverly Hills’ Ninth Floor Media in the early 2000s, which invested in movies such as “Mystery, Alaska,” with Russell Crowe and Burt Reynolds; “The Patriot,” with Mel Gibson; and “Sahara,” with Matthew McConaughey.

They sold off the assets around 2008, and Papariella changed careers to personal aviation. He did sales for Braintree, Mass., private-jet business Sentient Jet and industry leader NetJets Inc., a Columbus, Ohio-based subsidiary of Berkshire Hathaway Inc. that buys private jets and divides ownership among several groups. After his contract with NetJets ended, he reconnected with Bard and the two shopped around for a personal jet business they could grow.

They found Jet Edge, a maintenance and repair shop for private jets at Van Nuys Airport, one of the nation’s two busiest airports for personal aviation. It was a top-notch shop, Papariella said, highly regarded and trusted for its operations and technical expertise – and it was the largest independent repair business in the country for large-cabin private jets.

“That industry was shrinking and providing less services for large-cabin clients,” Papariella said, “so I thought there was a seam to be filled doing large-cabin jets management. I thought Jet Edge presented the opportunity to build a large-cabin fleet and create commonality between fleet types and market that to the wealthy population.”

With Papariella and Bard in control, Jet Edge moved to ramp up business. It staffed up with private-aviation executives to manage sales, finances and maintenance, setting aside 20 percent of the equity for new hires.

“A lot of senior executives own part of their companies; this makes it so they don’t want to leave,” Papariella said. “It’s true equity in the company – not in options. That’s made all the difference in the world.”

Now handling sales, Papariella leveraged Bard’s reputation and relationships in wealthy circles to gain customers. He targeted large-cabin jet owners and pitched the company on his ideas of how to manage the costs of owning a jet. Commonality is one method. Another is to pass through operating and managing costs such as fuel, repairs, parts, food and fees, directly to owners so they could see the expenses.

“By providing transparency to the owners, in return they’re way more receptive on areas where we’ve told them we’re making money,” he said.

Papariella’s open about explaining to customers how he makes his money – by taking 15 percent of the cost of flights he arranges for his customers. As an example, an average roundtrip flight to New York from Los Angeles costs $67,000, with Jet Edge getting $10,050.

The approach has worked and Jet Edge’s business has grown entirely by word of mouth, according to Papariella. From the four jets managed by the original business, the firm grew to 12 by the second year and 32 by the third. Jet Edge expects to be managing 51 jets by December, Papariella said.

He said his average client has to be worth $100 million to afford the private jets the company manages – such as those made by Gulfstream, Bombardier Inc. and Dassault Aviation.

Jet Edge’s new business model has kept Michael Baumann, founder and chief executive of development company Brel Capital in Fort Lauderdale, Fla., a customer for five years with his Gulfstream G200. He flies it 100 to 150 hours a year, Baumann said.

“I have never used another company similar to Jet Edge simply for the reason that there are no others that can compare with Jet Edge’s level of professionalism, experience, maintenance, or plain and simple mantra,” Baumann said.

Jason Arnold, a research analyst tracking aircraft leasing companies for RBC Capital Markets in San Francisco, said focusing on large-cabin jets is unique in the personal aviation industry and he believes that the narrow focus has helped keep costs down.

“If you have multiple types of aircraft, getting pilots certified individually can be a very high-cost endeavor,” Arnold said. “And on the maintenance side – that’s absolutely, positively cheaper.”

But Arnold also said there are conditions to success. Companies such as Jet Edge would need to be located in the busiest cities for airplane travel, such as Los Angeles; New York; San Francisco; and Washington, D.C. In addition, being profitable means competitors will copy what you do, and those such as Jet Edge have to manage their risk well because private jets, even for the wealthy, are discretionary items.

“Higher-cost items tend to be cut first, so you don’t want to have your 100 airplanes grow into 200 at the top of a cycle,” Arnold said. “But if you’re methodical and you grow into a demand by being a driver, then you should be able to manage through business cycles.”

Jet Edge’s newest ventures include negotiating aircraft purchases and sales for customers. It’s handled about $1 billion worth of deals in the past 18 months, with Jet Edge taking a commission of 1 percent to 5 percent, Papariella said.

Another growing area is maintenance of government-owned planes. In addition, Jet Edge recently began offering one-way charters that cost about 50 percent to 60 percent of what a round trip costs – think $34,000 to $40,000 for a one-way trip to New York from Los Angeles rather than the $67,000 for a round trip. So far, the planes have returned to Van Nuys with paid flights within three days of a one-way trip, he said, and September trips were sold out after one month of starting the service.

“It’s a revenue generator for the owner, and for the charter customer it’s an economical way to get to a major city,” Papariella said. “I didn’t come up with it. We entered that game on the backs of other people doing it.”