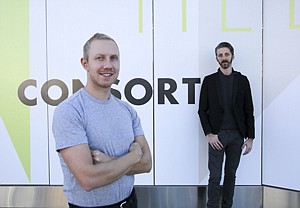 Hiring top talent and grabbing the attention of customers isn’t easy, so some companies are getting more creative about how they go about it.

They’re becoming B Corporations, and companies certified as such can promote what they consider the greater good of their employees, the environment and other factors besides just profits.

Many businesses report that by implementing new policies and changing existing ones to align with B Corporations’ do-good-to-all mission – albeit with a significant investment in time and money – they are growing as a result.

It proved to be a wise move, Clarke said: Sales have grown 30 percent since Dogeared became a B Corporation. The new policies attracted top talent – directors, particularly – that in turn helped drive sales.

The firm now gets hundreds of resumes for key positions, Clarke said, from which they can choose the best for their needs.

“Most of our directors owned businesses much larger than Dogeared and want to work for a company that makes a difference and not just a number,” Clarke said. “It’s really helped tremendously to grow our business and bottom line.”

Attracting top talent is a key advantage of B Corporations, said Bernice Ledbetter, professor of leadership ethics for Pepperdine University’s Graziadio School of Business and Management in West Los Angeles. Ledbetter teaches millennials and said the socially conscious group looks for purpose-driven companies to work for and to buy from.

“The connection between B Corporations and environmental sustainability and social responsibility, is a really nice triangle,” Ledbetter said, “and within that triangle is the opportunity to attract the best in the marketplace.”

Companies are certified as B Corporations if they score at least an 80 on an assessment by B Lab, a Wayne, Pa., nonprofit that ranks how their operations and policies impact employees, customers, the community and environment. The highest received so far has been 180, according to B Lab. Companies have to be recertified every two years.

Santa Monica financial services firm Abacus Wealth Partners has a score of 143. It invests in environmentally responsible companies but doesn’t make anything, so it ranks only a 10 on its environmental impact. But it ranks 43 on how it treats employees because of a generous vacation policy, revenue sharing, an equity buy-in plan and other programs. It also shares data on company revenue and expenses with employees, giving it high marks for transparency and accountability.

“We have exceptionally low turnover – we have about 50 employees and have one on average quit a year,” Kessel said. “That definitely makes us stand out. The financial services industry has high turnover because most (firms) are sales oriented and people jump from one firm to another.”

The firm is also growing. Abacus became a B Corporation in 2007 and since 2012 it has been on Inc. magazine’s 5000 Fastest Growing Companies list, moving up each year, and has grown 74 percent over the past three years, according to Inc.

There are now more than 1,400 B Corporations worldwide, up from 205 in 2009. B Lab doesn’t track numbers by region, but Los Angeles County is estimated to have about 20, including Santa Monica’s Honest Co., a maker of eco-friendly baby products.

The logo graces the website of West L.A. waterless urinal manufacturer Falcon Waterfree Technologies, a B Corporation since 2013. The company became certified to stand out in an increasingly crowded market for products that conserve natural resources, said Marketing Director Andrea Chase, and sales are growing.

To help businesses cut their water use, Falcon devotes staff to help set up and manage rebate programs that normally would be done by water districts. Under the program, local water districts provide rebates to companies that buy waterless urinals. Falcon makes money by selling the urinals and the replacement cartridges for them, but that revenue helps Falcon donate its urinals and other products to community parks, providing it valuable exposure, Chase said.

“We’ve seen sales numbers skyrocket because of this very relevant issue,” she said. “Not everybody can be (a B Corporation), and it differentiates you in a marketplace hungry for anything that sounds sustainable or sounds good. This is the real deal.”

Gathering paperwork, implementing new policies and paying for them are costs business owners say they spend to get certified and recertified as B Corporations.

Downtown L.A.’s Apolis, which partners with artisans in countries such as Bangladesh and Peru to make tote bags and men’s clothing for customers that include Seattle’s Nordstrom Inc., spent two years trying to get certified as a B Corporation before achieving it in 2012.

Changes it made as part of its compliance included a comprehensive audit of its supply chain, installing green elements into its downtown L.A. retail store in 2011 and paying toward employee health insurance, said co-founder Shea Parton. The return: 30 percent growth over the past two years – one year after getting certified.

The move will really pay off when consumers start scrutinizing apparel makers like they now do with food sources, Parton said.

“I think that’s what’s going to make us relevant in the next 10 years – how we source, how we talk to and partner around the world,” Parton said. “A larger company is going to have a really hard time changing to do that.”

In addition to time and money, another downside to B Corporations is that shareholders are not the only stakeholders, said Spencer Sherman, executive chairman of Abacus.

“In a B Corp, the stakeholders include the employees, the clients, the vendors, the earth, the greater community,” Sherman said. “The B Corp must answer to all of these stakeholders, most of whom are not solely interested in maximizing profits.”