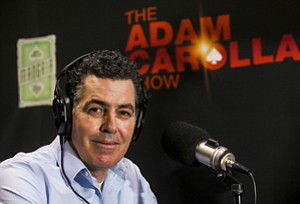 Sounding Off: Adam Carolla in the studio at his podcasting company in Glendale. Photo by Ringo Chiu.

In just six years, L.A. broadcaster Adam Carolla has gone from podcasting pioneer to king of an established medium.

This month, the former radio host signed a five-year contract with Beverly Hills’ Podcast One to keep hosting “The Adam Carolla Show,” whose five episodes a week garner 5 million downloads, making it the most listened to podcast on the planet, according to the Guinness Book of World Records.

The 51-year-old comedian is at the forefront of a money-spinning digital platform that’s got advertisers flocking to the format.

“Unlike every yahoo who tells the Guinness Book their fingernails are 4 feet long, this world record translates into actual monetary value,” said Carolla. “The sales people certainly bring it up when pitching my show to advertisers.”

Founded in 2012, Podcast One makes money by selling ads across its network of 200 shows. It then shares revenue with programmers such as Carolla, whose Glendale company Carolla Digital produces not just his show but also a dozen others for Podcast One.

“Madison Avenue knows the audience numbers are a thousand times more accurate for podcasts than TV and radio,” Carolla said. “Those are, virtually, still being done with an abacus and a golf pencil, while computers were made to measure this stuff.”

The increase in advertising dollars has allowed his show to turn a profit and gave him the opportunity to produce those other podcasts, such as magician Penn Jillette’s “Penn’s Sunday School” and “Dr. Drew,” hosted by Dr. Drew Pinsky, Carolla’s former colleague on the “Loveline” TV and radio shows.

Carolla Digital’s revenue has increased every year and in 2015 it will generate $5 million in sales, according to Carolla.

The rapid growth of his podcast empire, which saw him overtake previous podcast world-record holder Ricky Gervais, is mirrored by the industry itself. Each month, 46 million Americans listen to podcasts, up from 39 million last year, according to a 2015 Edison Research and Triton Digital study.

Various trade sources value the podcast advertising industry at approximately $50 million annually, but there’s a consensus that the market will grow quickly thanks to an increase in awareness and availability.

For example, following in the recent footsteps of London streaming business Spotify Ltd., Google Inc. recently announced it will soon offer podcasts as part of its Google Play service. Apple Inc. has long been in the podcasting business and there are currently more than 250,000 podcasts on iTunes.

Podcast One, which made $12.5 million in revenue last year, has 90 major brand advertisers – more than double from a year ago. That type of growth prompted Minnesota broadcasting veteran Hubbard Radio to buy a 30 percent minority stake this summer for $12 million.

The medium also got a huge boost in June when President Barack Obama appeared as a guest on comedian Marc Maron’s podcast, “WTF.”

“Listener engagement, whether through broadcast radio or digital and mobile apps, is enabling advertisers to reach and interact with consumers at unprecedented levels and podcasting is another opportunity for advertisers to benefit,” said Farber.

“Comedy is the most shareable content available, so sponsoring content like Carolla’s gives advertisers far more frequency due to the large amount being shared across devices,” said Latham. “For Adam to achieve these numbers speaks volumes for his ability and for the audience’s ability to find and support content that speaks to them.”

“When you put the largest advertising podcast advertising network together with the most important revenue generating programming in the business, good things happen,” said Pattiz.

Carolla said he was happy to stay put because the relationship has been mutually beneficial.

“I wanted security and consistency in an uncertain industry where the pie is getting deeper and the competition is growing,” he said. Plus, “those guys have been selling the bejesus out of my show.”

Before partnering with the podcasting firm three years ago, Carolla had been flying solo since launching the show in 2009, when there was no business model for the format.

“I was an old-school radio guy,” said the former KROQ-FM (106.7) host who went on to replace Howard Stern on CBS Radio in 2005 after the infamous shock jock signed a five-year, $500 million deal with New York satellite radio firm Sirius XM Holdings. Carolla took Stern’s slot in major markets, including Los Angeles, starting in January 2006. But that version of “The Adam Carolla Show” failed to hit the same heights and was canceled three years later. It was then that Carolla saw an opportunity in the emerging medium of podcasting.

“It was like I had a gasoline refinery before the internal combustion engine was created,” said Carolla, who spent $175,000 of his own money to set up a studio in Glendale, rent bandwidth and start broadcasting.

“I had no backers, no investors, lots of money going out and nothing coming in the front door,” he continued. “It was by no means a slam dunk. But I eventually built up an audience and when you do that, in whatever format, people want to capture those eyes and ears and sell product.”