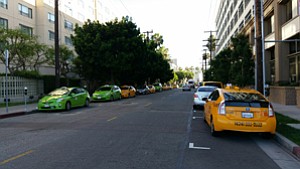 Taxis have been flooding LAX lately, overwhelming the airport’s parking system and spilling out onto the streets of Westchester and the Century Boulevard corridor – causing headaches for businesses and hotels in the area.

Why the sudden surge of taxis? Passenger traffic is booming at Los Angeles International Airport, and regulations there have made it one of the only places in town where taxicabs still have an edge over increasingly ubiquitous ridesharing services Uber and Lyft.

The problem, building for years, has reached a boiling point, with more than 100 taxicabs at a time often taking up parking spaces meant for local businesses and their customers. Making matters worse, cabs have lately been joined by scores of Uber and Lyft drivers who can’t pick up passengers within the airport but often park at hotels or other locations as they wait for passengers who take free shuttles out of LAX.

“There is no way to understate the impact and disruption that all the taxicabs, limos and other vehicles have had on the businesses here,” said Don Duckworth, executive director of the Westchester Towne Center Business Improvement District, who has been getting complaints from businesses. “I had a business owner tell me yesterday that her customers didn’t have a place to park to get to her office because of all these taxis and rideshare cars. She lost that business.”

Even worse, local business leaders say some taxi and rideshare drivers are throwing their trash on the street before going to pick up customers, leaving local property owners with the cleanup tab.

The situation has grown so bad that city and airport officials held two meetings last week to address the problems. But solutions – chiefly the opening of additional parking lots – are months away and the problems are likely to get worse in the meantime as the peak summer travel season approaches.

“This has moved beyond just an inconvenience – it’s now taking away customers,” said Laurie Hughes, executive director of the Gateway to L.A. Business Improvement District, which represents property owners along Century Boulevard.

For decades, the number of cabs allowed into the airport has been tightly controlled. The city’s fleet of 2,360 taxis is divided into five groups – labeled A through E – with only one group allowed into the airport each day. Those taxis park in a holding lot at Sepulveda Boulevard and 96th Street, waiting for dispatch calls to pick up arriving passengers.

As a rule, taxis that don’t have that day’s letter have not been allowed into the airport to pick up fares. But there’s an exception: During peak travel periods, such as the Sunday after Thanksgiving, the cab dispatch service can call for additional taxis, a process known in the industry as a “pink call-up.” These call-up periods generally last about 10 to 15 minutes.

Until recently, those call-ups happened just a few times a week. But as passenger counts have grown at LAX – reaching a record 71 million travelers last year and on pace to surpass that this year – the number of call-ups has also increased, as has the number of taxis converging on streets around LAX because they hope to be called in. They park on the streets because they’re not allowed in the holding lot on Sepulveda.

This year, though, the system seems to have broken down completely. According to figures from Authorized Taxicab Supervision Inc., the dispatch company that works under a contract with the airport, there were a total of 3,800 call-ups for additional cabs over the past 12 months. That’s an average of more than 10 call-ups each day; on busy travel days, that number can soar to 20.

That’s plenty of opportunity for cab drivers to pick up airport fares, long considered the most lucrative in the business.

“At times, there are over 100 cabs waiting for these pink call-ins,” said Aydin Kavak, a driver with Yellow Cab of Los Angeles.

Other factors, too, are pushing more cabs toward the airport.

As Uber and Lyft have cut into the local taxi market – nearly 30 percent of taxi market share has been lost over the past year alone – airport fares have become even more dear to cab drivers.

Airport regulations that allow cabs to pick up passengers at the airport but prohibit pickups by Uber and Lyft have made LAX one of the only places where taxis have a clear advantage over generally cheaper ridesharing services.

Kavak said the ridesharing services are also inadvertently boosting calls for taxis. Many travelers who used to drive themselves to the airport and park in a long-term lot are taking rideshare services instead because they are cheaper. But because rideshare companies are not allowed to pick up passengers when they return to LAX, some of those passengers are taking cabs out of the airport.

As taxis wait to be called up, they’re taking up street parking spots in neighborhoods surrounding the airport. Because they have to respond quickly if there’s a pink call-up, drivers want to be as close as possible.

“There just aren’t that many places to park and make it inside the airport within that 10-minute window of the call-up,” Kavak said.

Parking spaces closest to the access ramps into LAX – such as next to the In-and-Out Burger on Sepulveda near Westchester Parkway and along 98th and Vicksburg Avenue – are in highest demand by taxi drivers. Often, lines of cabs six or seven deep are parked in these locations.

Free spaces are most sought after, but taxi drivers will also park at meters, feeding them when parking enforcement officers make their rounds.

Inevitably, drivers park in spaces meant for local businesses and hotels, inconveniencing customers and patrons of those facilities.

Cindy Williams, who operates a conference center in an office building along Sepulveda near Westchester Parkway, said the parking issue is the top complaint among her clients, including people who rent meeting space, pick up mail or have virtual offices.

“These clients used to use the free parking on the street,” Williams said. “Now they have to pay to park in the parking structure and there are times when even that is full. It’s a big-time inconvenience.”

Then there’s the trash. Area business leaders say a small minority of cab and rideshare drivers dump their trash on the street or sidewalk or in overstuffed trash cans before leaving to pick up fares. That sticks property owners with cleaning up the mess, said Miki Payne, operations manager for Drollinger Properties, a major landowner in Westchester.

“We’re at a tipping point right now where we need to find a solution or solutions to the problem or it could really start affecting businesses big time,” said Christina Davis, chief executive of the LAX Coastal Chamber of Commerce.

After months of largely futile prodding by local business leaders, city and airport officials are only now waking up to the problem. A spokesman for City Councilman Mike Bonin, whose district includes the airport and surrounding neighborhoods, said they planned to broach several possible solutions at a meeting with local business leaders late last week.

The main solution is more and expanded holding lots for both the taxi and rideshare drivers. Airport officials are already looking to open an additional holding lot for rideshare drivers after Mayor Eric Garcetti announced last month that he wants to see the rideshare companies able to pick up airport passengers by the end of this summer.

Also, because of ongoing airport construction, the current taxi holding lot is scheduled to be relocated to a larger space in September.

But the hundreds of taxis waiting for the pink call-ups will not be able to use that lot. Local business leaders and taxi industry officials say an additional holding lot for those taxis is necessary.

Last week, in an email to the Business Journal, city Taxicab Administrator Thomas Drischler said he was in discussions with airport officials about opening at least one additional taxi holding lot and already has a location in mind.

William Rouse, general manager for Yellow Cab, has another suggestion for fixing the problem: Allowing more cabs into the airport each day by dividing taxis into four lettered groups instead of five.