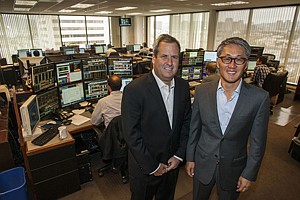 To most lenders, cash flow is king.

But there are plenty of companies with substantial assets that don’t regularly spin off cash and don’t receive the royal treatment when they look for credit.

That divide looks like an opportunity to West L.A. finance firm B. Riley Financial Inc. Armed with an anchor investment from an affiliate of New York private equity giant KKR & Co., the firm last month launched asset-based lender Great American Capital Partners, which aims to find and cater to those overlooked companies.

“There are a ton of cash-flow lenders in the marketplace,” said John Ahn, president of B. Riley. “But our strategy doesn’t conflict with a lot of people because it’s asset focused.”

In launching Great American Capital, B. Riley, a brokerage and investment bank, hopes to take advantage of its existing infrastructure. The firm last year acquired Great American Group, a valuation and liquidation company that gives B. Riley expertise in valuing the assets it intends to lend on, and B. Riley’s investment banking operations should provide the asset-based lender with a pipeline of potential borrowers, Ahn said.

“We understand collateral and assets better than any other player in the marketplace,” Ahn said. “We will also have so many more proprietary deal sourcing opportunities than anybody else.”

Bryant Riley, chairman of his eponymous firm, had served on Great American Group’s board for five years before buying the company through a reverse merger last year. During that time, he said he noticed the firm had a knack for accurately figuring out how much things are worth.

“I was intimately familiar with that company’s ability to recognize the value of assets,” he said.

Once the companies merged, Riley began to consider building a corporate lending arm that leveraged that capability.

He and Ahn said today’s banking climate has opened the window of opportunity a little wider for an asset-based lender. Tighter regulations and capital requirements have made lending to smaller companies less profitable for commercial banks. Those companies still need credit and that’s created plenty of opportunity for alternative lenders, including business development companies.

“Banks are getting clamped and they cannot be as aggressive as they have been in the past,” Ahn said. “The people who have taken advantage of that are a lot of the nonbank lenders, especially the business development companies. But the vast majority of those guys are cash-flow lenders.”

While Riley and Ahn envision Great American Capital serving plenty of companies that can’t get a bank loan, there are also opportunities to partner with banks and supplement the credit they are willing to extend.

For example, Great American Capital’s first deal, a $17.5 million senior debt facility for Baldwyn, Miss., fabric retailer Hancock Fabrics Inc., carried a double-digit interest rate. But it was made in conjunction with a $100 million revolving loan from Wells Fargo & Co. with an interest rate of about 3 percent – making the blended rate on the combined facility more affordable.

Ahn said Great American Group’s years of valuation experience will allow the new firm to stretch beyond where most banks are comfortable lending, giving borrowers more favorable loan-to-value ratios on their assets.

“We’re really using the expertise of our platform to provide what some people might see as aggressive amounts of capital,” he said. “But we don’t view it as aggressive, because we actually know what the collateral will get on the secondary market.”

And Great American Capital’s asset-based model makes it a fundamentally different – and safer – business from what business development companies and other similar firms are engaged in, Riley said.

“I view companies lending at five-times cash flow as very different from what we’re doing,” he said.

As good as Great American Capital might be at valuing assets, there can be a gulf between appraised values and what things actually sell for when companies are under the gun. Sometimes, the difference is big enough to turn a good loan into a bad one.

Guy Fuchs, president of Wells Fargo Capital Finance in Santa Monica, the bank’s asset-based lending arm, said appraisals are only one piece of a puzzle and he’d advise against overemphasizing asset valuation in underwriting loans.

“Appraised value is a valuation at a point in time,” he said. “Things change in the life cycle of a business.”

Even if assets are valued based on how they’d sell in the worst-case scenario, Fuchs said prices would be affected by whether other companies in the same industry would also be selling assets at that time, which is a lot harder to predict.

Although a down market might create some liquidation challenges, Ahn believes Great American Capital’s lending business would actually perform best during a tough economy.

“We would argue we would do better in bad credit markets,” he said. “In bad markets, lenders would pull back, which would give us less competition and the ability to price more aggressively. More companies would be starved for capital.”