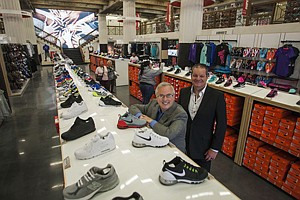 Herds of shoppers shuffling through high-end malls are a big draw for many retailers, but not for footwear chain Warehouse Shoe Sale.

You won’t see a WSS store at Beverly Center or Santa Monica’s Third Street Promenade. Instead, the growing Gardena company has a different strategy of opening standalone shops in working-class urban areas, most of them in central Los Angeles County. Case in point: The company last month opened a 24,000-square-foot flagship store in L.A.’s Westlake neighborhood, just west of downtown.

Though that store is bigger than the typical WSS and features a few new design elements, it still reflects the typical location for the retailer – large, freestanding and not close to any competitors. The company will soon be looking for lots of properties that meet that description as it plans to open as many as a dozen more stores this year, then open between 15 and 20 stores annually starting next year.

Mark Archer, president of WSS, said the company has little interest in opening in malls and prefers locations in neighborhoods where its shoppers, most of them Latinos, live.

“Why go to a place where there’s a Foot Locker and five other derivative brands and try to fight it out?” he said. “We are what we are – a neighborhood retailer. And where we have our stores, there’s not a lot of competition.”

Real estate is key to the retailer’s strategy in other ways, too. Sticking to big stores in cities such as Huntington Park, rather than small but prime retail space in tonier areas, means WSS can snag properties on the cheap while still pulling in the kind of sales volume that’s motivated Nike and other brands to expand their relationships with the retailer.

Christopher Maling, executive vice president at Colliers International in downtown Los Angeles, said WSS’ strategy is actually quite simple and that the cheap real estate it looks for is a good fit for the company’s customer base.

“Their model is to sell at a price where they can have the consumer buy more than one pair of shoes or buy for the entire family,” Maling said. “It’s a value-conscious proposition and their locations appeal to the demographic that would support that.”

Eric Alon founded WSS and parent company Eurostar Inc. in 1984, selling sneakers out of the trunk of his car at swap meets. What started as a side job to help the Israeli emigrant pay for college has become a business with 1,300 employees and 68 stores, almost all of them in the L.A. area.

On average, locations are between 10,000 and 14,000 square feet. The company can handle such large locations because it operates in low-cost neighborhoods. For example, figures from CoStar Group Inc. show average retail asking rents around Norwalk, where WSS has a location, are $2.15 a square foot a month – less than half the price of Santa Monica’s average asking rate of $4.97 a foot.

“Looking at where they’re located, it’s probably two things – closer to their consumer and to limit occupancy costs,” he said.

Colliers’ Maling also pointed out that WSS is known for owning many of its properties and is willing to renovate space that’s not set up for retail if it can get a good price.

WSS is leasing the site of its new flagship store, located in a historic landmark building formerly known as Young’s Market Building.

It’s on a corner lot at Seventh Street and Union Avenue near two elementary schools, an auto collision center and a handful of mom-and-pop shops.

The store features new design elements and products, which WSS plans to roll out in other stores. For example, it is broken into sections, with areas for different brands or types of shoes. There’s a Converse section and a “soccer zone,” where cleats line the shelves and fake green turf covers the floor.

The new store, and a handful of other WSS locations, also features a special section devoted to Nike’s Air Jordan collection, complete with a museumlike display showing all 23 iterations of the shoes.

The fact that WSS has so many Jordans on offer, many of them in rare colors and designs, is a sign of the retailers’ clout in the shoe business. Nike is choosy about who sells its rarer offerings and WSS is now part of that club.

“It’s by far the most difficult product line to get,” said Dan Nuthals, WSS’ chief merchant. “We’ve carried Nike for at least 15 years, but we’ve now had the elevated portions within the last two years.”

As WSS widens its selection to include more premium items, it’s also expanding its territory. Last year, the retailer opened a store in Las Vegas, the company’s first outside of the Golden State. Next, it’s looking to open in Phoenix and Albuquerque, N.M. And as with its strategy so far, it’s all about real estate.

“We love opening stores in L.A. because people know us and we see instant success on the sale side but there’s not a lot of sites left,” Archer said. “That’s why we’re moving into other areas.”