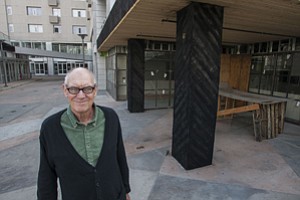 If you build it, they will come.

Unless, of course, they can’t see it.

Surrounding a courtyard some 20 steps below street level off Main Street, about 60 percent of its 150 retail units remain vacant.

“Candidly, creating appropriate foot traffic to retail was a challenge; out of sight, out of mind was the problem then and it’s the problem now,” said Derrick Moore, a principal at the downtown office of Avison Young who was the broker for Medallion in its predevelopment stage. The retail portion of the project, at 334 S. Main, is now being marketed by Farkhondehpour’s company.

Douglas Hanson, principal at downtown firm HansonLA Architecture, said that below-grade retail spaces can be successful as long as they have a relationship with the street, visual access so it’s easy to understand how to get there and a mass of stores on the lower level. He pointed to Brookfield Office Properties’ Fig at 7th retail complex, which has signs visible to drivers and pedestrians, as a good example.

“In London, people expect stores to be on the lower levels, but in Los Angeles, there has to be a lot of them together to get people to go down there,” he said.

Medallion’s design, he added, with the retail in the center of the project, makes it seem private, as if it is communal space for residents rather than retail accessible to everyone.

Sluggish leasing at the commercial portion of the project was an obstacle to Farkhondehpour’s efforts to start the second phase of the residential development. He and his partner, Morad Ben Neman, wanted to refinance some of the debt on the property to start that phase and ended up taking a $33 million loan from Beverly Hills mortgage banking firm Quantum Capital Partners.

“The sponsor had struggled to stabilize the ... retail space, making it difficult to find a lender willing to refinance the debt on the project,” said Jonathan Hakakha, Quantum’s managing director.

Farkhondehpour and Neman originally envisioned the retail space as one filled with general merchandisers and wholesalers. But after halting construction for a month in 2008 and downsizing the project in the downturn, the pair still struggled to lease it. They began discussions with John Edwards, president of Calabasas farmers market operator Raw Inspiration Inc. Last year, they brought Edwards in as a partner in the retail portion of Medallion’s $80 million first phase.

Neman, who could not be reached for comment, was arrested in September when federal agents raided the Fashion District. As chief executive of fashion company Pacific Eurotex Corp., he was indicted on charges that he and others at the company laundered roughly $370,000 in cash for an undercover agent. The case is still pending trial, according to Thom Mrozek, spokesman for the Justice Department.

Farkhondehpour said Neman’s involvement in Medallion has not changed and the indictment has not affected the project.

Farkhondehpour recast the space the way Edwards envisioned it: as a haven for foodies.

Edwards acts as a curator, bringing in chef-driven restaurants such as Sushi Zo, one of two now open at the center.

“It’s $400 a couple and there’s no menu,” Farkhondehpour said, referring to prices that start at $160 a head. “They get all the business traffic from people who are in the know.”

Even after all those restaurants move in, however, the retail space will still be widely vacant.

Edwards said that since he took charge of organizing the retail component last year, his choosiness was responsible for the slow leasing, not necessarily a lack of interest. He sought out chefs and artisans looking to open their own businesses for the first time, and he helps them with fundraising and business plans.

Starting on May 16, his company will operate a farmers market in the retail courtyard, which he believes will attract nonrestaurant retail.

While the retail space has disappointed, Farkhondehpour has been encouraged enough by the residential side of the project that he is ready to start construction of a four- building, 470-unit, 360,000-square-foot second phase of the residential component.

Construction will commence as soon as it is entitled, he said.