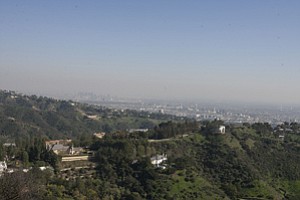 Behind a 16,000-pound gate, a perfectly paved road winds through 157 acres of lush land with spectacular views that stretch from downtown Los Angeles to the ocean. The site, atop the hills between Benedict and Coldwater canyons, is among the last large undeveloped plot in the area.

That could soon change. The co-owners of the property, Charles “Chip” Dickens and Victorino Noval, cleared a major hurdle last week in their effort to build six estate homes atop the mountain at the end of Tower Grove Drive near Beverly Hills.

A decision by a bankruptcy court judge affirmed a deal over the disputed debt on the property, a ruling that could mark the end of a long-running battle between Dickens and Noval’s Tower Park Properties, which bought the site in 2004 for $24 million from the estate of Herbalife founder Mark Hughes, and Alexander Hughes, the 23-year-old son of the company founder. The sole beneficiary of the $400 million Hughes estate, Alexander Hughes has been fighting the sale approved by the trustees for the last six years.

Taken as a whole, the property, dubbed Vineyard Beverly Hills, is now said to be worth more than $1 billion. But Dickens and Noval seem to be sticking to a plan to build six homes on the site, each mansion likely priced at more than $100 million.

Jeff Hyland, president of residential brokerage Hilton & Hyland in Beverly Hills, has an exclusive contract to sell the homes. He said the developers are finalizing contracts with architects and that construction is likely still about a year away. Within the next month or so, he said, a private vineyard will be planted for future residents to share.

“It will probably be the best and most exclusive subdivision built in the country,” Hyland said.

At least on paper.

Despite a ruling last week that appeared to signal an end of the litigation, Eric V. Rowen, co-chair of the real estate litigation practice at Greenberg Traurig representing Hughes, vowed to press on.

“It’s not over, and we think the bankruptcy court’s decision is a travesty,” he said.

Rowen has argued that the sale to Noval and Dickens was botched by the estate’s trustees at the time, claiming they failed to act in the trust’s best interests.

Court records show various trust-owned entities loaned Tower Park $50.3 million to help finance the sale and future construction. Tower Park defaulted on the loans shortly after the sale closed, and, with interest, the debt ballooned to about $80 million. The Hughes trustees, however, reduced that amount to $58 million in 2013.

The Hughes side convinced a superior court judge in 2013 to replace the three trustees who struck the deal with Noval and Dickens, and it has since been fighting to collect the outstanding debt from Tower Park, challenging the reduction of the indebtedness.

The battle bounced between federal courts, and in August a federal district court judge sent the matter to bankruptcy court to resolve whether the $58 million settlement amount could stand. The bankruptcy judge affirmed that deal last week, a decision that is expected to be signed off on by the district court, which sought guidance from the bankruptcy judge.

Nevertheless, said Rowen, “we think the bankruptcy court was wrong, and anticipate that the district court will recognize that.”

None of that money has been paid, he said, and at least interest should be added to the amount.

On a recent day at the Tower Grove property, Dickens swapped his black Mercedes-Benz convertible for a golf cart marked “Vineyard Beverly Hills.” He hopped behind the wheel and cruised a half-mile uphill to the first lot. Miraculous views of the sprawling hills surrounded the developer, who gleamed every time he talks about his land.

“This is what we call our little living room,” Dickens said as he pulled up to the second lot, where he had created a patio large enough to host a party and furnished it with elegant outdoor chairs, sofas and coffee tables. Despite the smog floating above the city, the breathtaking view stretched from downtown all the way to the Pacific.

Dickens was escorting a bride-to-be and her family who plan to hold her wedding at the site. Though the wedding would be the first at the site, Dickens and Noval have rented it out for large parties, including a December charity bash hosted by Rihanna and attended by a slew of A-listers including Brad Pitt and Kim Kardashian.

The only permanent structure on the property is a small building that would run power, water and an irrigation system for the community, should it ever be built.

As fabulous as the site is, it has for decades resisted development.

Princess Shams Pahlavi, the sister of Mohammad Reza Pahlavi, Iran’s last shah, purchased the mountaintop property in the 1970s with plans to build a $20 million palace for her brother. When that plan fell through, she sold the land to media mogul Merv Griffin in 1987.

Griffin intended to construct a 58,000-square-foot mansion, a helipad and a couple of lakes, but – again – plans stalled. He did grade the top of the mountain to level it off and subdivided the property into six lots for possible development.

Shortly thereafter, Mark Hughes bought the land for $8.5 million, reportedly the highest price ever paid for a home site in Southern California at the time. The Herbalife founder was slated to build a $50 million, 45,000-square-foot estate for his wife at the time, Suzan Hughes, and their son, Alex.

Those plans came to halt after Mark Hughes died suddenly in 2000 at the age of 44, reportedly the result of consuming a lethal amount of alcohol and antidepressants. His death was later ruled accidental. Alex, who was 8 at the time, was left with a trust now worth about $400 million that he’s set to inherit when he turns 35 in 2027.

Among the assets of the trust was the Tower Grove property. Conrad Klein, Christopher Pair and Jack Reynolds, the trustees at the time, agreed to sell the 157-acre plot in 2004 to Dickens for $24 million. But Hughes’ representatives objected, arguing the sale had been mishandled. A Los Angeles Superior Court judge removed the trustees in 2013 and replaced them with Fiduciary Trust International of California.

Despite the reversals at the federal level, Rowen, Alex Hughes’ attorney, said the trust is still owed a great deal of money.

“In terms of the amounts that are owed and have been owing on the settlement agreement since (the replacement trustee) was appointed, there have been no payments made,” he said. “This basically has been a free ride for bankrupt deadbeats.”

Dickens, who declined to comment about the litigation, now seems eager to push forward with his own plans, though he wouldn’t discuss details.

A November Facebook post on the Vineyard Beverly Hills’ page announced plans to sell the property to a single individual instead of constructing six “mega estates previously planned.”

“Appraising this property is no different than appraising the two sports team(s) in Los Angeles, which were valued around $800 million and sold for $2 billion,” the post says. “This is one-of-a-kind and unlike a sports team, it cannot be duplicated.”

A website for the property earlier this year indicated the owners “will not consider looking at any offers under $1 billion.” That text has since been taken down, replaced by a note that the page is temporarily under construction.

But Hyland, the exclusive listing agent, said plans to build six homes on the mountaintop are moving forward.

“That’s so bogus,” he said of the $1 billion valuation. “I don’t know who came up with that story. It’s never been on the market.”

Hyland said each home would be about 40,000 square feet, and at today’s going rate for L.A. megamansions, that could yield as much as $120 million for each home.

Attempts to reach Noval, who pleaded guilty in the 1990s to mail fraud and tax evasion as part of a $60 million scheme to defraud the Department of Housing and Urban Development, were unsuccessful.

Noval was eventually sentenced to federal prison in 2003.

The developers are now waiting for a federal judge to clear the way for them to begin marketing the site, though there is no definitive time line for that action.

Until then, the stunning views will be taken in by the select few who are allowed to pass through the massive gate at the end of Tower Grove Drive.