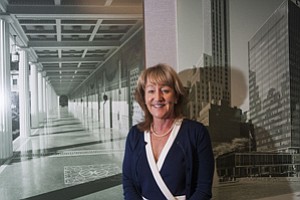 Local business groups have been united in opposition to Los Angeles Mayor Eric Garcetti’s proposal to raise the minimum wage in the city.

Except for one: Last month, the Los Angeles Business Council, a group little-known outside City Hall, broke ranks with virtually every other business group and endorsed the wage hike, calling it “part of a broader economic strategy for Los Angeles.”

The move disappointed leaders of other business groups that had hoped to present a unified front as Garcetti’s proposal to raise the wage to $13.25 an hour by 2017 goes before the City Council in coming months.

“The negative implications of the proposed minimum-wage hike on small businesses and Los Angeles’ competitive position within the region are clear enough that a united response on behalf of business would have been best for the Los Angeles economy,” said Carol Schatz, chief executive of the Central City Association, which primarily represents downtown businesses.

But the Business Council’s endorsement represented a victory for Garcetti, who trumpeted it as business support for his wage proposal.

The Business Council “is a very respected advocate for L.A.’s business community and their endorsement will be powerful as the council considers Mayor Garcetti’s proposal,” said Jeff Millman, the mayor’s spokesman, said last week.

Garcetti had made his pitch for the wage hike to all the business groups in town, but so far, only the Business Council, headquartered in Century City, has come on board. It was a move the group’s leaders say was not made lightly.

Other groups – including the “big three” of the Central City Association, Los Angeles Area Chamber of Commerce and Valley Industry and Commerce Association – have all argued that if Los Angeles passes a mandate for a higher minimum wage, it would reinforce the perception that the city is unfriendly to business, drive some businesses out of the city and prompt others to lay off workers.

The Business Council is the latest incarnation of a group that had for decades represented Westwood and Westside business interests. It started in 1930 as the Westwood Village Merchants Association and morphed into the West Los Angeles Chamber of Commerce. Under the leadership of the late Dorie Pye, the group swelled to more than 1,000 members.

In 1988, the chamber changed its name to the Los Angeles Business Council and began to focus more on regional issues. But the group fell on hard times in the 1990s and by the early 2000s it was $60,000 in debt.

“I wanted this to be a business-focused and socially cognizant organization that could make a difference in key policy areas such as energy conservation and affordable housing,” Ziman told the Business Journal last week.

The Business Council is perhaps best known for its annual housing, transportation and jobs summit, usually headlined by the mayor.

Today, the group’s 450 members are mostly developers and other firms that serve the real estate industry, such as architects, engineers and real estate attorneys. Notably absent are firms in low-paying industries such as restaurants and garment manufacturing. Critics point out that a minimum-wage hike would cause little direct pain for the group’s members.

There is some overlap in leadership with other local business groups. For example, Alan Rothenberg, chief executive of Century City lender 1st Century Bancshares, is a vice chair; two years ago, he was chair of the L.A.-area chamber and he remains on both boards.

Rothenberg said he had no trouble reconciling the different stances the two boards have taken on the minimum-wage issue, though he did say his own view aligns more closely with the chamber.

“You can’t be in agreement 100 percent of the time with every group you belong to,” he said.

Leslie said what distinguishes the Business Council from other local business groups is the role research plays in its advocacy, and the group’s willingness to form coalitions with labor or other traditional business foes.

“When you are able to put together a big tent on a key issue, it tends to work better,” she said.

The Business Council has taken positions on issues important to the development community, and on occasion those stands have put it into conflict with other business groups in town.

As an example, eight years ago, in a bid to increase the supply of affordable housing, then-Mayor Antonio Villaraigosa pushed for an “inclusionary zoning” mandate, in which developers of major projects would be required to set aside a certain percentage of units for lower-income residents.

Most local business groups were flatly opposed, calling inclusionary zoning a burdensome mandate that would kill off development projects. But the Business Council chose not to oppose the idea. Ultimately, the plan collapsed under the weight of business and neighborhood opposition.

But the endorsement of the minimum-wage hike marks the first time the Business Council has taken a stand on a policy not related to its core issues.

Board Chair Lipa said that Garcetti approached the Business Council in September and asked for its support. Lipa took the unprecedented step of putting the mayor’s proposal out to the entire membership, not just to board members.

“Because of the sensitive nature of the issue, I felt that this was not something we could leave to the board; we had to send it out to our members to see how they felt,” Lipa said, adding that at least two-thirds of members needed to vote for the group to take a position.

More than two-thirds responded by the October deadline, and 68 percent of those members voted to support the Garcetti proposal.

(Leslie said the group is firmly opposed to another proposal, one that would raise the minimum wage to $15.25 an hour by 2019. The Business Council did not poll members about that proposal.)

Leslie said there was no explicit quid pro quo with Garcetti, though she noted that the mayor has taken steps to address other Business Council concerns, including pledging to build thousands of affordable housing units in the city and promising to reduce the gross receipts tax. Indeed, the Business Council agreed to go public with its endorsement only last month at a signing ceremony Garcetti held to enact reductions in the top rate of the city’s gross receipts business tax.

But that’s not the way other business groups see it. Privately, local business leaders say they believe at least part of the motivation behind the Business Council’s endorsement is an attempt to curry favor with Garcetti.

But mostly, they put the endorsement down to the distinct membership base of the Business Council.

“We’ve come to the conclusion that the Business Council must not have the same number of small businesses that we have,” said Gary Toebben, chief executive of the L.A.-area chamber. “The minimum-wage issue may not be as important to their membership as it is to ours.”

Like the Central City Association’s Schatz, Toebben said he would have preferred that the Business Council not take a stand to support Garcetti’s proposal. Still, he said he does not expect the Business Council’s support will blunt the message that most other business groups are sending to City Hall.

“Most are aware that, except for the Business Council, most business organizations are in opposition to the minimum wage hike and are working with the City Council to minimize its effect should it pass,” he said.