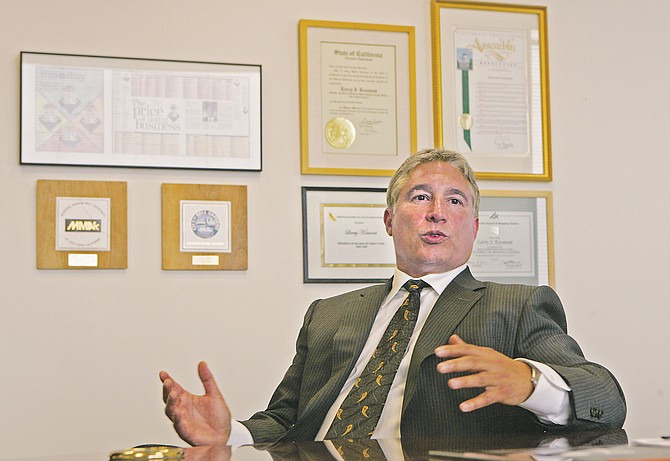 Chief Executive Larry Kosmont of Kosmont Cos. at his downtown L.A. office. Photo by Ringo Chiu.

For the first time, more than half of Los Angeles County’s cities are considered high cost for taxes and fees on businesses, according to an annual survey being released this week. And with more tax increases and minimum-wage hikes in the offing, the cost burden on local businesses is only going to get worse.

This year’s Kosmont-Rose Institute Cost of Doing Business Survey classified 45 of the county’s 88 cities as either “high cost” or “very high cost” when it comes to taxes and fees businesses must pay. That’s up from 44 last year and continues a steadily increasing trend.

Even worse, seven cities in the county, including Los Angeles, Santa Monica and Beverly Hills, are now ranked among the 20 most expensive cities in the Western United States.

What’s more, Kosmont said, at least two local cities are considering tax increases this year or next. Los Angeles just passed a hefty hike in the minimum wage, a move that several other jurisdictions are considering following.

“We’re moving in the wrong direction: Instead of reducing business operating costs to be more competitive, cities keep piling the costs on,” Kosmont said.

L.A. restaurateur George Abou-Daoud has experienced these rising costs at the eight eateries of his Bowery Street Restaurants. He said it’s not just voter-approved taxes, but also government fees, such as a new $2,000 charge he pays for each annual renewal of a permit to sell alcohol. And this is before the city’s enactment this month of an increase in the minimum wage to $15 an hour by 2020 – a move Abou-Daoud vociferously opposed.

“You’re always seeing more taxes and more fees, never the other way around,” he said. “It’s easy to see why businesses that can leave do leave the city. The costs of doing business are so extravagant here.”

The annual survey is produced by economic development consultants Kosmont Cos. of Los Angeles and the Rose Institute of State and Local Government at Claremont-McKenna College in Claremont. It looks at the costs of operating a business – focusing especially on taxes and fees – in 305 cities throughout nine Western states.

Businesses considering expansion or relocation often use the survey to compare operating costs in different cities. Since its launch 19 years ago, the survey has also become an essential tool for recruiters in other states as they come calling on California businesses.

Los Angeles County has traditionally been a high-cost region, especially when it comes to sales and hotel bed taxes, and business license fees. But the trend has been exacerbated in recent years as cities facing the double-whammy of the recession and the loss of redevelopment dollars have scrambled to find additional revenue sources.

Businesses have been a tempting target for revenue seekers, with increases in hotel, sales taxes and utility taxes frequently getting on local ballots and winning voter approval.

Such measures helped raise the total number of county cities in the survey’s two highest cost categories to 45. (The survey only examined 73 of the county’s 88 cities and unincorporated county territory, leaving out cities such as Bradbury and Rolling Hills Estates that lack substantial business bases.)

Kosmont said last week that officials in at least two cities in the county have approached him in recent weeks asking his firm to analyze the impact on business costs of raising hotel bed taxes – an indication more tax increases are headed for local ballots.

On top of all this is the accelerating movement to increase the minimum wage. This month’s high-profile enactment of a minimum-wage increase in the city of Los Angeles has been followed by consideration of hikes in unincorporated Los Angeles County, Santa Monica and West Hollywood.

Kosmont said minimum-wage hikes do not figure in directly to the calculations in the business cost survey because they are not considered a tax or a fee. But he said last week that minimum-wage hikes add to the overall cost pressures businesses face.

“In a way, it’s even worse than a tax or a fee because it hits them on the front line with direct costs that are paid every week or two weeks,” he said.

Particularly galling for some local business owners is the perception that the level of local government services that they receive in exchange for the high taxes and fees is lacking.

“Yes, it’s a high-cost place, but the important thing is what value are we getting for that?” said Dwayne Gathers, who owns an economic development consulting practice in downtown Los Angeles. “We’re definitely not getting the value in improved infrastructure and a more responsive bureaucracy.”

The broader impact of this frustration with the ever-increasing taxes and fees is a drag on hiring employees in Los Angeles. While many companies need to have a presence in the region and California, their executives are constantly looking for ways to minimize that presence, Kosmont said.

“Somewhere a CEO is pondering, ‘How small an office in California can I get away with and still service that market?’” Kosmont says in the survey. “The sales office then goes up in L.A. or the Bay Area, but the bulk of jobs and back-end functions end up in Tennessee, Texas or Arizona.”

That can be seen in the number of high-profile departures of major companies in recent years: Northrop Grumman Corp. decamped for Arlington, Va.; Occidental Petroleum Corp. left for Houston; Toyota Motor Sales USA is leaving Torrance for Dallas; and coffee roaster Farmer Brothers Co. is bound for a Dallas suburb.

“L.A. has increased its payroll jobs by only 2 percent between 1990 and 2015, compared to a 29 percent increase in the U.S. over the same period and 28 percent in California,” said Leron Gubler, chief executive of the Hollywood Chamber of Commerce. “This should be of great concern to everyone and should be sending alarm bells.”