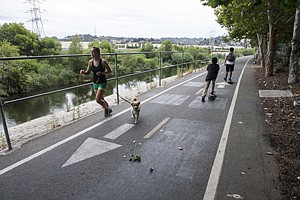 From the hiking trail along the rim of Elysian Park, a couple of miles north of Dodger Stadium, you can see the whole Elysian Valley neighborhood. It doesn’t look like much: less than a square mile of small-scale industrial buildings and single-family homes pushed up against the concrete gut of the Los Angeles River, with barely any activity to be seen.

The neighborhood, colloquially known as “Frogtown,” looks like silence.

But real estate interests envision Frogtown – hemmed in by the 5 and 2 freeways and the river – as the next extension of the city’s hip core.

The tiny pocket, home to about 8,000 people, has nine projects under construction and more than 30 developments and reuse projects in the pipeline. Many believe that the neighborhood, propelled by the promise of a $1 billion river makeover, will soon follow in the hipster footsteps of Echo Park, Silver Lake, Los Feliz, Highland Park and downtown L.A.’s Arts District.

This notion has some community members concerned their neighborhood will get too dense, too fast. Tensions mounted at a Department of City Planning hearing June 9 regarding proposed zoning changes to commercial riverfront lots that include dropping the maximum building height to 30 feet from 45.

“Frogtown has legs, pun intended,” said Greg Tuszynski, a vice president at real estate firm Colliers International who represented Silver Lake gym Klub Gymnastics in a $5 million, 10-year expansion lease into a vacant 40,000-square-foot 1940s airplane hangar that backs onto the river at 1683 Blake Ave. The deal, which closed in April, will change the space from industrial to retail use.

“Prices are half of what they are (on the Westside) and in the Playa Vista market. Frogtown is still kind of off the radar, but it’s hitting a tipping point now where there is a limited window of time before the prices go up dramatically,” said Tuszynski.

After some nudging from Mayor Eric Garcetti, the Army Corps of Engineers, which manages the Los Angeles River because it is a flood-control conduit, last year recommended a $1 billion river facelift proposal. If approved by the Army Corps’ Civil Works Review Board in July, it will go to Congress, where federal funds can be allocated. The makeover would create wetlands and bike trails, among other improvements, along an 11-mile stretch north of downtown through Elysian Park.

“I look at the river through the lens of investing in the river itself, but obviously that has an impact on the adjacent communities,” said Omar Brownson, executive director of LA River Revitalization Corp., a nonprofit that aims to build a greenway along the full 51-mile stretch of the river from the Simi Hills to Long Beach, in addition to other river-focused projects.

In an April report for Century City business advocacy group Los Angeles Business Council, Paul Habibi, a lecturer at the Ziman Center for Real Estate at UCLA, recommended residential development along the river as part of the solution to L.A.’s housing shortage.

Traditionally working class, Frogtown contains light industrial buildings along the river and homes on small lots closer to the freeways.

Despite the interest and activity, signs are not glaring that the neighborhood is changing. Good Eggs, a San Francisco online food delivery startup, opened a distribution center in the old Hostess factory at 2760 Clearwater St. last year, followed by luxury furniture maker Modernica, which moved its headquarters into the building.

It’s hard to get a cup of joe in Frogtown. It also has no supermarket or liquor store, no pharmacy or vintage clothing boutique.

“Commerce hasn’t existed here since the 5 went up,” said Kevin Mulcahy, managing partner at RAC Design Build, an architecture firm in Frogtown that has been a vocal opponent of overdevelopment in the area. RAC recently offered a “smart growth” initiative, suggesting that the density allowed along the river is too high and should be decreased.

“When the 5 came through, it literally bisected the residential community from what had been its amenities and it has never recovered,” said Mulcahy.

Some adaptive reuse projects are starting to change that. Ron Rohrer, a real estate agent and property manager at Glendale firm Pacific West Business Properties Inc., said he drew up a lease agreement with a coffee and sandwich shop tenant for 2902 Knox Ave. that would be a first for the neighborhood. A retail conversion of the 8,256-square-foot former industrial building should be completed next month.

Carle Pierose, a partner at Santa Monica commercial real estate firm Industry Partners, used to only visit Frogtown to meet with architects, including those at RAC. Now, he is leasing two reuse projects that are under construction in the area.

Both projects, Pierose said, will likely be completed by the end of the year, but he expects to sign tenants before then.

The residential projects proposed for Frogtown envision greater density on former light industrial properties. Three proposed developments alone would bring 206 housing units to an area that has only 1,300 residential lots, according to Mulcahy. A report by sustainable design nonprofit LA-MAS in Frogtown said that between October 2011 and December 2014, 39 industrial properties were sold there, 10 of them on the river.

“Commercial use along the river doesn’t make sense and industrial in an area that’s changing doesn’t make sense,” said Jerry Neuman, a representative of the project. “Community-serving retail and housing does.”

The changes, however, are not being universally embraced.

“In with the new (residential development) comes people complaining about welding at 2 a.m., and this is a community that has been allowed to do those things as this is a design-build area,” said Dana Sayles, a land-use consultant on a proposed four-story, 49-unit multifamily complex at 1901 Blake. “The concern is that if people come and live there in close proximity, they won’t be able to do those things anymore.”

Zoning in Frogtown allows for 45-foot-tall residential buildings with a density bonus that can bring them up to 58 feet so long as 10 percent of the units are affordable. Before the pocket neighborhood caught developers’ attention, that wasn’t much of an issue.

But with proposals coming more quickly, some residents fear Frogtown is vulnerable to overdevelopment.

“We support change in development, but we support it where it’s appropriately scaled,” said RAC’s Mulcahy, adding that properties against the river should be treated differently than projects farther inland, though no distinctions are currently made. “Best use is being seen as high-end residential and we can’t think of anything more inappropriate to happen along the river.”

The public hearing earlier this month discussed proposed zoning changes, including dropping the maximum building height to 30 feet from 45 and mandating that new buildings take up no more than half of a lot area.

Mulcahy argues that the rules, even the proposed ones discussed at the hearing, promote more density than Frogtown’s infrastructure can handle.

Consultant Sayles said this is a common concern in the community.

“Frogtown has undersized sewer lines and undersized storm drain lines,” Sayles said. “People feel that when the 5 was built, they were cut off, with one way in at south and one at north, like an island. Frogtown functions like an island.”

Behind the arguments about zoning are residents’ concerns that they will be priced out of the neighborhood.