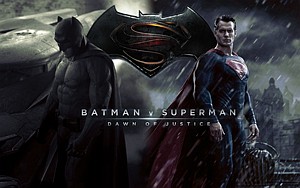 First Up at Bat: Poster for DC’s ‘Batman vs. Superman,’ opening March 25. Photo by Courtesy Photo

Never mind “Batman vs. Superman” – it’s Marvel vs. DC that is shaping up to be Hollywood’s biggest battle.

Walt Disney Co.’s Marvel Entertainment has lately had the superhero blockbuster business to itself, releasing 16 comic-book inspired films since 2010 – the last 12 of which have all opened at No. 1 at the box office.

But now, Marvel’s comic-book rival, DC Entertainment, is muscling its way in: Five months ago, DC moved from New York to the Burbank headquarters of parent Warner Bros., which plans to release 10 DC films in the next five years – more than double the number of DC-based movies released since 2010.

But instead of pinning its hopes on a stable of comic-book good guys, as Marvel has done, DC and Warner are betting on darker, grittier films. They will feature a rogues’ gallery of comic-book baddies, including the upcoming Dirty Dozen-style movie “Suicide Squad,” starring Batman antagonists Harley Quinn and the Joker, among others.

“All this good-versus-evil stuff is kind of played out. It’s time for bad-versus-evil – and DC has the best villains ever,” said David Ayer, director of “Suicide Squad.”

DC has had a slow few years, but it’s hoping to cash in on the continued popularity of comic-book movies, which has shown no sign of slowing.

Marvel’s “The Avengers: Age of Ultron,” released in May, raked in $1.4 billion at the global box office, and its latest superhero film, “Ant-Man,” opened at No. 1 around the world last week despite featuring a titular character much less well known than marquee Marvel superheroes such as Captain America and Iron Man.

With that backdrop, it makes good business sense for Warner to exploit, in numerous movies, the popular comic-book characters it owns the rights to, said studio development chief Drew Crevello.

“From a business perspective, you’re always looking to tell multiple stories from (intellectual property),” said Crevello, senior vice president of production at Warner. “These characters have a massive built-in audience and our plans for them stretch far in advance.”

DC’s assault on the box office will begin with “Batman vs. Superman: Dawn of Justice,” scheduled for release March 25, followed by “Suicide Squad” next August. “Wonder Woman” and “Justice League” will hit theaters in 2017. Slated for 2018 and 2019 are “The Flash,” “Aquaman,” “Shazam” and “Justice League Part 2.” “Cyborg” and “Green Lantern” will bring up the rear in 2020.

That’s a long commitment to DC characters, but one that makes sense given the continued box-office success of not only comic-book movies but franchises generally, said Robin Diedrich, an analyst who follows Warner Bros. parent Time Warner Inc. for brokerage Edward Jones & Co.

“This is a very reasonable strategy because, while the movie business can be fickle, the trend towards franchises and superheroes has been a successful combination that still has legs in our view,” Diedrich said. “We are bullish on Time Warner stock because the company is more centrally focused on content creation than ever before.”

Indeed, the question for Warner Bros. isn’t why it’s releasing so many DC films, but rather why it took so long for the studio to focus on creating content around the comic-book brand’s iconic characters. The studio released just four superhero films in the last five years while Marvel made 16 in that time.

Diedrich puts that down to a combination of timing and resources being focused on other big franchises.

“Warners had a lot of success with franchises like ‘Harry Potter’ and distributing the ‘Hobbit’ and ‘Lord of the Rings’ films,” she said. “But now that those have run their course, it’s time to place their bets somewhere else, and so they’re upping the volume of DC films.”

DC joined the Warner empire in 1989, the year Tim Burton’s first Batman film was released. And though the studio hasn’t released many DC-based films of late, DC Entertainment, and its publishing division DC Comics, has become an important subsidiary, and not just in movies. This fall will see seven live-action TV series based on DC characters, including the much hyped “Supergirl” on CBS.

This closer working partnership was behind the March move of DC, and its 230 employees, from New York – where Marvel remains headquartered – to Burbank.

Now, with the renewed focus on DC films, Warner is hoping for more consistent success than it has had with the handful of comic-book pictures it has released over the past few years: “Jonah Hex” was a massive flop and “Green Lantern” disappointed, while “Man of Steel” provided a healthy profit and “The Dark Knight Rises” was a box-office smash.

Those last two films featured Superman and Batman, respectively, and it is with those iconic characters that this new series of films will be launched, following the grittier tone that audiences responded to well in the recent trilogy of Batman movies.

While box-office earnings will be the ultimate test of how Warner’s new DC strategy is working, those aren’t the only things studios consider when judging the success of franchise films, said Daria Cercek, vice president of production at 20th Century Fox, which has produced a handful of Marvel-based movies, including the X-Men series.

“It’s not purely how much money a project makes, it’s also about emotional equity,” she said, explaining that the term refers to how much audiences are invested in characters, giving studios insight into how they might be able to continue developing a film franchise.

She gave the example of Fox-produced “X-Men: First Class,” which earned less than the previous “X-Men” film but was widely considered more of a creative success and served to pave the way for the X-Men sequels that followed.

“In developing franchise films the emphasis has to be on finding characters the audience want to keep returning to visit,” Cercek said.