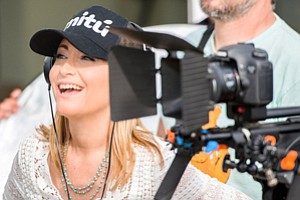 Viral social media campaigns are often the product of weeks and months of meticulous audience research, followed by strategy meetings where content messaging and distribution timetables are haggled over by hordes of marketing executives.

But others, such as a recent #Imnotacriminal hashtag campaign launched by Santa Monica Latino digital media company MiTú, are born on a moment’s notice.

Almost immediately after Donald Trump’s incendiary comments about Mexican immigrants hit the Internet after his June 16 presidential campaign announcement, MiTú’s head of marketing, Ivan Figueroa, sprinted into the office of co-founder and President Beatriz Acevedo with an urgent plea.

Acevedo said that Figueroa told her she needed to get on WhatsApp immediately and contact the company’s biggest stars, many of whom are Mexican, and tell them what’s going on.

A longtime cable television producer, she co-founded the online video network in 2012 with Roy Burstin, its chief executive, and her husband, Doug Greiff, who serves as chief creative officer.

MiTú now boasts a roster of roughly 3,000 Latino influencers who create a variety of lifestyle and entertainment content aimed at millennials. The firm generates revenue from video ads and branded content.

Figueroa’s idea was to encourage MiTú’s creators to respond directly to Trump’s comments, in which he labeled Mexican immigrants as “criminals, drug dealers,” and “rapists,” by posting positive messages to Instagram, Twitter and Facebook using the hashtag “Imnotacriminal,” and encouraging their millions of fans to do the same.

Acevedo loved the idea and grabbed her phone to start reaching out to MiTú’s most popular celebrities. While she sends a regular email newsletter to all of the firm’s creators, she knew a more direct more approach was called for on this occasion.

“We wanted this to happen within minutes,” said Acevedo. “We literally just got punched in the stomach and had a reaction.”

Since then, more than 6,000 people have participated in the campaign, with more than 14 million people viewing the #Imnotacriminal posts across all platforms.

MiTú bypassed YouTube to convey its message, citing the urgency of the moment.

“We launched on Twitter because this platform is still the best for in-the-moment campaigns,” Acevedo said. And Instagram, she added, is the fastest growing social-media platform among Latinos.

According to data released by the Pew Research Center in February, 38 percent of Hispanic Internet users are active on Instagram, compared with 21 percent of whites.

But Acevedo and her colleagues knew that additional content was needed to keep the momentum going, so they did what they do best: produce videos.

One of the company’s producers rushed to USC’s campus and walked around gathering student reaction to Trump’s comments. The 90-second-long video was posted to Facebook within 24 hours and has racked up 4 million views since June 17. A second video, also first posted to Facebook, has earned the same number of hits.

While MiTú’s hashtag campaign might not have been the product of corporate strategy meetings, it can be viewed as a positive marketing tool, said Alysha Light, an L.A. publicist who works with several tech companies.

In a July 2 opinion piece for Digiday, a website that covers the digital marketing industry, Light argued that brands should not be afraid to embrace socially conscious campaigns online, such as the recent #LoveWins movement that kicked off in late June after the Supreme Court legalized same-sex marriage.

Light said in an email that millennial consumers, such as MiTú’s audience, want brands they patronize to facilitate dialogue around the conversations that matter to them, in real time.

“We’re seeing more companies and brands participate in social change in a way that we’ve never seen before, and I would imagine we’re going to see more engaging in similar social causes,” Light wrote, noting that doing so can help increase awareness for the company, which in MiTú’s case, means its creators and their channels.

Ira Kalb, an associate professor of clinical marketing at USC’s Marshall School of Business, agreed that more brands seem willing to take a stand on political issues, but this can backfire, too, as it did for Hapeville, Ga.’s Chick-Fil-A in 2012 when its chief operating officer publicly opposed gay marriage.

“I don’t think it would be very risky for them,” he said. “You really have to look at your audience and see if it’s going to strike the right chord.”

Going forward, expect more political content from MiTú, said Acevedo. Bolstered by the response to the #Imnotacriminal campaign, the company is launching an initiative during Hispanic Heritage Month in September that will carry through election season. MiTú hopes to keep its influencers and audience engaged online in a dialogue about issues that are important to them, such as affordable housing, rising college tuition costs and immigration policy.

“I don’t think millennials know how powerful their voices can be,” said Acevedo. “We really want to spark awareness of these issues because we want them to understand they have a stake in the outcome.”