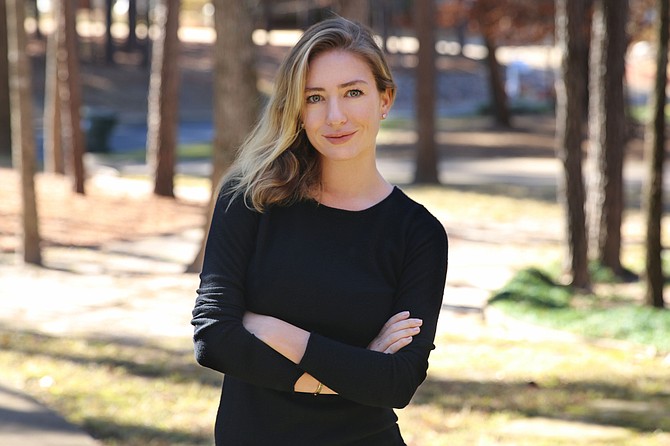 Whitney Wolfe is more than ready to leave the Tinder drama behind.

It’s been seven months since Wolfe filed – and settled – a very public sexual harassment and discrimination suit against the IAC-backed West Hollywood dating app. And in that time, Wolfe moved to the startup scene of Austin, Texas, and released her own dating app called Bumble.

Bumble, a bright yellow Tinder-lookalike that relies on the same “yes or no” swiping mechanism, is pitched as a female-friendly alternative to the oversaturated mobile dating space. It requires women to initiate a chat within 24 hours of being matched or else the suitor, male or female, disappears.

The dating app is the hive product of an eight-person team, including ex-Tinder execs Chris Gulczynski and Sarah Mick, scattered across Austin, London and Los Angeles. Bumble has seen 100,000 downloads despite largely staying under the radar (mostly because Wolfe has retreated into what she calls her hermit habits).

Other stats that are worth noting? Bumble broke 1 million matches this week. Sixty percent of matches turn into female-led conversations. Women spend an average 70 minutes a day on the app. Men, on average, spend 80 minutes.

Wolfe wishes the best for Tinder – she still owns equity in it – but says no one can deny she co-founded the hit dating app valued at an estimated $750 million. And as she moves on with Bumble, there’s no question that this time Wolfe is Queen Bee.

Business Journal: What have you been up to since leaving Tinder?

Wolfe: I took some time to be with friends and family and take a deep breath and regroup. I was thinking, ‘What do I want out of life?’ I turned 25 a couple days after my lawsuit went public. What I was doing day-to-day in marketing and in the products division at Tinder, I was good at it. I loved working with the team, and I loved the startup life. I wanted to do something that had social responsibility. I wanted to create a platform where females could be nice to other females, a platform for kindness but with a really easy aesthetic similar to Instagram or Snapchat. After coming back together with Andrey (Andreev, founder of London-based social network Badoo), somebody I had spoken to and met briefly while at Tinder, he persuaded me to get back in the dating space.

Tell me about Bumble. What makes its female-first approach different from what’s already available in the dating app world?

There’s a few reasons why the girl goes first on Bumble. On platforms like Tinder, you get like 50 matches but nothing happens. They just sit there looming. Or you get an awkward amount of messages that are in some cases unwanted, hurtful, discouraging, maybe just too persuasive, aggressive or just fall flat. If you change the rules, post a barrier on the match or create an ephemeral feeling with time expiring, then you’ll engage with someone better. By making the female talk first, it takes the pressure off the guy, which they love. And the female is encouraged and empowered to make the first move.

I’ve read your past interviews with Marie Claire, Elle Magazine, Harper’s Bazaar. You used to say Tinder empowers women. Do you still feel that way?

It’s very important when you’re talking about a product and the company to separate the two. The things that were written in my lawsuit … were about the culture of a company. Is Tinder (the app) empowering to women? Sure. I think any time a woman is in control of her dating life is great. However, I will say I think it’s tragic and disappointing to see the behavior of a lot of users on Tinder. Tinder has empowered a lot of women, yes. But it has its flaws as every product does.

A big part of Tinder’s success came from its marketing campaign to college fraternities and sororities, a plan that you were a big part of. Are you marketing Bumble differently this time around?

The way I’ve been portrayed in the media is to say I invented college approach marketing. That’s not true. It’s been a proven model that works. We have thousands of students using Bumble over three dozen campuses in the United States. We also are activating in UK colleges, which is exciting. But where I was at 22 when we started Tinder is very different than where I am at 25. I am in the young professional group now so my capacity to understand the needs of the 25-year-old are a little better.

Do you see Bumble being in direct competition with Tinder?

Obviously it’s in the same space, but my intention is not to be the direct competitor to anyone. I wish Tinder all the best in the world. I still hold equity in the company, and I hope it succeeds. The market is different. We’re trying to target someone who likes the fun of Tinder but might want something a little more serious, someone who likes the simplicity of Tinder but wants to make the first move.

Your suit against Tinder helped spark a national conversation about how women are represented and treated in the industry. Can you describe what it’s like for women in tech today?

I cannot speak on behalf of an entire industry because I’m not well educated enough in that department. But I would hope there’s a shift not only in the tech industry, but for women in every area. I just hope that all women never undervalue their merit, their skill or their worth.

Tinder has changed a lot in the six months since you left. Justin Mateen is gone (Ed. Note: Mateen resigned following Wolfe’s suit). And reports say your lawsuit played a big role in IAC’s decision to have Sean Rad step down as CEO. Do you think that’s true?

I can’t speak on behalf of what IAC did or does, but I do believe that even if (the suit) wasn’t the reason for it, I think it’s perhaps a nice excuse. I wish everyone the best, everyone including IAC and Sean and Justin. I want everyone to move on, and I want to move on in a positive light. I want to be able to continue my career.

Do you feel like you were treated fairly by the media, public opinion or the tech community?

You write what you know, and if you’re not informed, then it’s not only the journalist’s fault, but it’s my fault because I didn’t talk. I didn’t want (the suit) to be public ever. That was never my intention. It’s easy for anybody to draw conclusions when you hear sexual harassment or discrimination. But listen. If you look at the facts, I was at the company from Day One. We all played a role in that company, and I’m not here to take credit for Tinder ever succeeding. But I don’t think it would have succeeded if any of those pieces were missing. I was not acknowledged. I was written out of history. And that sets a bad example for other people who experience the same thing.

Why are you comfortable talking about it now?

This is part of my story. You can’t erase six months of your life or two years of your life. The lawsuit took place. We all know it took place. If I’m going to put myself out there and start a new company, I need to own that I was involved in a public lawsuit. I’m not embarrassed by that, and there’s nothing to be ashamed of. The success of this company will fill any void or questions that might be looming. IAC or Sean or anyone, no one can deny I am a co-founder of the company. I understand it has been up for discussion. But I‘m a co-founder of Tinder. End of story.

What are the biggest lessons you’re taking with you into the next stage of your life?

This isn’t just because of Tinder, but never undervalue yourself or let yourself feel undervalued because you have to know your worth. You have to believe in yourself before anyone else can believe in you. Also, you are the five people you surround yourself with. So choose your company wisely.

So tell me, what does your Bumble business card say?

Ah, “Founder” and “CEO” is on my business card.