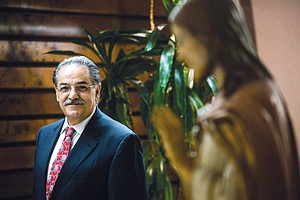 The Daughters of Charity Health System, hemorrhaging $10 million a month and facing bankruptcy, needed a buyer for its six California hospitals.

There was plenty of interest – nearly 30 bidders stepped up. But with a low-income constituency that relies on its safety-net hospitals, including St. Vincent Medical Center in downtown Los Angeles and St. Francis in Lynwood; a complex pension arrangement; and entrenched union interests, closing the deal and stanching the bleeding proved a complex and challenging process.

With so many competing interests, the path Daughters of Charity followed out of the morass was bound to generate controversy.

Indeed, it has. The sale, which has been narrowed to a single bidder, has moved from the boardroom to the streets, as the union representing many of the workers in in the health system has marshaled members and sympathizers to oppose the proposed deal with Prime Healthcare Services.

The union, Service Employees International Union-United Healthcare Workers West, has expressed concern over a federal investigation into Prime’s billing practices and fears that the firm would cut jobs and services at Daughters’ hospitals in favor of profits.

Prime and its allies have rebutted the claims against the company, casting itself as a white knight that’s inspired SEIU’s ire because it won’t bow to the union’s demands.

The battle over the deal comes after a process that began early last year when Daughters of Charity brought in investment bank Houlihan Lokey to help it navigate the complex landscape. The Century City firm guided a process that included reaching out to a mix of 133 for-profit, non-profit, government, Catholic, private equity and real estate sources.

In March, Daughters of Charity received 29 bids: some for its medical buildings, others for just some of its hospitals, some for the system as a whole. Roughly half of the bidders returned for the second round in May, and six were left for the final round in September.

“If someone provided a proposal that didn’t achieve our objective or wasn’t competitive, we told people this is what you need to do to your proposal going forward,” explained Houlihan Lokey Managing Director Andrew Turnbull, who led the transaction. “If they didn’t, they self-selected out.”

In early October, the health system’s board evaluated the bids based on about a dozen criteria, among them the prospect for continuation of health care services, valuations, the likelihood of the transaction closing, union agreements, pension experience and financial wherewithal.

Of the remaining half-dozen suitors, Paladin Healthcare and Integrity Healthcare Inc. couldn’t secure funding and essentially dropped out of the race, according to Robert Issai, the health system’s chief executive.

“We had very high hopes (for Prospect) because they’re owned by Leonard Green, and Leonard Green has more money than God, I guess,” Issai said.

But two days before Daughters of Charity needed to review the bids in early October, both Prospect and SGM still hadn’t pinned down their funding sources, according to Issai.

“Prospect’s owner has a lot of money but they never told us, you know, Morgan Stanley is going to give us a letter of credit for $500 million or whatever to do this transaction,” he said.

After a nearly yearlong process, Daughters of Charity finally struck a deal with Prime.

While Issai and Turnbull said Prime was clearly the class of the competition for the chain, not everyone sees the company as Daughters of Charity’s savior.

The union is adamantly opposed to Prime, which critics contend prizes profits above all else. Other opponents, including the United Nurses Association of California and Lynwood municipal officials, have voiced concerns about the 7,600 jobs and more than 16,000 pensions at stake.

But others, such as the California Nurses Association, have showed their support for Prime as a lifeline.

Blue Wolf, which invests in distressed companies and deals involving organized labor relationships, was championed loudly by the union and Dave Regan, the union’s president. Regan said Blue Wolf was offering $300 million in capital improvements – twice as much as Prime – not to mention collective-bargaining understandings with two of the major unions at Daughters of Charity’s hospitals.

But Blue Wolf was essentially proposing to enter into a management agreement with the hospital system for $24 million a year with an option to acquire the assets later, according to Issai and board documents.

Board meeting minutes note that Blue Wolf wouldn’t provide further details about its turnaround plan and because the firm wasn’t proposing a purchase of the health system, “it wasn’t really an offer.”

Turnbull disputed this, noting that he wanted to keep the process full of competitive bids for as long as possible.

“I don’t believe we misrepresented Blue Wolf,” he said. “We clearly understand the bid. It was then, and is now, inferior to the proposal Prime put on the table.”

Turnbull said it isn’t lost on him that Prime has some relationship issues that create some challenges, but he stands by the decision.

“We chose the right proposal, notwithstanding the political challenges it brings,” he said.

In the end, Prime’s offer seemingly ticked each box of the board’s criteria, offering a deal valued at $843 million in cash and assumed liabilities. Prime has agreed not to cut charitable care at the hospitals for a period of five years, as did other bidders. The deal must still be approved by state Attorney General Kamala Harris – and the Vatican – and Prime still faces stiff resistance from the union.

Lowell Brown, national chair of the health care practice at Arent Fox in Los Angeles, reviewed Houlihan Lokey’s summary of bids and the board’s subsequent discussion for the Business Journal.

“It looks like (the board) went through a painstaking and thoughtful evaluation of the various proposals, and they made sure the organization’s mission was a key part of the discussion,” Brown said. “It did seem that Houlihan Lokey went through pretty objectively (outlining) the pros and cons of every proposal. It was clear to me why they ended up going with Prime.”