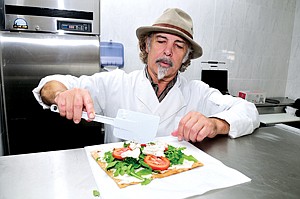 Spreading Out: Youssef Fakhouri at his vegan shop Vromage in West Hollywood. Photo by Thomas Wasper

Youssef Fakhouri is less a cheese maker than an evangelist, trying to convert vegetarians into vegans by serving them cheese made from nuts instead of dairy.

The owner of Vromage, a high-end vegan cheese shop in West Hollywood, relishes presenting his creations to friends who don’t know it lacks milk, then laughing while they praise it.

“My goal was to get the experts to like it,” said Fakhouri, who considers himself “almost vegan” because he eats the occasional Italian pastry and puts cream in his coffee. “My target clientele was Europeans who know cheese, not someone from the Valley who is used to this veganism, hippie kind of cheese.”

In place of dairy and soy, Fakhouri’s cheese is made from the milk of pine nuts and cashews as well as pumpkin and sunflower seeds. He ferments the nut milks and dries the herb-infused cheese into logs or loaves. On a typical day, he said, he offers 10 varieties priced between $2.40 and $3.25 an ounce – and sells out of it all.

Fakhouri, who was raised in Paris and Morocco, leased his small retail and kitchen space on Sunset Boulevard in December 2013, financed in part by his side business dealing antiques. He spent most of last year perfecting his recipes and posting pictures of his creations on Facebook.

Vromage – as in vegan fromage – opened in September and has quickly built a cult following, Fakhouri said. Four months after opening, the small shop was swamped with holiday orders and visits from his many regulars. He hired one seasonal worker, but remains the only cheese maker. Despite the time crunch, he insists that every customer sample every variety of cheese, offering them hearty slices.

Because the ingredients are expensive and the samples free, Fakhouri, 60, doesn’t expect to turn a profit soon, despite his store’s quick popularity. He has, however, seen investor interest, he said.

“At this age, you think about what you have to contribute while you are alive in the world,” Fakhouri said. “When you don’t think about making money, that energy attracts people and you end up making money.”