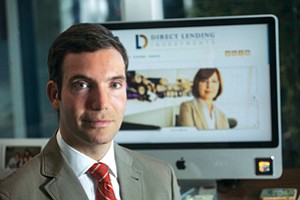 Peer-to-peer lending isn’t as “alternative” as it used to be, and that’s been a boon to funds such as Direct Lending Investments, which specializes in buying high-interest, short-term small-business loans.

The downtown L.A. hedge fund last week made a three-year, $250 million commitment to provide capital for loans made through lending site Biz2Credit. The deal is Direct Lending’s largest commitment to date, and the latest sign of the firm’s growth.

Since launching in 2012, Direct Lending has grown to manage 2,000 loans, and it now has assets under management of $115 million – up from just $14 million a year ago. As new money comes in and loans turn over and self-liquidate, the firm is picking up loans at a rate of $25 million to $30 million a month.

President Brendan Ross declined to disclose Direct Lending’s return rate, but said a fund with a similar portfolio in the same asset class would generate annual returns of around 11 percent to 13 percent.

Ross, whose firm has previously funded loans through Biz2Credit, said the new deal creates a more direct line for his company – and his investors – to access top-quality loans. Biz2Credit’s track record of $1.2 billion in small-business funding and its default rate of 0.7 percent also made the partnership an obvious play.

Loan sizes will range from $25,000 to $500,000 for terms of six to 24 months. More than $60 million of Direct Lending’s capital has already been distributed across 700 to 800 loans, according to Biz2Credit President Ramit Arora.

Peer-to-peer lending has now become standard practice for investors looking to diversify their business portfolios, even though returns have fallen over the past few years.

But the once revolutionary online financial service is still a relatively safe bet that offers solid returns, Ross said.

Lending platforms such as Prosper Marketplace Inc. and Lending Club Corp., which priced its initial public offering last month at $15 a share and raised $870 million, hit their stride during the economic downturn of the late 2000s when banks were forced to tighten credit terms. Borrowers, specifically small-business owners, turned to lending sites for short-term loans despite staggering interest rates that could be upwards of 40 percent.

What made peer-to-peer lending attractive for borrowers, though, was the offer of quick cash. Biz2Credit’s Arora said his company could process loans of up to $100,000 in just 48 hours, shaving off the days or weeks needed to wait for a bank loan approval.

And for investors, such as retired venture capitalist Brett Byers, such loans offer higher returns at lower risks than bonds and stocks.

“I was in early to get higher returns,” he said. “But the returns have come down as peer-to-peer lending moves into the mainstream.”

Banks are starting to loosen their credit policies, and a growing number of peer-to-peer loan providers are competing to buy a limited supply of loans. Lending sites have been forced to drop their interest rates – meaning lower returns for investors – as they try to attract more borrowers. Byers said his average annual return rates have fallen from 20 percent in 2009 to around 12 percent today.

But those double-digit returns are still pretty attractive for investors given the high price of stocks and the low yield of bonds.

David Reyes, founder of San Diego wealth management firm Reyes Financial Architecture, said he wouldn’t be alarmed if 30 percent of a client’s portfolio was dedicated to peer-to-peer loans, as those are not subject to the same interest rate or inflation risk that comes with bonds.

“People are scared of both the stock market and the bond market,” he said. “It fills the void where I feel we can help to protect and diversify the portfolio, have yield and find an option that’s not correlative to the stock market.”

“We didn’t even use the phrase ‘private credit’ 10 years ago,” he said. “It’s really peer-to-peer lending that’s putting it on the map.”