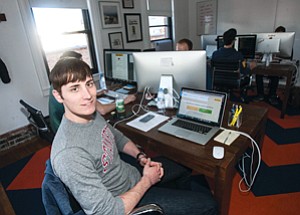 A few years ago, Jonathan Eppers decided it was time to move out of his West Hollywood apartment.

Like others in the same situation, he found the process difficult and time-consuming.

“I was like a lot of renters who want to move and then get so frustrated,” the former senior product manager at Santa Monica’s eHarmony recalled of his apartment-hunting experience.

So Eppers set out to change things by launching RadPad Inc. in January 2013. RadPad’s mobile app allows prospective renters to browse apartment listings, with at least three photos of each unit.

After participating in Venice’s Amplify.LA startup accelerator, RadPad raised $4 million in seed funding from firms such as SG VC in Santa Barbara, Social Leverage in Phoenix as well as individual investor Michael Huffington.

Eppers said his Santa Monica company is in the process of securing a larger Series A round.

RadPad operates a website, too, but more than 80 percent of users access its listings on mobile devices, according to Eppers, who’s also RadPad’s chief executive. Nationwide, about 600,000 listings are posted on the site.

As of Feb. 2, RadPad had slightly more than 4,000 active listings in greater Los Angeles, compared with just under 4,000 for subscription service WestsideRentals.com, according to numbers Eppers said RadPad culled from both companies’ mobile apps and presented to prospective investors.

“We’re over 4,000,” Miller said. “All of our listings are real and we get permission from all of our owners to list.”

In addition to gathering listings from close to 60 online sources, RadPad also receives listing information from many landlords directly. It then cross-references information about units listed on multiple sites to ensure accuracy.

RadPad’s service also allows tenants to pay their rent through the app by either debit or credit card, a feature it launched in September.

The company allows landlords and brokers to list their units at no charge. It generates its revenue through a 1 percent fee charged to renters when they pay by credit card. It used to charge a fee for debit card payments, but discontinued the practice in January.

Eppers explained that some renters prefer to pay by credit card because automatic payments are easier and credit card use can generate points. Beyond that, some renters, especially younger ones, don’t even have a checking account.

Eppers said RadPad is on pace to process $14 million in rental payments from customers in 44 different states in its first year offering the service, with the average payment totaling $1,600. That means RadPad is on track to generate as much as $140,000 in revenue from rental fees.

At that rate the company is operating at a deficit, but there is plenty of room to grow. Zillow, a Seattle real estate data and brokerage app, said more than $440 billion was spent on rental payments last year.

Eppers’ goal is eventually to increase revenue by charging landlords and brokers for what he called “prequalified leads,” which are profiles of prospective renters using information gathered by the app. That’s a prime reason RadPad doesn’t charge a fee for payments made with debit cards.

Using that data, he said, a landlord can get more information on who the renter is early on in the process.

Eppers said his biggest hurdle after launching the company was convincing landlords and brokers to list their available units on the unknown app.

And since brokers get paid on commission, it became obvious to Eppers that he needed to do a better job of explaining that RadPad wasn’t trying to take away their cut.

“What often happens for these guys is they don’t know if a service like RadPad is trying to take over their business,” he said.

So he pitched RadPad as a virtual marketplace where prospective tenants connect with a landlord or listing agent directly via contact information contained within a listing.

Over the past year, RadPad has hired community managers in Los Angeles, Chicago, Washington, San Francisco and San Diego, and there are plans to hire two more in other major cities very soon.

Charged with being brand ambassadors and building relationships with landlords and brokers in their markets, the community managers also operate a small team of freelancers who go around placing RadPad signs in front of buildings where units are listed.

His role is to be the primary liaison between RadPad and listers.

“We want to expand our presence and be much more proactive in how we present ourselves to them,” Eppers said. “Our big focus is on investing heavily on the demand side of our business so it becomes a very important marketplace for the listers.”

Brent Sprenkle, a landlord who owns a handful of small apartment buildings in Hollywood and Koreatown, said the service has helped him get tenants into vacant units quickly.

“It’s been a fantastic tool for driving traffic,” said Sprenkle, who’s also a partner at Berkadia Real Estate Advisors in El Segundo. “They market the units, and we get really great exposure.”

Wendy Wilkins, an agent at Keller Williams Realty Inc. who primarily works in the Hollywood Hills area, said she’s used RadPad on several occasions when people she’s sold condos to have asked her to help them rent the property.

“They were really good for me,” Wilkins said about RadPad. “I would say my contacts have doubled since RadPad has come into play.”