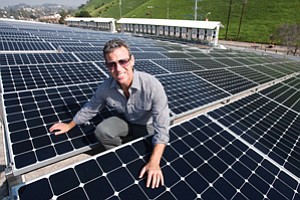 For more than a decade, Santa Monica’s PermaCity has been a small player in the smallest corner of Southern California’s solar industry, installing solar panels atop commercial and industrial buildings.

But as that part of the local solar market shows signs of life, PermaCity is stepping into the spotlight, winning two big contracts over the past year and becoming a significant player in L.A.’s rooftop solar industry.

Through a deal set to be announced last week, the company will install solar panels on top of as many as 30 buildings in Los Angeles, enough to generate 22 megawatts of electricity, as part of a contract issued by the Los Angeles Department of Water & Power. It’s one of the biggest deals ever for rooftop solar development in the city.

That deal follows one PermaCity reached in the summer to install solar panels on the roof of clothing retailer Forever 21’s headquarters in Lincoln Heights. Activated late last month, the 15,500 panels can generate 5 megawatts of electricity – enough to power nearly 1,450 single-family homes and to make it the largest single commercial rooftop solar installation to date in Los Angeles.

PermaCity posted revenue last year of between $20 million and $30 million; over the 18 months of the new contract, Jonathan Port, PermaCity’s founder and chief executive, said he expects revenue to grow by about 40 percent.

“This is a huge deal for any company and is definitely a game-changer, both for us and for Los Angeles,” he said.

Residential solar rooftop projects have taken off over the last few years, making household names out of residential specialists Verengo Solar in Torrance and SolarCity in San Mateo. But solar development on top of commercial and industrial properties has lagged behind, although SolarCity recently installed a big array on the MillerCoors brewery in Irwindale. (See story, page 8.)

A handful of obstacles have kept commercial building owners from joining the solar rush, most notably aging roofs that need to be replaced, said PermaCity’s Port. In the years after the recession, building owners held off on paying for new roofs and other maintenance projects, and it doesn’t make sense for them to install solar arrays on roofs that will need to be replaced in just a few years.

Financing is also problematic, as government incentives for commercial rooftop projects have been sparse and shrinking, despite generous incentives for residential projects. The smaller incentives make it more difficult for building owners to defray the tens or hundreds of thousands of dollars in upfront costs.

But commercial building owners who have been able to get financing have seen solar panels pay off. Chatsworth natural foods maker Earth Island, said that after PermaCity installed solar panels at its building in 2002, the company started making money from selling extra power to the DWP. The roof has 756 panels generating roughly 85 kilowatts of electricity.

“When Jonathan Port first approached me about installing solar, I was a bit dubious,” said Earth Island Chief Executive Robert Goldberg. “But we’ve been cash-flow positive since day one and the system has had no major problems.”

Small-scale projects such as Earth Island became the bread and butter for PermaCity and for the commercial solar rooftop industry as a whole. PermaCity has also installed modest-sized solar arrays on American Apparel Inc.’s downtown L.A. headquarters and an El Monte loan-servicing center for Chinatown’s Cathay Bank.

But scaling up to large projects ran up against some technological obstacles: Putting thousands of solar panels on a big-box store or a warehouse typically means lots of added weight and lots of holes drilled into the roof for the brackets that hold panels in place. (Drilled holes, even when sealed, can eventually cause leaks.)

In the last couple of years, though, equipment has become much lighter. And PermaCity has developed a system that doesn’t involve drilling holes in the roof; instead, the systems are welded on. The company used that system for the first time on a large scale on its Forever 21 project.

Many installers, both of residential and commercial projects, own the panels and sell power back to their customers at a much cheaper rate than the local utility. But PermaCity said the power generated by the panels belongs to Forever 21.

That deal likely helped PermaCity snag the new 22 megawatt deal. On that project, PermaCity is technically a subcontractor; the DWP’s contract is with SunEdison Inc. of St. Peters, Mo., which will be building an 88 megawatt solar plant in Kern County to supply power to the municipal agency.

Under the terms of that contract, SunEdison must provide 22 megawatts of rooftop solar power generated within DWP’s service territory. SunEdison put that subcontract out to bid and PermaCity came out the winner.

SunEdison will pay PermaCity to find buildings – between 15 and 30 of them – for new rooftop arrays. Building owners will ultimately pay PermaCity for the installations themselves, with financing from SunEdison partner TerraForm Power Inc. of Bethesda, Md. Port said some of the money from SunEdison – he wouldn’t say how much or disclose other terms of the contract – will go to help ramp up production of the parts PermaCity uses to install solar arrays.

“This is the first high-volume contract we’ve ever had,” Port said. “Besides jump-starting the local commercial market, this contract is moving us toward our goal of becoming the largest commercial rooftop solar developer and installer in California and all of the Southwest.”