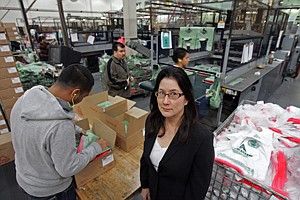 Checking In: Cathy Browne at Huntingon Park’s Crown Poly in a 2011 photo. Photo by Ringo Chiu.

Upset with the state Legislature’s passage last year of a ban on plastic bag use in grocery stores, the plastic bag industry is mounting a most unusual attack on the law, with not one, but two initiatives aiming for November’s ballot.

Late last year, the American Progressive Bag Alliance – a group formed a decade ago to fight the spread of plastic bag bans – qualified a referendum on the state ban.

Industries that stand to be negatively impacted by a just-passed law often place that law on the ballot with the intention of persuading the voters to reject it, though the track record on such referenda is mixed.

But here’s the twist: Earlier this month, the alliance received clearance from the Secretary of State’s Office to begin collecting signatures on a second ballot measure. This one says that, under last year’s plastic bag ban, the fees grocery shoppers pay for paper and reusable bags must be turned over to the state to be directed to specific environmental programs.

“We are against the bag ban, but if there is to be a bag ban, the money should go toward solving the environmental problems the entire measure was crafted to address,” Browne said. “Why should the money go to profit the grocers? It’s one of the reasons why we opposed the original bag ban in Sacramento.”

But is this new measure an attempt to peel off grocery industry support for the plastic bag ban by depriving store owners of this sudden cash boost?

The answer is no, according to Lee Califf, executive director with the APBA.

“We want to make sure voters … know exactly where their money is going and be able to weigh in at the ballot box next November,” Califf said.

Employers in Los Angeles County and California will face a raft of new laws taking effect Jan. 1, and while smaller in number than recent years, they will have a broad impact. Among the most noteworthy:

In highly congested sections of Los Angeles, finding a parking space isn’t just a challenge for commuters and shoppers. It can also be a major headache for delivery truck drivers, who often have to park in the middle of roads or park illegally.

Los Angeles City Councilman Mike Bonin wants to change this. Earlier this month, he authored a motion ordering the city’s Transportation Department to report back on the top 20 street segments with the largest number of parking citations issued to delivery and fleet vehicles. The department must also look at expanding commercial loading zones.