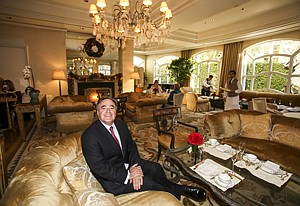 VIP Treatment: Offer Nissenbaum at the Peninsula Beverly Hills, where deep-pocketed guests can ask for anything – within reason. Photo by Ringo Chiu.

Rooms at the Peninsula Beverly Hills cost up to $9,500, but the personal service bestowed by Managing Director Offer Nissenbaum is priceless.

Part of his mission is to beat other luxury hotels to wealthy VIP guests and he goes about it with a personal touch and individualized service from monogrammed pillows to imported yogurt, believing small details such as those are essential to keeping big names coming back.

“When guests walk into the hotel and see their initials monogrammed on the pillow, it sends the message, ‘Hey, we really thought about you,’ ” said Nissenbaum.

Those multi-starred accommodations are all outfitted with similar deluxe amenities such as spas and dog walkers. So Nissenbaum looks to provide unique experiences to create emotional connections with clients.

“We like to differentiate ourselves from the competition and provide services no one else does,” he said. “Our goal is to make every guest feel very special.”

That starts on arrival at the hotel. As soon as guests step out of their cars, employees greet them by name as bellhops in white and gold uniforms collect the luggage. Staffers memorize the faces of new guests from pictures circulated in advance so they can say, “Oh, Mr. Smith, nice to see you.” Nissenbaum dashes to and from his office to personally greet as many guests as he can and likes to build communication and trust with the clients.

Guest requests in a typical week include unusual things such as supplying 48 birds for a photo shoot, buying 20 iPhones for a guest and family, flying a concierge to London to retrieve a guest’s dog or switching rooms so a guest can view a favorite tree.

Although Nissenbaum has faced every imaginable guest question in his eight years running the Peninsula, there’s one he never has to deal with … “Don’t you know who I am?”

He explained, “They don’t need to say that. Because we already do.”

At his hotel, guests can choose to check in and out whenever they choose – a service that is still rare at hotels around the world.

The personalized service includes many guests arriving to find rooms already outfitted with their favorite drinks, foods and newspapers.

After 30 years in the luxury hotel business, Israel-born Nissenbaum, 58, knows the trade well and especially understands the importance of discretion when it comes to A-list guests.

“I don’t even tell my own wife who stays here,” he said.

But paparazzi have recently spotted tabloid fodder such as Kim Kardashian, Reese Witherspoon, Anne Hathaway and Selena Gomez strolling into the marbled lobby that is decorated with opulent flower bouquets.

“Celebrities may have specific needs that may require more confidentiality, to protect them a little bit more,” he said. “But at the end of the day, they’re human beings.”

Understanding the 400 human beings who work at the Peninsula is so important to the managing director that last year he worked as a bellhop there to see what it was like to personally bring items and run errands for guests. It was part of a program he has introduced called Walk in My Shoes, which gives senior executives insight into life on the front lines by having them spend a half-day doing other jobs such as front desk clerks, doormen and the like.

Married with three children, he also sees the Peninsula staff as a family, eating with them in the employee cafeteria, the Orchid Room, and holding monthly meetings with representatives from each department of the hotel aimed at fostering team spirit and fresh service ideas.

He has been fascinated with the hotel business since childhood visits to the Plaza Hotel New York, where an uncle of his worked. Nissenbaum worked through high school in part-time jobs as a bellhop and doorman.

After earning a degree in hotel management, one of his first jobs was as a clerk for flamboyant hotelier Leona Helmsley, who was nicknamed the “Queen of Mean” for her tyrannical behavior. But Nissenbaum took an approach of inclusion rather than intimidation to later management positions at hotels in Miami and New York, and has employed the same calm and friendly approach at the Peninsula, a 195-room complex that opened in 1991 and offers standard rooms that start at about $550 a night.

With Hollywood awards season almost upon us, the hotel is preparing for an influx of guests attending the Golden Globe and Oscars as well as other star-studded ceremonies and every eventuality has been prepared for.

“Buttons on dresses are going to pop and zippers are going to be malfunctioning,” said Nissenbaum. “Anything can happen.” That is why he keeps three seamstresses at the ready.

Hairstylists and makeup artists are a phone call away for last-minute primping.

He recalls a time a guest heading to the Academy Awards lost his ticket two hours before the show. As the unlucky man searched his pockets in a panic, muttering, “I had it, I had it. …,” his manager and agent scoured the room. Eventually, a housekeeper pulled the ticket from behind a sofa.

“I’ll never forget it,” Nissenbaum said, shaking his head. “I was sweating.”

Each morning begins with a walk through the hotel, he said, speaking in his office with a view of Lamborghinis and Porsches pulling into the driveway.

His greatest pleasure in the job continues to come from stopping and talking to people during such walks.

“I find people very interesting. I always have. I enjoy talking about anything and everything in life, Nissenbaum said. “ It’s very rewarding to know people from all over the world and being comfortable around people is very important in this business.”