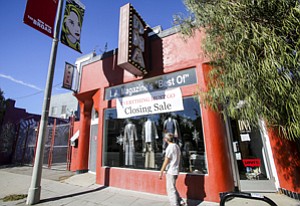 Folding Up: DNA Clothing on Rose Avenue in Venice, where owners say rents have tripled. Photo by Ringo Chiu.

The age of $2 tacos could soon be over on Rose Avenue – a street that symbolizes Venice’s transformation from bohemian beach town to sophisticated Silicon Beach hub.

La Fiesta Brava has been handed an eviction notice after 23 years serving affordable Mexican fare, and the restaurant slated to take over that space is more likely to serve salt-roasted branzino and grilled oysters.

A few doors away, 23-year-old DNA Clothing is closing after its rent tripled. A yoga studio reportedly is scouting out the space.

The forced march of Rose’s old-timers is a sign that the street is abandoning its past as a sleepy, rough-hewn road you’d pass through to get from Lincoln Boulevard to the beach. Now, an influx of hip restaurants is attracting new tenants as the rest of Venice gets overcrowded with shopping and dining.

While the seaside neighborhood’s turn to the trendy and refined has been years in the making, the recent spillover to Rose from popular shopping drags Abbot Kinney Boulevard and Main Street signals a quicker, bigger metamorphosis taking hold. Tech companies are snatching up property and the neighborhood is filling with young and affluent employees.

There’s just one problem: There’s little room to grow on narrow streets already packed with homes and businesses. That won’t change even as tech companies such as Google Inc. and Yahoo Inc. add digs in Playa Vista, about three miles away. Venice will still remain a kind of local home base for them, said real estate broker Nico Vilgiate, executive vice president for Colliers International in Los Angeles.

“Rose Avenue is Silicon Beach in a nutshell,” said Vilgiate. “It’s not just an office environment. It’s where those employees work, live and play.”

A decade ago, investors had little appetite for Rose, a street remembered as kitschy at best and dumpy at worst. Homeless people lived on the cracked sidewalks and in permanently parked RVs. A couple of mom-and-pop markets sold chips and liquor. An industrial facility for the Pioneer Bakery dominated a full block. After the bakery closed in 2006, its weedy lot stood empty for years.

The business landscape started shifting in 2011 when Google moved into the iconic Binoculars Building on Main around the corner from Rose. The next year saw a flurry of activity with a mixed-use apartment complex opening on the old bakery lot, pulling in a vegan restaurant, yoga studio and hair salon. Across the street, Superba Snack Bar from the creator of the Pitfire Pizza chain opened to rave reviews next to an already buzzing wine bar.

The current monthly rent for retailers on Rose is about $6.50 a square foot, said Jason Charms, an associate at Jones Lang LaSalle in West Los Angeles. That’s about twice as high as several years ago, before Google moved into Venice and new businesses popped up on Rose. And a newly constructed building on Rose is aiming for an even higher rate of $10 a square foot, according to brokers. Even though typical rates are much lower than Abbot Kinney’s square-foot rates of $15 to $20, they are still costly for small businesses, especially those that have been there for years.

Some businesses have not weathered the rent transition. Clothing shop ME & Blue closed in the spring after a seven-year run. Home goods boutique Golden State relocated to Lincoln earlier this year after five years on Rose. The shops’ owners could not be reached for comment but neighboring proprietors said rising rents forced them out. Other shops quickly took their places.

Residents now worry that the new bistros will attract drunken revelers and make parking a nightmare. They fear that big corporations could uproot indie businesses. And longtime residents don’t want to see the neighborhood’s familiar funkiness get too polished and pricey.

George Francisco, co-chair of the Venice Neighborhood Council’s Business Committee, said he prefers not to make a judgment call on Rose’s upgrade.

“Is it a good thing? Is it a bad thing?” he asked, rhetorically. “Businesses … succeed or fail based on who they’re serving and if they’re fulfilling a need.”

Just who the businesses along Rose would serve is in flux. The new apartment complex leases one-bedroom units starting at $3,750 a month, just around the corner from government-subsidized Section 8 apartment buildings. A homeless encampment appears to have found a permanent home alongside a storage facility on the street.

Low-cost dining options are disappearing. At the imperiled La Fiesta Brava, a chicken burrito goes for only $6.50 and an enchilada plate is less than $8. The storefront eatery, decorated with toreador bric-a-brac, is fighting the eviction notice it received in October, supported by locals who have watched Rose fill up with pricey dining.

“A lot of people who live around here can’t afford to go to these places,” said Jasmin Camarena, who staffs the eatery with her mother and four siblings. “They felt that they had no need for another big restaurant that they probably wouldn’t be able to afford.”

Aiming to replace La Fiesta Brava – along with the neighboring Ranch Market, which recently closed – with an as-yet unnamed restaurant is Bruce Horwitz, owner of Abbot Kinney hot spots the Tasting Kitchen and Wabi Sabi. He said he understands the concern among locals about a newcomer booting out a neighborhood staple.

“There’s just a lot of feelings by the neighborhood of the sadness when an old place goes by the wayside,” he said.

But he thinks it is a good thing to keep new businesses in the hands of Venice residents such as himself rather than turning them over to corporate brands.

Margaret Dietl Schniderman, co-owner of clothing boutique DNA, is not putting up a fight to save her shop. When the rent tripled, she and co-owner Alan Schniderman, her husband, decided to pull out of the business altogether. The store will shutter by the end of this year.

“At a triple rent, what we’re doing is unsustainable,” said Dietl Schniderman. “We’re not vertically integrated; we’re not manufacturers.”

When DNA opened on Rose in 1996, Dietl Schniderman said the store was robbed twice and she recalls walking over people sleeping on the streets to get to work. Now she is pleased to see businesses making the street nicer, but thinks the high rents could trample shops that run on thin margins, like her own.

“The independents aren’t going to be able to survive. No way,” she said. “Venice, it’s going corporate.”