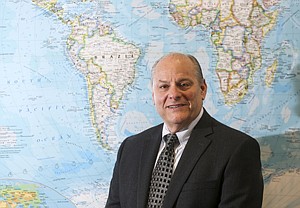 There’s big money to be made as an expert witness, especially in high-profile entertainment disputes.

Beverly Hills attorney Richard Marks, for example, once received nearly $140,000 for just one testimony, according to court records. And because qualified expert witnesses can be hard to find, Marks expects he’ll have plenty more opportunities to testify.

Indeed, he might be called to take the stand again soon in a case between two advisers who worked on reality show “Survivor,” where one claims the other bilked him out of his $14 million share of the CBS show’s revenue. That case, which was postponed hours before it was scheduled to begin trial in Los Angeles Superior Court last week, is among several expert witness jobs Marks has picked up in recent years.

Marks is in high demand as an expert witness, but he said he doesn’t have time for more than two or three cases a year so as not to disrupt work at his transactional practice at Beverly Hills boutique firm Point Media.

“My expert witnessing obviously varies month to month and year to year, but it’s probably at most 5 to 10 percent of my practice,” he said. “I have to kind of fit it in.”

But when he and other hired witnesses take the stand, their industry insight can play a huge role in the outcomes of cases.

In 2010, for example, Marks testified before a jury in an L.A. federal court about the standard customs adopted by the entertainment industry’s dealmakers. The jury in that case had to decide whether the creator of “Who Wants to Be a Millionaire” was entitled to half of the hit game show’s profits.

What Marks earned from his testimony in that case was not publicly disclosed. However, the award gave $270 million to the TV show’s creator, Celador International. Since Marks spent so much time on that high-states case and the award relied heavily upon his insight, Marks likely got a nice payday. And additional expert witness job offers.

The ideal expert witness is someone who has years of experience negotiating deals in the entertainment industry and is up to date on current practices, said James Sammataro, an entertainment litigator in the L.A. and Miami offices of Stroock & Stroock & Laven.

Historically, litigators would commonly turn to retired entertainment executives or attorneys when they needed to provide a jury or arbitrator with industry-specific insight, Sammataro said. But now, as new media – such as Netflix and Hulu – has drastically altered the nature of many entertainment deals, he said it’s increasingly challenging to find a qualified expert witness.

“Because of the consistently evolving nature of the media, you need someone in the game to be able to speak,” he said. “What may have been an acceptable business model in 2013 may not be acceptable in 2015.”

At the same time, he added, there can be substantial money to be made as an expert witness. Depending on one’s experience, Sammataro said an expert witness’ hourly rate usually starts at $450 but can go all the way up to $1,200.

Before Marks launched his private practice about a decade ago, he had served as a legal affairs executive at Paramount Pictures Corp., Walt Disney Pictures and Universal Television.

His resume – which boasts years of experience in production, development and distribution deals for both feature films and TV shows – makes him a prime candidate to provide industry insight as an expert witness.

But at first, he said, it wasn’t something he even considered.

Marks, and many other practicing entertainment lawyers, tend to be reluctant when asked to testify as an expert witness, he said. That’s largely because there’s a risk of alienating a certain area of the industry, such as major studios, and tarnishing their reputation.

But after he had been approached several times, Marks said he finally caved when he realized there was a significant void.

“The other experts available were professional experts and they might take cases they didn’t necessarily believe in,” he said. “So my firm decided that when we really believe in something, and we felt it was the right thing to do in terms of our industry, we would open ourselves up to being experts.”

Regardless of whether someone is an attorney, entertainment executive or even a professional expert witness, the biggest challenge litigators face is finding someone with the specific expertise to address the issues at hand who can also withstand intense questioning from opponents, said David Ginsburg, who founded the entertainment, media and intellectual property law program at UCLA School of Law.

Expert witnesses are subject to questions from both sides of a dispute, Ginsburg said, and it’s a common strategy for opposing attorneys to try to disqualify someone by making it seem like they were paid to say something specifically to help their client.

“When the other side approaches an expert, they almost always ask, How much were you paid for your opinion?” Ginsburg said. “The answer is: I was paid nothing for my opinion. I was paid for my time.”

Sammataro, the litigator from Stroock, said that question is usually the first one an expert is asked, mostly because the other side wants to portray that expert as a hired gun.

Even so, both sides of a dispute hire expert witnesses to provide an outside perspective that’s useful for a judge or jury, especially when it comes to complex topics.

And because qualified experts are both hard to find and, oftentimes, significant players capable of influencing the outcome of a dispute, such as Marks’ “Who Wants to Be a Millionaire” case, Sammataro said they command big bucks.

“Most experts aren’t cheap,” he said. “But, ultimately, what you’re purchasing is credibility.”

For example, Sammataro worked on a case that settled in 2011 and included more than $283,000 in fees paid to three expert witnesses, according to court documents. One of the experts included Marks, who received nearly $140,000 at a rate of $600 an hour.

While that might seem high – especially because the case settled before the trial started – Sammataro said the experts’ testimonies helped lead to a $7.5 million settlement.

“It was a drop in the bucket, really,” he said.

The actual hourly rate experts charge, however, are not typically disclosed publicly. But that particular case was litigated in bankruptcy court and the fees required approval from creditors, meaning specific figures appeared in court documents.

But Marks said he is more motivated by the fact he’s helping resolve disputes than he is by the extra paycheck.

“When people call to engage me as an expert witness, I always say, I hope you settle it,” Marks said. “It may be more lucrative for me to spend more hours if it goes to trial, but it’s also a disruption to my normal practice.”