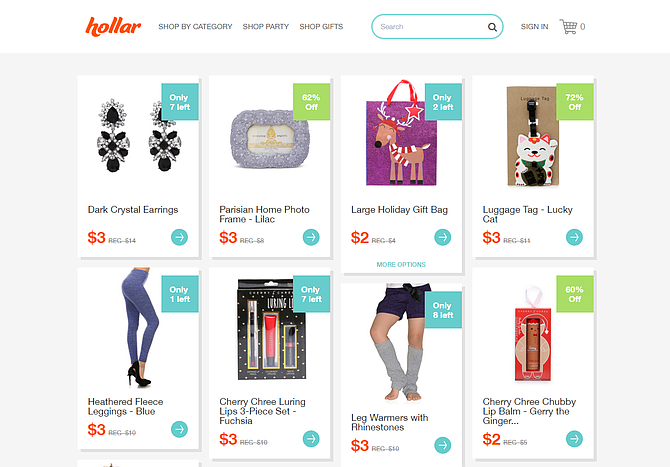 Online discount store Hollar of Santa Monica has closed a $12 million Series A round just four months after raising a $5.5 million seed round.

Hollar aims to put the dollar store experience online, though most of its items actually cost $2. The retailer sells consumer goods such as makeup, coffee cups, decorations and cheap jewelry. The company is trying to set itself apart from brick-and-mortar stores by operating solely online, cultivating a strong brand and selling trendier items.

“We are really trying to chase after the extreme-value segment,” said co-founder and Chief Executive David Yeom, noting that the company is targeting female millennial and generation-X shoppers. “We know that moms are going to be incredible targets for us.”

Yeom also believes the bulk of Hollar’s sales will come from mobile phone browsing and shopping. The 30-person company plans to launch an app in the next couple of weeks, which Yeom said will attempt to replicate the experience of rummaging through bins and finding must-have items, which he considers an appealing aspect of bargain shopping.

Hollar was co-founded by Honest Co. Chief Executive Brian Lee, who serves as the company’s executive chairman. Lee has been a prolific tech founder in Southern California over the past decade. In addition to Honest Co., Lee also co-founded LegalZoom Inc. of Glendale and ShoeDazzle, which was bought by Santa Monica’s JustFab in 2013.

“Raising a seed round to Series A in a short period of time really has to do with the people we have,” explained Yeom. “I pinch myself when I think about our founding team.”

Hollar’s Series A funding round will be used to acquire customers through advertising, better source imported products and ramp up hiring, he said.