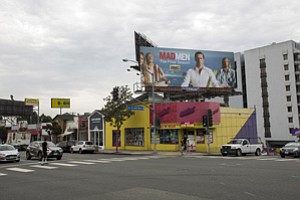 The Sunset Strip has gone through many incarnations over the years, from Rat Pack hangout to rock ’n’ roll destination to cocaine-pickup location, but these days it’s all about those cranes.

A partnership housed at the Beverly Hills offices of developer Sonny Astani is the latest to snatch up prime property on the Strip, a development site that could add to the 789 hotel rooms and 254 residential units under construction or in the pipeline on Sunset Boulevard between Doheny Drive and the Chateau Marmont.

A limited liability corporation called Sunset BLA 2726, registered at the offices of Astani Enterprises, last month shelled out $11.5 million for a 4,700-square-foot retail building on an 11,000-square-foot parcel at 8874-78 W. Sunset, home to the semi-iconic cheapo Aahs! gift shop. It paid a whopping $2,400 a square foot for the site. The same group acquired the adjacent stores, at 8866-72 W. Sunset, in January for $1,300 a square foot.

Astani isn’t talking about plans for the site, but the prices paid have led to speculation that a mixed-use project is on the horizon.

“At that purchase price, it has to be mixed use,” said Gabe Kadosh, a vice president at Colliers International who works in West Hollywood. “That goes in line with everything else that’s going on (on the Strip).”

The sellers of the Aahs! site, Brotherton Family Trust of 1996 and the Morgan Family Trust, could not be reached for comment.

Rachel Dimond, a senior planner for West Hollywood, said the city has not received any proposals. Babloo Sawhney, owner of Aahs!, which has five other L.A. locations, is equally in the dark.

“I have no idea whether we will stay open or not,” he said.

Whatever the development plans, a mixed-use property would fit right into the narrative of West Hollywood as of late, and with the combined two properties, Astani would be working with 17,600 square feet of land. The value of a development would depend on a variety of factors, including its height, uses and construction materials.

“Things are trading at high prices, and I think Sunset has always been a desirable real estate play for sophisticated players, but now more than ever,” said Jeff Klein, owner of the Strip’s Sunset Tower Hotel. “I can’t think of another corridor with the same retail and hospitality blend.”

It’s hard to avoid the amount of construction on the Strip in the area surrounding the Astani site. Four cranes several blocks east are building CIM Group’s project at 8490 W. Sunset, which will include 190 residential units, 40,000 square feet of retail and a 296-room James Hotel Los Angeles. Several blocks west of the site, at 9040 W. Sunset, the Edition West Hollywood, a Marriott hotel brand, is being developed by Witkoff Group and New Valley Realty. The New York developers recently broke ground on the 148-rooms, 20 residential-unit project designed by Ian Schrager.

Bruce Baltin of downtown hospitality consulting firm PKF Consulting USA said the uptick in mixed-use development is happening because projects shelved during the recession are seeing the light now that the economics are sound. It helps that West Hollywood is a strong market for every product type, he added.

The city stands to benefit from all the development, particularly hotels, because visitors pay a 12.5 percent transient tax plus an additional 3 percent tourism marketing tax.

Tourism to Los Angeles County increased by almost 5 percent last year, and Kadosh said that West Hollywood is particularly a magnet, leading to a high demand for hotel rooms.

The reasons people want to visit the city are similar to why people want to live there, he said, which is why residential mixed-use development is also popular.

“West Hollywood is a walkable city with high-end retail, and the mixed-use phenomenon is about bringing the New York lifestyle where there are a lot things going on in the same place,” he said.

The new projects will change the character of the Strip, Klein said, but that’s not necessarily a bad thing.

“I don’t think (the old) Sunset Boulevard needs to be preserved. We’re creating something new and I just hope it’s interesting,” he said.

Stephanie DeWolfe, West Hollywood’s director of community development, said this is a welcome new phase for an area that has been through quite a few.

“What we’re seeing is the evolution of the next era of the Sunset Strip and that’s generally a good thing,” she said.