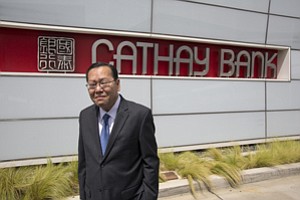 Banks tend to expand the same way most businesses do: by growing their footprint into neighboring territory. But as L.A.’s Chinese-American banks aim to grow, they’re looking 3,000 miles away.

More deals could be on the way soon.

With business at home going well, helped by a massive influx of Chinese money into Los Angeles, local Chinese-American banks are likely to stay in deal-making mode, and the Big Apple – particularly Flushing, a heavily Chinese neighborhood in Queens – is a juicy target.

“In order to continue to grow, we obviously have to look outside of our Southern California and Bay Area markets,” said Preferred Chief Financial Officer Ed Czajka. “The Flushing area does present a good opportunity. The Chinese population is fairly dense in that area.”

While Los Angeles and the Bay Area are epicenters of Chinese America, the New York metropolitan area actually has a larger Chinese-American population than either of the California regions, according to 2012 census estimates. That potential customer base hasn’t been lost on Heng Chen, chief financial officer of Cathay, L.A.’s second-largest Chinese-American bank.

“We have almost $2 billion of loans in the New York City area, so it’s already a large market for us,” Chen said, mentioning Cathay’s $5 billion in loans to Southern California borrowers as a comparison. “It’s got a large Chinese population and it’s a global capital market location.”

“There are a lot of small Chinese banks in New York and it’s a less consolidated region,” said Julianna Balicka, an analyst who covers several banks including Cathay for the San Francisco office of New York investment bank Keefe Bruyette & Woods Inc.

“If you look at other places, there are just a handful of independent Chinese banks and they’re much smaller than those in New York,” he said.

Houston has a substantial Chinese-American population, and in January, East West bought MetroCorp Bancshares Inc. in that city for $268 million in cash and stock. But Chen said the remaining Chinese-American banks in that state, including Houston’s American First National Bank and Southwestern National Bank, have little interest in selling.

Chicago has two Chinese banks that are too small to be interesting acquisition targets, Chen added, while the Bay Area, like Houston, lacks motivated sellers.

Czajka sees the market much the same way.

“There’s a smaller one in Seattle, but I’m not sure that really pops up on anybody’s radar,” he said. “Other than that, that’s basically it.”

Some mainstream L.A.-area banks, most notably Century City’s PacWest Bancorp Inc., downtown L.A.’s Grandpoint Bank, and Irvine’s Banc of California Inc. and Opus Bank, have rapidly grown their balance sheets in recent years mainly by acquiring other banks in Southern California and nearby states such as Arizona.

But Balicka said consolidating locally wouldn’t be that appealing for Chinese-American lenders here, as many of them already have a substantial presence in most of the Chinese-speaking neighborhoods of greater Los Angeles.

“It makes little sense to acquire a small bank in L.A. for a bank like Cathay where they have market share already,” Balicka said. “In New York, Cathay can still pick up market share.”

What’s more, the growth strategy for an ethnic bank is different by necessity as banks have to follow their core clientele.

For example, Koreatown’s Hanmi Financial Corp. last September bought United Bancorp in the Dallas suburb of Garland, Texas, which gave Hanmi a presence not only in Texas, but in other heavily Korean neighborhoods in Illinois and Virginia because United had branches there.

That leaves New York as one of the few places with viable acquisition options for Chinese-American banks – but if New York’s your only option, it’s not a bad one.

It would be one thing if the compelling acquisition opportunities were in Cincinnati, but being in New York isn’t just going to bring in new customers – it should pay dividends for existing clients as well. That could be a little extra motivation for banks to be aggressive.

“We have some L.A.-based customers who have New York operations,” Czajka said. “This is going to broaden the services we can provide them.”

Assuming interest rates will go up eventually and banks can make a little more money on loans – and maybe as concerns about the Chinese economy underline the case for the U.S. as a safe haven for its nationals – Chinese-American banks are likely to look to make deals to capitalize on that growth. Czajka said he expects there to be increased M&A activity over the next few years.

If that happens, Chinese-American banks looking to make a deal are likely to look east.

“There’s just not that many left in L.A.,” Balicka said.