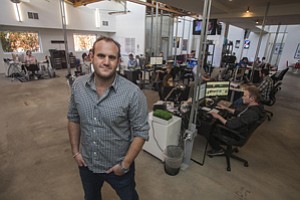 Focused In on Content: Jonathan Skogmo at the Culver City headquarters of viral video firm Jukin Media in May 2014. Photo by Ringo Chiu.

Viral video license firm Jukin Media says rivals are stealing its videos, and it’s not going to take it anymore.

The Culver City business expects to generate between $15 million and $20 million in revenue this year in part by licensing its library of more than 17,000 videos, a library it built by scouring the Internet for clips that can go viral. It buys those clips and licenses them to third-party publishers and broadcasters.

The model has been wildly successful – Jukin’s videos are watched more than a billion times a month – and that, the company said, has led others to hijack its videos and market them as their own, costing Jukin lost ad and licensing revenue.

Jukin’s biggest target in its aggressive push to stop the practice is Break.com, a website owned by Defy Media, a New York Web publisher formed in 2013 with the merger of L.A. digital media firm Break Media and New York’s Alloy Digital.

Jukin claims that nearly 500 of its videos (“Boxer Dog goes NUTS!” and “Groom drops bride” among them) were improperly posted to Break.com, which publishes funny and shocking videos that generate millions of monthly views across its Website and YouTube channel.

The alleged thefts started nearly two years ago. Jukin said it submitted take-down requests to the company in compliance with the Digital Millennium Copyright Act. The law was designed to protect sites such as YouTube and Defy from copyright infringement claims if they were unaware that users had posted other’s copyrighted work on the platforms. The supposed infringements by Defy took place as recently as Aug. 5, when Jukin alleges some clips were made available to watch via Defy’s X-Box app.

While some videos on Break’s site are posted by users, Lee Essner, Jukin’s president and chief operating officer, said the company believes that the Jukin videos in question were uploaded by Break’s employees based on characteristics of the posters’ profiles, the manner in which they were posted and the wording of video titles, among other factors, which all point to a coordinated effort.

“We invoiced them prior to filing the complaint and told them we believed this was their employees,” said Essner, a former corporate attorney.

“They told us we were wrong and basically challenged us to sue them,” he added, saying that this is the most egregious case of alleged copyright infringement committed against Jukin to date. “We had no choice but to protect ourselves and our content owners.”

To do that, Jukin has gone to federal court, accusing Defy of copyright infringement, unfair competition and tortious interference with its business. If Jukin can prove that Defy employees posted the video, Defy would not be entitled to protection from litigation under the Digital Millennium Copyright Act’s safe harbor provision. If not, Defy could be in the clear.

“That will be the key question here,” said Jonathan Steinsapir, an intellectual property attorney and partner at Kinsella Weitzman Iser Kump & Aldisert in Santa Monica, who reviewed the case for the Business Journal. “If that is going on, it’s pretty straightforward.”

Jukin was founded by Jonathan Skogmo, its chief executive, who launched the company in 2009 after working as a producer on Country Music Television show “Country Fried Home Videos.”

He was among the first to negotiate revenue-sharing agreements with video creators. Essner said the company often pays thousands of dollars for the rights to a particular clip. If those clips are licensed by other parties for use online or in television broadcasts, they could generate thousands more in revenue above what Jukin paid for them, in addition to ad money generated by Jukin on its own channels.

Some of the videos involved in the dispute with Break were allegedly posted on Break’s proprietary video player, which means that Jukin could not use YouTube’s internal complaint process to have advertising revenue redirected to it. That, coupled with the lost licensing revenue, means Jukin’s potential lost revenue could stretch into the millions of dollars, though an exact amount is unclear.

Jukin also claims in court documents that when Defy began trying to obtain rights to videos from individual creators, the company spread “false and misleading rumors about Jukin and its business practices, in order to deter such video creators from licensing the video to Jukin.”

Should they prove those charges in front of a jury, Jukin could be entitled to punitive damages, said Steinsapir.

A Defy representative did not respond to a request for comment. The company has until Sept. 3 to answer the charges in court.

Jukin is also dealing with the copyright issue on a separate front. The firm is battling popular YouTuber Ray William Johnson and his Beverly Hills production company, Equals Three, in U.S. District Court. It says in that case that it should be compensated for its clips used on his online series “The Equals Three Show,” in which he humorously discusses popular clips. Nearly 11 million people subscribe to Johnson’s channel and 140 million have watched episodes of the show since it premiered in 2009.

Jukin claims that Johnson improperly used dozens of its clips in his show without paying for a license. When Jukin discovered this, it filed a complaint with YouTube, resulting in the platform redirecting advertising revenue from Johnson to Jukin. Johnson countersued them to get that money back, after which Jukin responded by alleging copyright infringement.

Johnson claimed in court documents filed in January that his actions amount to fair use of the material because his show constitutes a parody.

“E3 episodes incorporating the Jukin-claimed videos unquestionably criticize and comment on the original,” reads the filing.

Johnson did not respond to a request for comment.

Jukin asserted that Johnson’s actions amount to theft because he did not fundamentally transform the videos in any way.

“We believe their refusal to pay was because if they paid us they would have to pay everybody,” said Essner.

The parties are waiting for a judge to decide the fair-use question, with a ruling expected by Sept. 8, according to Johnson’s attorney.

Essner declined to say what all the litigation is costing the company or whether the amount it stands to gain in damages should they win is worth it. However, willful acts of copyright infringement carry a statutory penalty of up to $150,000 for each work that was stolen. The upside is clear.