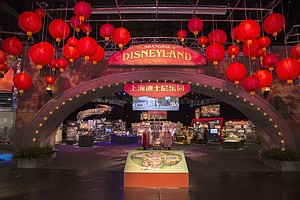 An animatronic dragon lurking underneath an enchanted castle might seem like a fun and appropriate addition to Walt Disney Co.’s theme park being built in Shanghai. At least, it might seem that way to the average American.

But it turns out the dragon is held in high esteem as a symbol of dignity in China, so the idea for a lurking robotic one was scrapped.

It was just one of the changes to the park’s initial plans made as a result of weekly Chinese culture lessons held for the staff of Walt Disney Imagineering, the entertainment empire’s design and development arm, aimed at helping them think like their newest customers.

“We know Disney but we didn’t know China, so it was about being open to learning,” explained Bob Weis, executive vice president of Walt Disney Imagineering in Glendale, where the Shanghai project has been planned.

Disney, of course, has opened international parks before – in Paris, Tokyo and, in 2005, Hong Kong – and all of those parks have added more local elements over time. With the new park in Shanghai, its first in mainland China, Disney is adding more of those elements upfront.

One clear example of the strategic shift: The Shanghai theme park will be the first by Disney to not feature an area modeled on the Main Street USA found at the original Disneyland park.

Disney analyst John Janedis, who follows the firm for New York brokerage and investment bank Jefferies, said educating park planners about Chinese culture and having more Chinese cultural elements from the get-go are good moves, as a Chinese park that caters to Chinese tastes should perform better than a more American version.

“Companies make mistakes when they try to force their own culture on the culture of the market they are entering and these educational sessions Disney has initiated tell you how important it is to them to make a success of this,” Janedis said.

The culture classes – which ranged from film screenings to history lessons – resulted in a handful of big changes to the plans for the $5.5 billion Shanghai Disney Resort, which is set to open in the spring.

For instance, plans to include American fare such as hot dogs and hamburgers among food options at the park were scrapped when imagineers learned locals aren’t that interested in foreign food. So in addition to basic rice bowls and fiery woks there will be poultry and fish dishes cooked in Chinese style and regional cuisine from across the country.

One of the main hotels at the resort had initially been planned to resemble the standard design of the hotels found at Disney properties in Orlando, Fla., and Anaheim but it was instead redesigned in the shape of an 8, a lucky number in Chinese culture.

And the reverence for dragons – seen in China as benevolent creatures with divine origins – led to the abandonment of the idea for a lifelike one that would reside in the water beneath the park’s central castle.

Speaking at the same expo, though, Disney Chief Executive Bob Iger presented plans for the Shanghai park, describing it as “authentically Disney and distinctly Chinese.”

To get the latter part right, Disney hired Shanghai native Chang Xu as a cultural analyst and sent her and a team of two other Chinese nationals to Glendale to teach theme park designers there about Chinese folklore, language and mind-set.

“It’s about helping our team in California understand 5,000 years of Chinese culture and learn what’s happening right now, to stay relevant to contemporary trends,” Chang said in a statement.

The half-day culture classes started in 2010, the year before Disney broke ground on the Shanghai resort, and have taken various forms, from screenings of Chinese cartoons to Mandarin lessons. They involved all the imagineers working on the Shanghai park.

The classes are a testament to the importance of the Shanghai park both for Disney and Iger. In 1999, the same year he was named president of Walt Disney International, overseeing the firm’s global operations, he traveled to China to meet with government officials about opening a Disney park there.

In 2011, Disney broke ground on the 963-acre resort. While the company will have operational control of the park, it owns only 43 percent of the venture, with the rest held by Shanghai Shendi Group, a consortium of state-owned companies.

At D23, the centerpiece of the convention floor was an exhibition dedicated to Shanghai Disney Resort, listing all of the park’s features and attractions.

Highlights include the Garden of the Twelve Friends, a themed garden containing 12 murals re-imagining Disney characters as symbols of the Chinese zodiac; a Mandarin-language production of Broadway stage hit “The Lion King”; a section of the park based on the “Pirates of the Caribbean” film franchise, which is huge in China; and Soaring Over the Horizon, a re-invention of the Disney California Adventure attraction that provides on-screen aerial tours, with the new one featuring the Great Wall of China and other iconic Chinese locations.