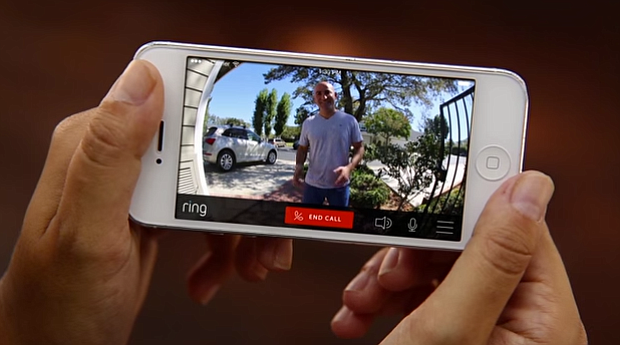 Ring’s doorbell video camera, speakers and microphone can be accessed using a mobile app. The so-called smart doorbell also has motion detection sensors, which push movement notifications to a user’s cell phone and cause the video camera to automatically record nearby activity.

Ring doorbells cost $199 each with a $30 annual fee for cloud-based video storage. The company declined to disclose sales or revenue figures, but said it has sold thousands of doorbells.

Ring, founded in 2011, has grown its employee count from about 30 a year ago to 120 today. The company expects to grow to about 200 employees by the end of the year, with many hires being brought aboard to improve Ring’s motion-detection and video technology.

Ring founder and Chief Executive James Siminoff said his team might use video footage to look for behavior patterns of burglars as they approach victims’ front doors. Ring video footage has already been used to make at least 10 arrests, he said.

The video recording feature won over Virgin Group’s Branson after a Ring customer staying at his Necker Island home showed him footage of a user interacting with a delivery person. Branson now is a customer and a significant shareholder.

But more than recording crime, Ring is useful in deterring crime, Siminoff said. Users can view and speak with anyone at their front door using the smart doorbell’s microphone, speakers and mobile phone app.

“They don’t know if you’re home or half-way around the world,” he said.