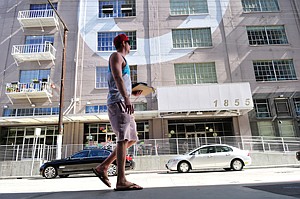 Downtown L.A.’s Arts District in recent years has lured urban pioneers who want to live in converted industrial buildings on the fringe of the urban core.

The neighborhood they carved out of the old manufacturing and warehouse zone has become so vibrant that land values have climbed and developers are circling, eyeing undeveloped or underutilized properties they see as ripe for new housing stock. Now, that interest is causing a split in the development community between those who favor converting old warehouse and industrial buildings to residential or mixed uses and others who want to start their projects from the ground up.

The differing views came to the fore at the end of July, when L.A.’s Department of City Planning emailed a proposed zone that would change what could be built in the Arts District and how it could be built.

At the heart of the debate are two primary issues: the minimum size of live-work units and the type of construction allowed in the zone.

Preservation proponents sought zoning limits that kept minimum 1,000-square-foot live-work units and construction restricted to steel, concrete and glass with a limited amount of heavy timber. But the planning department’s proposal, released July 31, calls for minimum 750-square-foot units and allows less expensive stick-frame and stucco buildings. It does, however, include incentives to use concrete, steel, glass and heavy timber by allowing greater density, said Craig Weber, a city planner with the planning department.

The upside of creating denser projects constructed with less expensive materials, proponents argue, is it allows for more affordable units to be built.

“Mandating steel and concrete frame structures can ultimately raise the cost of construction and make the units unaffordable to many tenants who want to occupy these future developments,” the planning department wrote in its draft proposal, which would not change zoning in the Arts District but instead would create a zone for which developers could apply for individual projects. It also responded to the request for larger units. “Live-work tenants are anticipated to be engaged in a variety of occupations, requiring both large and small units; the diversity of unit sizes will ensure that units can accommodate a range of incomes.”

Dana Sayles, a land-use consultant with Culver City firm Three6ixty who has been involved with the zoning discussions through work with her clients, put it more frankly.

“You can’t build a bigger unit and charge a smaller rent,” she said.

But some are alarmed that such construction would change the character and quality of the neighborhood by allowing more buildings like the 438-unit One Santa Fe development at 300 S. Santa Fe Ave., which many on the preservationist side see as out of step aesthetically with the neighborhood.

“The most attractive element of One Santa Fe is how it looks on a pro forma,” said Adam Tischer, a senior vice president in the downtown office of Colliers International, who works in the Arts District. “Otherwise, I’ll pass.”

Another concern is that the greater leeway under the proposed ordinance could drive prices up, making the idea of affordability illusory.

He said that in addition to aesthetics, large concrete, steel and glass buildings – while expensive to build – are better for renters. When smaller “live-work in name only” apartments can be built for cheap, he said, land prices soar on speculation and cause rents to rise.

Developers interested in density, on the other hand, applaud the plan as proposed.

“From our perspective, (it) provides a process where there is none and creates housing,” said Dale Goldsmith, a land-use lawyer at Armbruster Goldsmith & Delvac in Brentwood who represents several developers active in the Arts District. “It will allow developers and my clients to maximize the value and make money.”

That there is money to be made is not in dispute.

Maxxam Enterprises last month plunked down $18 million for a 54,000-square-foot parcel in a deal with hotelier Jon Blanchard, chief executive of downtown development firm BLVD745. Blanchard sold the property, at 1100 E. Fifth St., to Maxxam 30 days after he acquired it for $15 million. Maxxam executives did not respond to calls seeking comment on their plans for the site.

The rising prices will also lift the boats of those who wish to maintain the neighborhood’s character.

“I have property that greatly benefits if this passes,” said Borman. “All developers would benefit economically if we wanted to sell to speculators who will whitewash the neighborhood. But (the developers) fighting this zone have done well for ourselves by promoting artisans and makers to the point where there are now other people that want to come in and exploit that community.”

The draft ordinance is set to go before the City Council’s planning commission Aug. 13.

The office of 14th District City Councilman José Huizar, who represents the Arts District and helms its Business Improvement District, said he would not comment on the issue until it reaches the council’s planning and land-use management committee, the final step before a full council vote.

If the proposal clears the committees and is passed by the council, tensions are likely to continue.

Yuval Bar-Zemer, a partner at Linear City, which restored and converted the Toy Factory Lofts, and a longtime Arts District resident, said that if passed, the new zoning rule would only serve to arm opponents of larger, denser projects.

“Now the community is super educated and can articulate what it wants to every developer that has to convince them, so it’s setting us up for a collision course,” Bar-Zemer said.

The lobbying effort in support of what is being called the Hybrid Industrial Live-Work Zone got under way in earnest last week with the launch of a website, supportthehiordinance.com. The site was put up by downtown lobbying firm Urban Strategy Group which declined to say on whose behalf it is working. The firm has in the past worked with several developers that have pending downtown projects, including former Manhattan Beach insurance salesman Kevin Burke and residential developer Izek Shomof.