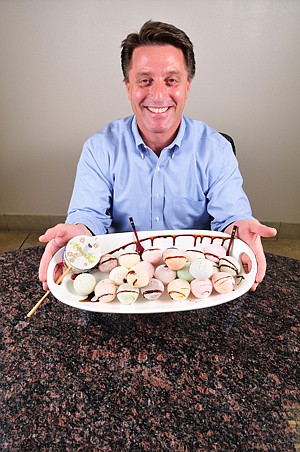 The 1984 Summer Olympics brought much of the world to Los Angeles. They also sent Joel Friedman to Japan, where he came up with an idea for a now-beloved dessert that transformed his wife’s family’s traditional Japanese pastry business and is helping it thrive past its 100th year.

Now, Vernon’s Mikawaya, the creator of mochi ice cream, is ready to re-invent itself once again, this time with the help of an L.A. private equity firm and a former tortilla slinger.

Behind an influx of cash from El Segundo’s Century Park Capital Partners and a new boss, former Mission Foods executive Jerry Bucan, the company is about to execute an expansion plan that it hopes will make its mochi ice-cream balls as ubiquitous as guacamole.

But the frozen spheres might never have been invented except for Friedman’s insistence on avoiding the Olympic circus.

Back in August 1984, Friedman couldn’t wait to get away from the predicted Olympics-related gridlock – which never materialized – and was lucky enough to have a business trip to Japan scheduled the day the games started. He was headed to the Far East to buy gift sets of rice crackers to sell during Christmastime at the flagship Little Tokyo location of Mikawaya. His wife, Frances Hashimoto, was the company’s chief executive.

When he got to Tokyo, a friend took him for a snack of yukimi daifuku, a soft-serve dessert that includes rice milk and mochi, a sticky rice cake Mikawaya had made for decades. Friedman was intrigued but not impressed.

The flawed treat stayed on his mind the entire week he was in Tokyo. Then, on a bullet train ride to Nagoya, he came up with the idea of wrapping the soft, slightly elastic mochi cake around balls of ice cream.

“Somewhere between Tokyo and Nagoya, mochi ice cream was born in my head,” Friedman said.

While selling traditional Japanese pastries kept Mikawaya thriving for its first 90 or so years – and remains a valued part of the business – mochi ice cream now makes up the vast majority of the company’s revenue.

“We’re the mochi ice-cream company,” Bucan said. “That’s what we do better than anyone else.”

Founded by Ryuzaburo Hashimoto in 1910, Mikawaya has operated a Japanese pastry shop in Little Tokyo ever since – except for a four-year interruption during World War II when the Hashimotos were forcibly relocated to an internment camp in Arizona.

After Friedman came up with the idea for the frozen treat, he and his wife spent a decade perfecting the product and figuring out how to mass-produce it. In April 1994, they chose Hawaii as mochi ice cream’s first test market – and captured a 13 percent share of the state’s ice-cream market in just three months.

In 2009, Mikawaya moved its headquarters into a state-of-the-art factory in Vernon capable of housing its soup-to-nuts – or cream-to-rice – operation, producing and packaging the product for shipment nationwide.

Friedman took over as chief executive when his wife died in 2012, but he didn’t see a natural successor in the family. His banker introduced him to David Iannini, chief executive of William & Henry Associates, a boutique investment bank in Century City.

Iannini said Friedman wasn’t interested in a purely financial partner who would just cash him out. He wanted someone with branding and marketing expertise who could keep the company thriving for another century.

“He was obviously concerned about the legacy of the business,” he said.

There was plenty of interest in the company when Iannini reached out to potential investors, but Century Park was the first choice fairly early on, he said. Century Park’s local ownership was a big factor, but Bucan, the former Mission executive, was bigger.

“I think Jerry was really the key to the deal,” Iannini said. “Century Park’s a good group, but you can get money from anywhere. I think Jerry’s particular expertise taking an ethnic local brand mainstream was the difference.”

Bucan comes from a long line of A&W Restaurants proprietors, so innovative uses of ice cream is in his blood. But what really excited Friedman and the Mikawaya team was Bucan’s experience as a brand manager for Irving, Texas, Mexican food giant Mission.

There, Bucan led a team that helped take tortillas from a niche ethnic food product to the foundation of a ubiquitous office lunch item: the sandwich wrap.

After a recent stint at Compass Minerals in Overland Park, Kan., where he expanded the mostly industrial firm’s food salt business, Bucan wanted to get back into the heart of the food sector and was looking to partner with a private equity firm to buy and run a specialty food company.

At the same time, Century Park was circling Mikawaya and needed a chief executive. Mutual contacts put them in touch, and Bucan was able to win Friedman’s trust over a yearlong courtship.

“I think Joel sensed the accurate admiration and respect I had for the company, the products and its legacy,” Bucan said. “I grew up in a three-generation family of restaurant owner-operators, so I had a real solid appreciation of what they had gone through.”

Bucan wouldn’t disclose financial figures or terms of the deal, but Century Park bought controlling interest in the company. Friedman is no longer active in operations, but he is a director. The company has three retail locations: Little Tokyo, Torrance and Santa Anita in addition to its Vernon headquarters.

Bucan said Mikawaya is profitable and believes it to be the top seller of mochi ice cream in the United States, with twice the market share of its closest competitor, Irvine’s Maeda-en – though he acknowledges there’s not much data on the mochi ice-cream market.

He wouldn’t share details on individual retail partners, but Monrovia grocer Trader Joe’s is one notable customer, stocking mochi ice cream mostly in West Coast markets as well as in select cities in other regions.

But mochi ice cream is still unknown to large swaths of America, and that’s where Bucan thinks the company has the opportunity to grow – by turning regular ice-cream buyers into mochi ice-cream buyers.

To that end, his plan for Mikawaya is to target high-end regional grocery chains as well as retailers that are interested in carrying a niche product that their primary competitors won’t have.

“It’s about creating some exclusivity and a certain treasure-hunt aspect to this,” Bucan said.

He also hopes to use his experience marketing ethnic foods to a wider audience to help mochi ice cream gain traction outside of Asian communities and the West Coast. Part of the plan is to give consumers who are not familiar with the product some ideas for using the ice-cream orbs in different ways – just as Mission’s marketing helped promote the tortilla as a base for deli turkey, not just carne asada.

Rob Holland, a partner at West L.A. private equity firm Creo Capital Partners, which has made several investments in packaged-food businesses, said frozen foods in general have fairly modest growth potential, but ethnic foods seem to be the exception.

“The ethnic category is one that I think is very much worth investing in,” he said. “And the next generation of investment in ethnic foods is going to be flavors from Asia.”

Another big trend in the food industry has been companies coming up with bold – or purposely outrageous – flavor combinations designed to get attention on social media.

Bucan said Mikawaya has been actively working on experimental flavors and inclusions for mochi ice cream – though he wouldn’t divulge specifics – and shoppers can expect a much wider variety then the 12 flavors currently for sale.

But while Bucan is dedicating most of his resources toward growing Mikawaya’s signature product, he’s careful not to overlook the company’s traditional pastry roots. The company still operates a handful of retail bakeries and ice-cream shops, and Bucan said Mikawaya will not abandon the pastry business. L.A.’s Japanese community, which Bucan admits surprised him with its fervent interest in the new ownership of Mikawaya, wouldn’t let him.

“The community really seems to have a sense of ownership in this company,” he said. “They’re almost like honorary shareholders.”