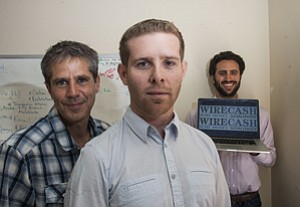 The airline ticket office was replaced years ago by websites and mobile apps. But the multibillion-dollar remittance industry is still as low tech as air travel was back in the days of in-flight smoking.

And that’s where Santa Monica startup WireCash sees big dollars – and pesos, rupees and shekels, too.

The company, which went live March 31 – but whose technology had been in the works for years – is a virtual marketplace that offers money-transfer services on behalf of a handful of remittance shops that don’t operate online. Users in the United States can use WireCash’s website to send money from a checking account – and soon, a credit or debit card – to recipients overseas through partnerships with money-transfer companies, which provide the on-the-ground infrastructure in those destination countries.

Chief Executive Jonathan Cooper embraces the air travel analogy, comparing WireCash to Expedia Inc. in Bellevue, Wash., which allows prospective travelers to search for, compare and book flights all on a single site.

The company has already enlisted five money-transfer providers serving more than 60 countries, and Cooper has imminent plans to add more.

U.S. residents send about $120 billion overseas each year, according to the World Bank, and Cooper said nearly 75 percent of that sum is processed through offline companies. WireCash’s mission is to make those money senders available the way most Americans prefer to shop nowadays – via the Internet – while taking a cut in the process.

“We see that these customers are moving – just like every other industry in America – online,” Cooper said.

Cooper and Grushkowsky – who started his first company, a DJ website, when he was 14 – developed a technology that allowed money to be transferred from the United States and picked up almost immediately at ATMs in various countries.

“We remitted millions of dollars to over 100 countries successfully and safely,” Cooper said. “As a consequence, many of the offline money-transfer companies have come to us and asked us if we would provide services for them.”

The joint venture lasted from 2009 until late 2012. Like many traditional banks, KeyBank did not view money remittance as a core business, and Cooper said that’s why that partnership didn’t progress further.

So, backed by more than $5 million from an institutional investor, Cooper and Grushkowsky launched WireCash. Logan Lemberger joined as vice president of business development in 2013.

Most of the money-transfer companies WireCash works with offer their services through neighborhood brick-and-mortar shops – the kinds that might also offer prepaid cell phones and check-cashing services.

Each transfer company has its own network of locations, usually specializing in different areas and immigrant communities. WireCash partner Prabhu Money Transfer, for instance, specializes in sending money to South Asia, while Pontual Money Transfer focuses on South and Central America.

But the WireCash team says the real secret sauce is their proprietary fraud prevention technology, which is based on matching and tracking pieces of data. It allows the company to process transactions within minutes with almost no fraud.

And it’s proven: Over the life of the KeyBank joint venture, losses due to fraud were less than one ten-thousandth of a percent of the total money sent, Grushkowsky said.

While it’s still a common assumption that the bulk of people remitting money oversees don’t use banks – and thus might not have need for an online money-transfer option – Cooper said that’s an outdated stereotype, and that most people sending money from the United States at least have checking accounts. And the experience on the other side is the exact same: WireCash works with established money-transfer companies that deliver the goods to the recipient in their preferred way.

“In the Philippines, someone on a scooter might come to your door and give you cash,” Grushkowsky said. “Or in Africa, money might be loaded on your phone bill.”

Arjan Schütte, managing partner of Core Innovation Capital in Hollywood, an investment firm that specializes in nonbank financial services, said that while the main remittance highway in the United States – to Latin America – remains stubbornly old-fashioned, he can see it catching on with other groups of remitters.

“I do think there are some corridors that lend themselves nicely to it,” Schütte said. “India and the Philippines are corridors served by more financially sophisticated people. You see the adoption of Internet-based remittances.”

One factor working in WireCash’s favor is the fact that the companies best suited to making cheap international financial transactions – namely, banks – have faced regulatory and legal hurdles when they’ve entered the business.

In one local example, Carson’s Merchants Bank of California, which had processed about two-thirds of all U.S. remittances to Somalia, recently ceased that line of business under pressure from the U.S. government’s anti-terrorism efforts.

WireCash facilitates money transfers through its marketplace, but it is not actually sending money to foreign countries – and not subject to the same regulations. It provides the online infrastructure, gives money to the money-transfer firms and lets them handle the rest.

“Their competitive advantage is in compliance, distribution and licensing,” Cooper said. “Our strengths are in technology and in payment fraud.”

Cooper said WireCash’s only direct competitor is San Francisco’s Xoom Corp., a public company that also uses a network of money-transfer partners. Xoom works with partners in 32 countries, about half as many as offered by WireCash. And Xoom, along with other competitors such as Western Union, will sometimes use old-fashioned fraud-prevention techniques such as asking for a copy of a passport or utility bill, while WireCash uses its technology to make immediate approvals.

Schütte, who likes several aspects of the business, said his biggest hang-up still comes back to changing consumer behavior around remittances.

“Typically, the remittance is not a single transaction,” he said. “I take my paycheck to a check casher and he does a bunch of stuff: pay a bill, send a remittance. But I like what they’re proposing.”

Cooper and Grushkowsky believe that as long as they keep processing payments quickly and cleanly, customers will come around. After all, it’s the same way they won over the skeptical, old-school money shops they’ve built their business on.

“A lot of them sent money through it and they saw it worked,” Grushkowsky said. “Those companies trust us. It’s very, very hard to be a new guy and convince everyone that you’re the right choice.”