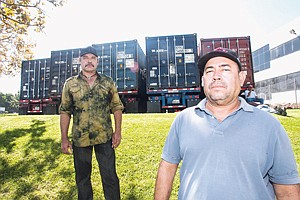 The Teamsters union has a new page in its playbook as it continues its quest to unionize local port truckers.

Call it an end-around: Instead of going after a trucking company directly, the union is putting pressure on public pension funds that own stakes in trucking firms by way of a private equity fund.

Union representatives have asked the Los Angeles City Employees’ Retirement System and Los Angeles Fire and Police Pensions to pull money out of Saybrook Capital, a West L.A. private equity group that owns a trucking company, unless the trucking company addresses alleged labor violations or allows its drivers to unionize.

“What we are asking the pension funds to do at this point is to reach out to Saybrook and ask them to follow the labor laws,” said Barbara Maynard, a Teamsters spokeswoman. “If they refuse, then we would follow up and ask for divestment.”

The trucking company and Saybrook did return phone calls seeking comment. But Vic La Rosa, president of the trucking company, wrote a letter this month to one of the pension funds, saying the Teamsters are badmouthing Total Transportation in a desperate attempt to build support for a union drive.

“In short, these claims are nothing more than an ongoing attempt to unionize contractors, who despite 24 months of heated organizing activities, including demonstrations, pickets, boycotts, litigation, personal attacks and public harassment, have rejected their proposal,” La Rosa wrote.

Going after Saybrook and its pension fund investors is a new, indirect approach by the Teamsters, which earlier this year organized strikes at Total Transport and a handful of other harbor trucking companies.

But Maynard said the strategy is simple: If drivers’ bosses won’t give them what they want, they’ll take their case up the chain of command.

For now, Total Transport is the only target of this new union approach. The union is feuding with other local trucking companies but doesn’t yet know if other companies have similar ownership structures that lend themselves to this tactic.

The union’s immediate beef with Total Transport is its claim that 35 drivers, including Rafael Valadez and Juan Martinez, were denied work after filing complaints against the company with state labor officials.

“When we started organizing, the company began their retaliation against us,” Martinez said in Spanish through a Teamsters interpreter. “They started reducing our work. We almost got no work.”

Peter Melton, a spokesman for the California Department of Industrial Relations, said the department is investigating 25 retaliation claims against Total Transport.

Those complaints followed a July strike against Total Transport and two other trucking companies. The strike ended with a promise by the Los Angeles Harbor Commission to investigate drivers’ claims.

The Teamsters for years have sought to unionize port truckers, who usually work as independent contractors instead of full-fledged employees. Only employees can join unions.

The union supported a plan – part of the L.A. port’s Clean Truck Program – that would have required trucking companies at the harbor to use only employee drivers, but the Supreme Court threw out that requirement in 2011. The Teamsters then focused on lobbying state and federal regulators to investigate trucking firms over whether drivers should be classified as employees or independent contractors.

Those strategies helped the union organize a handful of firms.

Australian firm Toll Group gave its local drivers coveted employee status under the assumption that the Clean Trucks Program would have forced them to do so anyway. Drivers there unionized in 2012.

Earlier this month, Oak Brook, Ill., trucking company Hub Group Inc. reported in a Securities and Exchange Commission filing that it would switch drivers working in California to employee status after deciding to settle litigation over the classification issue.

Despite those successes, the union has fallen short of its goal of organizing most harbor truckers.

Executives at other harbor trucking businesses said that they believe the Teamsters’ new strategy against Total Transport will fall short, too.

Bob Curry, president of Long Beach trucking and warehousing firm California Cartage Co., said bluntly that he doesn’t expect the union’s approach to influence anyone in the business of trucking goods to and from the harbor.

“I don’t think anybody’s paying any attention to it,” he said.

Alex Cherin, executive director of the Harbor Trucking Association trade group, said Total Transport and its investors are frustrated by the union’s latest attempt to pressure the companies, but think the unusual nature of the tactic reflects Teamsters’ desperation.

“They are looking at nontraditional ways to gain leverage and I don’t think it’s having the impact they hoped it would have on the companies or the drivers,” he said.

But one of the pension funds indirectly invested in Total Transport, the Los Angeles City Employees’ Retirement System, or LACERS, has taken action before on workers’ behalf.

LACERS was among a handful of pension funds that union representatives turned to in their 2010 campaign to keep a Hugo Boss factory open in Ohio, said Elizabeth Greenwood, a LACERS board member who chairs the fund’s governance committee.

For now, though, neither LACERS nor the pension fund for Los Angeles police officers and firefighters has agreed to take sides in the Teamsters’ dispute with Total Transport. The pension funds are relatively small players among Saybrook Capital’s investors.

Ray Ciranna, general manager of the fire and police pensions system, said he plans to make a presentation on the labor dispute during an Oct. 2 board meeting.

“I’m not sure what the board’s going to want to discuss, if anything,” he said.

LACERS, meanwhile, is waiting for the Harbor Commission to present the findings of its investigation before deciding whether to get involved.