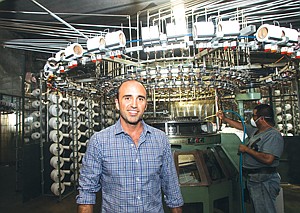 The knitting machines inside SAS Textiles’ new Vernon factory hum as they take in long strands of white yarn and churn out basic fabric used to make T-shirts and tank tops. But in a few months, upgraded machines there will produce more advanced fabrics, the kind used for yoga pants and workout shorts.

The company has invested millions this year in a new plant and equipment, all part of a plan to capitalize on a booming market for activewear. Sean Sassounian, co-founder and chief executive, said SAS will introduce its first line of so-called performance fabrics – SAS Sport – by year’s end.

SAS has always sold primarily to fashion companies, not makers of activewear. But yoga pants and other performance apparel items have become everyday fashion statements, and Sassounian said he thinks he can sell both fashion and performance fabrics to clothiers taking advantage of that trend.

“We’re going to merge the two,” he said. “So customers that are only doing performance fabric, we’ll introduce them to some more fashion-forward items.”

SAS spent more than $1 million this year to buy new knitting machines and retrofit old ones to make performance fabrics, which use finer, synthetic fibers than other textiles. The company also paid $9.9 million for a new factory, moving from two smaller plants, also in Vernon, into a 164,000-square-foot plant in June. Before moving into the new 44th Street site, SAS spent $3 million more on improvements, including an upgrade to the building’s electrical system needed to power the company’s 130 knitting machines.

Sassounian said he was convinced he had to start making performance fabrics after reading reports on the growth of activewear sales – and seeing stores filled with sporty clothing.

But before SAS Sport fabrics can be found in those stores, Sassounian and his company must find new customers to buy SAS Sport goods. The company’s sales team currently has four members and Sassounian plans to add two or three. Although the fabric will be made to modern specifications, selling textiles is still an old-school job of meeting clients personally and showing samples. “We’re building from scratch,” he said. “We’re going to sell to some of our existing customers and then go after active wear,” he said.

Activewear, much of which uses performance fabric, has been a bright spot in an apparel industry that has otherwise been shrinking. Excluding activewear, U.S. apparel sales fell 1 percent year over year in the 12 months ended June 30, according to NPD Group, a Port Washington, N.Y., market research firm. Sales of activewear, meanwhile, grew 7 percent to $33.7 billion.

The sector now accounts for about 16 percent of all new clothes purchased in the United States. And as sales continue to grow, more companies are looking to start manufacturing performance fabrics, said Kathlyn Swantko, president of FabricLink of Tarzana, an online information source for the textile and apparel industries.

“There’s always new people that are hearing about it that want to get into it,” she said.

Sassounian and his father co-founded SAS in 1991 in downtown L.A.’s Fashion District. The company moved to Vernon about 20 years ago. At the time, the area had a greater concentration of textile producers than it does today.

Starting in the 1990s, textile manufacturing largely moved overseas to take advantage of lower labor costs. Between 1998 and 2012, the number of Los Angeles County mills fell from 510 to 211. Employment was cut by more than half to about 6,000.

Sassounian said SAS, which now has 50 employees, was able to keep manufacturing here because it specialized in small custom orders. Companies that moved out were geared toward larger production runs of commodity products.

“We were able to survive back then,” he said. “We weren’t as big as those guys, not the same overhead structure. We were set up to do smaller, quicker turns.”

Sassounian would not disclose SAS’ revenue, but said sales have increased only slightly over the past few years.

But he and others see an opportunity to pick up sales as the price difference between American- and foreign-made textiles shrinks. Manufacturing costs overseas, especially in China, have risen faster than costs here.

Scott Wilson, vice president of sales and development for Carson clothing maker J.S. Apparel, said the cost advantages of buying Chinese fabrics are narrower than before. He estimated the price difference between Chinese and American textiles has fallen by about half in the last few years.

“For the last two years, the trend has been going on shore, or near shore,” Wilson said.

Ilse Metchek, president of the California Fashion Association of Los Angeles, said that trend favors companies such as SAS that were able to keep producing domestically. While conditions for textile producers have improved, it’s still not worth it to start a factory from scratch.

“There is more being made here, which means the mills here are busier,” she said. “But there aren’t more mills.”