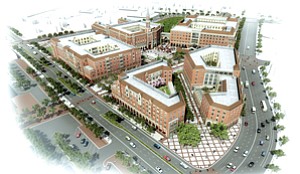 A downtown L.A. investor who recently purchased a prominent South Park development site was among those arrested last week when federal agents raided the Fashion District in connection with an alleged money-laundering scheme for international drug cartels.

Morad Ben Neman, 54, was arrested Sept. 10 after being named in one of three indictments unsealed by the Department of Justice. Chief executive of a fashion company called Pacific Eurotex Corp., Neman was arrested with three others connected to the company, including his brother Hersel Neman, 55, and brother-in-law Mehran Khalili, 45.

The indictment alleges that Neman and the others laundered roughly $370,000 in cash for an undercover agent who posed as a money courier. Some of the money even appeared to be “spattered with blood,” according to a statement by the U.S. Attorney’s Office.

Neman’s arrest comes four months after his Neman Real Estate Investments closed on the $25 million purchase of the carwash across Olympic Boulevard from L.A. Live. At the time, he was said to be planning a 476,000-square-foot mixed-use project that would include condominiums and hotel rooms.

Neman did not respond to a request for comment, and it was not clear how plans for the carwash property, already fully entitled, might be hindered by his indictment.

Matthew Sullivan, a managing director for Lee & Associates who knows Neman personally, said the indictment could prevent him from doing business with Neman in the future.

Assistant U.S. Attorney Julie Shemitz said Neman and his brother each posted $500,000 bond and were released from federal custody. Brother-in-law Khalili was released on a $50,000 bond.

The defendants were expected to be arraigned at Edward R. Roybal Federal Building and United States Courthouse on Sept. 15.

When Chinese commercial property developer Wanda Group announced last month that it had purchased the beleaguered former Robinsons-May site, the company did not disclose a price.

Last week, however, an attorney for the seller, Joint Treasure International, confirmed the price was significantly more than original estimates of a mid-$300 million price range.

Tony Natsis, a partner with Century City law firm Allen Matkins, said the coveted eight-acre parcel at 9900 Wilshire Blvd. traded in the low-$400 million range, more than $250 million above the $148 million paid for the property in 2011 by Joint Treasure, a Hong Kong private equity firm.

“(The price) shows you how erratic and cyclical land value can be, especially for a trophy property like this that cannot be duplicated,” Natsis said.

Wanda’s purchase of the property is the latest in a nine-year saga that saw the site change hands several times in deals involving an international cast of characters. Among those associated with the deal at one time or another were Mexican billionaire Carlos Slim’s Banco Imbursa, British concern Candy & Candy and Icelandic bank Kaupthing.

In 2008, the city of Beverly Hills approved plans for two condominium towers on the site with ground-floor retail and restaurants, but there was not action on the site until the department store building was torn down earlier this year. Wanda announced it would spend $1.2 billion to develop a mixed-use project on the site, but did not specify whether it would use the previously approved plans.

With the demolition of its outdated University Village complete, USC was expected to formally break ground this week on the $650 million first phase of its $1.1 billion two-phase master-planned Village at USC.

USC President C.L. Max Nikias said the first half of the massive project is expected to be completed before the start of the fall semester in 2017.

“We went through a very long process with the city to get approvals for this project – in fact the first three years of my presidency – so we are very anxious to get things done,” he said. “It’s a tight schedule, but we don’t want to miss the academic year cycle.”

Staff reporter Bethany Firnhaber can be reached at bfirnhaber@labusinessjournal.com or (323) 549-5225, ext. 235. Staff reporter Omar Shamout contributed to this column.