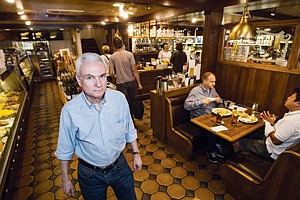 The way restaurateur Jeff Kavin sees it, Los Angeles Mayor Eric Garcetti’s plan to hike the minimum wage will have a maximum impact on his business – and it won’t be pretty.

Garcetti last week called for the minimum wage for all employees in the city to rise to $13.25 an hour over the next three years and to be indexed annually to inflation thereafter. The first hike, from the current $9 an hour to $10.25 an hour, would hit sometime next year, possibly by July 1.

Kavin, who owns Greenblatt’s Delicatessen in Hollywood, said the wage hike will force him to cut back his hours and scale back on his hiring.

“A $1 hike in the minimum wage I can take,” Kavin said. “But a 47 percent jump in three years? That’s just too much. There’s only so much more I can charge for a pastrami sandwich. Something else is going to have to give.”

Kavin is not alone. Restaurateurs, retailers, apparel makers and other businesses with heavy concentrations of minimum-wage workers would be hit hard by the huge series of hikes in the minimum wage. They already absorbed a statewide minimum wage hike to $9 from $8 this past July 1. The state minimum wage will rise again to $10 on Jan. 1, 2016.

Under the Garcetti plan, the minimum wage for an estimated 567,000 workers would rise to $10.25 an hour next year, $11.75 an hour in 2016 and $13.25 an hour in 2017 before being indexed annually starting in 2018. The exact dates the hikes would take effect will be hammered out as the proposal wends its way through the City Council late this year.

Garcetti’s plan – or something very much like it – is expected to easily pass the council. Seven of the 15 council members attended the Labor Day press conference where Garcetti formally announced the wage plan and are on board with the proposal. Only eight votes are needed for passage; several of the remaining council members have said they support the concept of raising the minimum wage and are waiting for a more detailed ordinance before deciding whether to commit.

Proponents of the wage increases argue they are necessary because the current minimum wage of $9 an hour (up to $18,700 a year) is not enough for a worker to support a family in Los Angeles. According to U.S. Census Bureau statistics, 27 percent of Angelenos – roughly 1 million people – live below the federal poverty line (defined as $23,650 a year for a family of four). Most of those people are working, either full time at one job or holding down multiple jobs.

“We all are now subsidizing these million people in poverty with our tax dollars,” said Garcetti spokesman Jeff Millman.

What’s more, proponents say, employees earning the $9 hourly minimum cannot afford to rent close to where they work without making tremendous sacrifices; buying a home, of course, is out of the question.

Some business leaders support Garcetti’s plan, including billionaire philanthropist Eli Broad and Rick Caruso, the billionaire shopping center magnate. Both have said the problem of poverty in Los Angeles has reached a critical level and that hiking the minimum wage is long overdue. They also argue that paying workers higher wages would pump more money into the local economy.

Others are generally supportive of the move to raise the minimum wage, but said the Garcetti plan moves too fast. They noted that with the combined statewide and Garcetti hikes, the minimum wage would jump more than 65 percent in four years.

“We do support the concept of fairness in wages and agree that it’s probably time to raise the minimum wage,” said Courtney Saavedra, director of marketing and public relations for Kitson, a high-end West Hollywood clothing retailer with four stores in Los Angeles. “But it absolutely would be better if we had an extra year or two to get to $13.25 an hour.”

Saavedra said that extra time would allow the company to adjust without having to make disruptive moves. She added that Kitson would probably be more selective in its hiring, especially at its L.A. stores.

In San Diego, the City Council last month overrode Mayor Kevin Faulconer’s veto of a bill to increase the minimum wage to $11.50 an hour by January 2017. The San Diego Regional Chamber of Commerce and the San Diego Small Business Coalition are mounting a petition campaign to put the hike before voters, with the expectation that they and Faulconer would campaign against it.

L.A.-area business groups are watching that referendum campaign closely. But even if that effort to overturn the minimum-wage hike succeeds, it would be more of an uphill battle in Los Angeles, with its higher proportion of Democrat-allied voters and a mayor who supports hiking the wage.

If stopping the wage proposal is unrealistic, pushing through changes could be more feasible for local business leaders. At the top of the list: obtaining a one-year extension to 2018 for the $13.25 wage.

“At the very least, we need to consider extending out the time and spreading the pain a little further down the road,” said Stuart Waldman, chief executive of the Valley Industry and Commerce Association.

Waldman said his group will also likely push for elimination of the annual indexing to the consumer price index that would kick in starting in 2018. He noted that inflation continued to increase even during the recent recession.

“Having an automatic raise during a recession just doesn’t make sense,” he said.

Both Waldman and Los Angeles Area Chamber of Commerce Chief Executive Gary Toebben said the city should enact offsetting proposals to save businesses money, such as eliminating the gross receipts business tax more rapidly. The City Council is considering a plan to eliminate the tax in gradual fashion over several years.

For Hollywood deli owner Kavin, it’s not just paying the higher wages to the dozen or so of his 35 employees who now earn at or just above the minimum. With a substantially bigger payroll, the restaurant would be kicked into a higher rate category for workers’ compensation premiums, costing him several thousand dollars more each year. Payroll taxes would also rise. And his vendors, facing their own cost pressures to deal with the wage hike, would charge him higher prices for the food ingredients he orders.

Toebben said preliminary estimates are that the workers’ compensation premium hikes and payroll tax increases would add more than $3,000 in annual costs for each minimum-wage worker in the city, on top of the nearly $9,000 in additional wages, bringing the total annual additional cost to a business for each worker to roughly $12,000.

“This is a hidden cost that often gets overlooked but is even more crushing for the small-business owner and non-profits,” Toebben said.

Garcetti’s plan would also indirectly hit businesses that don’t even have any employees in the city, if those businesses rely on local suppliers.

One such business is Karen Kane Inc., a women’s clothing manufacturer in Vernon. President Lonnie Kane said many of his company’s garment subcontractors are within L.A. city limits.

“I expect those sewing contractors will seek at least a 25 percent markup,” Kane said.

What’s more, an increased wage in Los Angeles could force him to raise his wages, even though he wouldn’t be subject to the L.A. rules.

“If we’re paying our workers $11 an hour and they can go a couple miles up the road and receive $13.25 an hour,” he said, “then we may have to pay more to keep the quality workers here.”