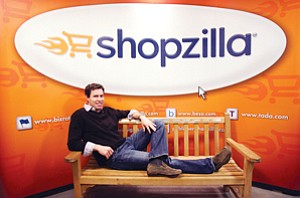 Fine Where He Is: Chief Executive Bill Glass at the West L.A. office of online shopping firm Shopzilla in a 2011 photo. Photo by Ringo Chiu.

In what could be a revival of an old fight, local Internet companies are pushing L.A. city officials to extend the low business tax rate the city carved out for them four years ago.

The business tax rate for Internet businesses of $1.01 for each $1,000 in gross receipts is due to expire at the end of this year; Internet company executives want the city to extend this rate for at least another four years. Otherwise, many of the companies could see their tax rate shoot up five-fold to $5.07, prompting new warnings that businesses might move out of the city.

“If the city increased the tax rate to go from $1 to $5 per $1,000 of gross receipts – essentially eating away all profit – we would move to any one of the neighboring areas that are more business-friendly,” said Blythe Holden, general counsel for West L.A.’s Shopzilla Inc., an Internet shopping firm headed by Chief Executive Bill Glass.

It was just such threats that five years ago prompted city officials to craft the tax category. At the time, the budget-strapped city had placed many Internet businesses in its highest business tax category ($5.07 per $1,000 in revenues), had reclassified others into that bracket and was threatening to reclassify even more. The Internet businesses objected, arguing the rate was excessive, especially for newer businesses that had yet to generate profits. Unlike an income tax, the gross receipts tax is taken “off the top” from revenues and is not based on profits.

LegalZoom.com Inc., an online legal documents company, decamped for Glendale, while Shopzilla was among dozens of other businesses threatening to leave until the taxes were lowered.

The special tax bracket was retroactive and crafted to last for five years (until the end of this year) and applied to “businesses providing online electronic applications or online search engines” as well as “data manipulation.”

The City Council’s budget and finance committee last week endorsed extending the low business tax rate for Internet companies for one year. It now goes to the full council.

Of course, this is taking place against a larger debate on whether to eliminate the business tax entirely, something that several local business groups have pushed for years. Los Angeles Mayor Eric Garcetti has repeatedly said he would like to see the tax eliminated, but in this year’s budget, he only proposed lowering the top tax rate slightly, to $4.25 by 2018. That would reduce the city’s tax revenue by up to $15 million a year; the hope is the lower tax rate would spur more businesses to form or move into the city to offset that loss. At this pace, eliminating the business tax would take years.

For now, though, Garcetti, who co-authored the Internet business tax break when he was on the council, is on board with extending that lower rate, though only through next year. In a letter to the budget and finance committee, he said, “It is critical that the city of Los Angeles keep out the welcome mat for these businesses.”

These were just two of the high-profile relocations into the city. Overall, according to a report last week from city Chief Administrative Officer Miguel Santana, 32 new Internet businesses received the lower tax rate of $1.01 per $1,000 in gross receipts since the tax break was enacted. Most of those businesses moved into the city as opposed to startups, which are already exempted from business taxes through an earlier ordinance. The report said 50 businesses already in the city were cleared to enter the new Internet business tax category and get their rates reduced.

Overall, the report said, the businesses in this Internet tax category have paid nearly $125,000 in taxes to the city. Had they paid at their old rates (chiefly the highest rate of $5.07 per $1,000 in gross receipts), they would have paid a total of $355,000 more to the city, assuming they reported the same revenue. It recommended continuing the lower tax rate for another year.

“I think it’s helped keep people here,” said Len Lanzi, executive director of the Los Angeles Venture Association, comprising venture fund executives as well as tech and other companies that receive funding. “There were some rumblings before they lowered the tax that people were talking about leaving town – and not just the couple big companies that made the headlines. These people ended up staying.”

One local Internet company executive said the lower tax rate should be made permanent – at least until if and when the business tax is eliminated entirely.

“The lower tax rate should definitely be extended – ideally without any expiration date, since the value of the change in encouraging new businesses and retaining existing businesses in the city has been proven at this point,” said Stacey Olliff, senior vice president of business development and legal affairs for El Segundo’s Prodege, which has several Internet businesses in its portfolio. Olliff previously worked for L.A. online ticket provider Fandango and helped push for the Internet business tax classification.

As for the cost to the city of the lower tax rate, the Venture Association’s Lanzi said that is a nonissue.

“What the report showed was that the cost to the city of the lower tax rate – $350,000 – is so trivial as to be almost a rounding error in the budget,” he said. “Why would they risk losing businesses from the city for such a trivial amount of money?”