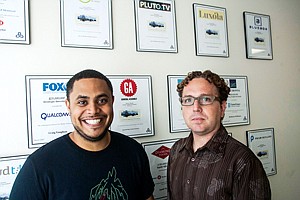 Nas has gone from break beats to spreadsheets.

The legendary rapper, full name Nasir Jones, counts Ben Horowitz of A-list Menlo Park venture capital firm Andreessen Horowitz as a close friend. And after getting his feet wet with some individual investments in tech startups alongside his buddy, Nas caught the VC bug.

This spring, he teamed up with some finance veterans and entrepreneurs to start his own shop, Century City’s QueensBridge Venture Partners, named after the New York City neighborhood where he grew up. And Nas is bringing more than his name – he’s also got an investment philosophy.

Skeptics might assume this is just another entertainer’s free-spending vanity project. And while Anthony Saleh, QueensBridge’s 28-year-old lead partner – and also Nas’ manager – knows that’s how some will see the firm, he’s quick to shoot the notion down.

Nas and Saleh made their first significant venture investment when they participated in a 2012 series A funding round for Genius, a New York outfit that keeps a database of annotated song lyrics. Andreessen Horowitz led the round. Nas and Saleh were in it for the profits, but they also just liked being part of the VC community.

“We wanted to be around young and smart people,” Nas, 41, said in an email to the Business Journal.

After making a few more individual investments in companies such as Palo Alto cosmetics company Walker & Co., which focuses on beauty products for African-Americans, Saleh and Nas decided to start QueensBridge.

QueensBridge operates more loosely than a traditional VC fund. The partners speak often, but they aren’t working in the same office on a day-to-day basis. Nas and Saleh are often on the road.

There is no designated managing partner, but Saleh is the firm’s de facto boss. QueensBridge has about $15 million in assets under management, with a substantial portion of that coming from Nas and Saleh. Saleh wouldn’t say if the firm has any outside investors.

The firm’s biggest deal to date was a $1 million investment in Prism Skylabs, a San Francisco software-as-a-service company that uses video cameras to gather information for businesses. In all three of these deals, and in most of QueensBridge’s portfolio companies, Andreessen Horowitz was also an investor, but QueensBridge has done deals without them, such as its recent investment in Boston digital health company Wellframe.

‘If it hits the fan’

For entrepreneurs, the chance to met Nas is a selling point for QueensBridge, but Corey said the rapper isn’t just a celebrity ambassador. He’s part of the investment team. He’s bullish on consumer technology and cryptocurrencies. And he has his own method of screening companies.

Nas begins by focusing on the personal traits of the founders, looking for examples of the single-minded dedication that led him to record critically acclaimed album “Illmatic” at age 20.

“I know what it means to be obsessed with a craft,” Nas said. “I like to find those qualities in companies and the people in them.”

To that end, he’s wary of serial entrepreneurs who always have their eyes on the next score. That’s a big red flag for him.

“I always want to know if they are passionate enough about what they are doing because if it hits the fan, they have to stick it out,” he said. “Looking ahead is great, but I want to make sure they are looking ahead with the company in mind.”

Saleh said when Nas decided to jump into VC investing, he made it a point to get to know more Silicon Valley big shots. And so far, in deals QueensBridge has invested in without Andreessen Horowitz, it’s participated alongside other high-profile firms such as Menlo Park’s DFJ.

As in any other line of business, he said, teaming up with proven operators gives celebrities the best chance of making money in venture capital, which is a risky business by nature.

“The most promising scenarios occur when talent partners with a top-tier VC firm and commits a small enough portion of their portfolio that failure does not put them at risk,” Munster said.