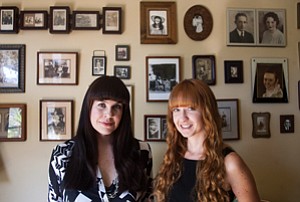 When Caitlin Doughty dies, she doesn’t want to be embalmed or buried in a casket or even cremated. If she has her druthers, her formaldehyde-free body will be exposed to the elements, accelerating her natural decomposition.

That’s odd, sure, but even more so when you consider Doughty is a professional mortician.

Of course, the firm she’s launching next month, Undertaking LA, isn’t a traditional funeral home. Rather, it’s a consulting service for clients who want a very particular – and today very niche – type of funeral. One that isn’t, as Doughty puts it, “hijacked and sanitized” by the funeral industry. She thinks of herself as something akin to a wedding planner but for funerals.

The mission driving Doughty’s work is the return of responsibility for the deceased from professional morticians to grieving families and communities.

Rather than having an undertaker embalm and prepare a body for a wake and burial or cremation, Doughty and business partner Amber Carvaly advocate for a more gradual and intimate process, one managed by family and loved ones and mostly free from professional intervention. Among other things, they want to help families see the body of a dead loved one up close, in its natural state, before a burial or cremation.

“When you spend time with a dead body, they do get increasingly deader as the days go on,” Doughty said. “My belief is that it is good for you as a living person to view the dead body and observe these changes. It will prepare you for them being absent.”

For the living, she said, it’s a more authentic experience of death.

But it’s a big departure not only from the traditional embalmed-body-and-casket funeral, a practice that’s becoming less common, but also from the more modern practice of a quick cremation and a “celebration of life.”

Doughty and Carvaly hope to create a kind of third way – funerals that aren’t needlessly sanitized or expensive, but that also give families a chance to say goodbye and accept the death of a loved one.

“As creatures, human beings always crave ritual,” Doughty said. “Part of my desire is to encourage people to develop rituals … (that) give the living the tender, slow, deeply intimate and cathartic experience of releasing their dead.”

Though Undertaking LA is a decidedly alternative business, Doughty and Carvaly have years of experience in the mainstream funeral industry. Both are graduates of Cypress College’s mortuary science program, and both are licensed morticians.

Doughty spent her formative professional years as a crematory operator, an experience she chronicled in her first book, “Smoke Gets in Your Eyes & Other Lessons From the Crematory.” The book, published in September, landed on the New York Times’ best-seller list shortly after its release.

Doughty and Carvaly not only inform and advise clients, but also possess the professional slab skills to work with the deceased. For instance, at a family’s request, they can close a corpse’s eyes and mouth, which often remain open after death. They also handle other details, including the paperwork for filing death certificates and obtaining burial permits.

Unlike most morticians, though, Doughty and Carvaly don’t have a mortuary of their own. They work at clients’ homes, helping them bathe the deceased’s body and prepare it for a viewing, either at the home or at a funeral parlor or other facility. They’ll also help families arrange for a body to be picked up from a hospital or morgue, and for a cremation after the body has been viewed.

Most important, they help talk families through the legalities of displaying and ultimately burying or otherwise disposing of an unembalmed body. It’s all perfectly legal, Doughty said, as the remains of the deceased belong to the next of kin and a corpse generally poses no immediate health or sanitation risk.

If it all sounds a bit macabre, that’s exactly what Doughty hopes to change.

“We are a deathphobic society because the traditional funeral industry has sold us a bill of goods,” she said. “We’ve been taught that a deceased person must immediately be scooped up and disposed of by the professionals, as if they are a ticking time bomb.”

Doughty and Carvaly also advocate for so-called natural burials – that is, burying the dead without a coffin. But that gets legally tricky.

While California law does not require that human remains be placed into a casket or other container, most cemeteries don’t allow casketless burials. And while it’s legal to display a body in your home, it’s illegal to bury one outside of a cemetery in California.

Undertaking LA’s services aren’t just different: They fly in the face of a shift in how Americans deal with death.

The days of the traditional funeral, complete with casket and embalming, are numbered. More than half – 53 percent – of Angelenos opt for cremation instead of a burial, said Bob Achermann, executive director of the California Funeral Directors Association in Sacramento.

“Boomers have been fighting their parents’ choices for five decades,” she said. “This rejection of parental values now is evident in end-of-life choices being made.”

There’s also the price: A traditional embalming and burial can cost thousands of dollars – a casket alone can be more than $1,000 – while a no-frills cremation can run just a few hundred. Armstrong Family Malloy-Mitten Mortuary, in the Pico-Union neighborhood near downtown Los Angeles, charges $620 for cremation, including transportation of the body. An urn costs just $9.

Despite those head winds, Doughty thinks she can stake out a market for the kind of natural, slow-moving funerals she’d prefer.

That’s one of the reasons she’s starting her company in Los Angeles.

“This city is a mover and shaker in cultural terms,” she said. “For instance, the trend toward cremation in the 1960s began here, so basing my work anywhere but Los Angeles would not allow me to effect the same degree of change.”