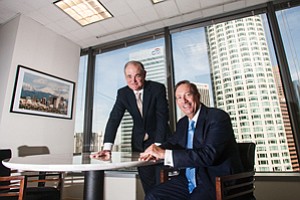 After more than 30 years as competitors, two well-known L.A. brokerage firms will merge next month.

Travers Realty Corp. of downtown Los Angeles will merge into the L.A. arm of Boston-based Cresa Partners, which has offices in Brentwood and Woodland Hills. The firms’ Newport Beach offices will also consolidate.

Gerald “Jerry” Porter, a Cresa founding principal, said no money will trade hands as part of the pending merger. Jim Travers, founder and chairman of Travers, will take an equity stake in Cresa Partners of Los Angeles Inc., as will his partners at Travers.

“Once we got past the fact that we’re competitors, we said, ‘Why don’t you join us? Then you have all the benefits of our platform. We’ll be bigger and we’ll just share our equity,’” Porter said. “We’re not writing a check for anything, we’re just merging.”

Travers said he’s fended off acquisition offers for years now, but finally decided to agree when he found a good match with Cresa. He said the two firms share values and he could benefit from Cresa’s decidedly larger platform. Both firms specialize in representing tenants exclusively in lease transactions, rather than also representing landlords, which can be seen as an unavoidable conflict of interest for full-service firms.

Cresa formed as an alliance of independent firms in 1993 and became one company in 1997. It now has more than 1,000 brokers nationwide and offers a wider range of services than Travers, including strategic planning, project management, facilities management and lease administration.

“The world has been consolidating, as many know, so this gives us a stronger, better base, but most important, it keeps me in the same mindset,” Travers said.

The merger of two tenant representation firms comes in the wake of Gov. Jerry Brown’s signature in August on a bill requiring commercial brokers to disclose in writing to potential clients whether or not they might also represent the other side in a transaction. The bill, SB 1171, is technically a revision of a law that has since the early ’80s required the same disclosures from residential real estate brokers.

“There was a perception, even amongst some in the brokerage community, that this was just wrong, and that there needed to be a clear disclosure to these tenants when the agent was also representing the landlord,” he said.

Jason Hughes, chief executive of San Diego tenant brokerage firm Hughes Marino, fought to get the bill passed. He said that he asked his state senator, Bill Hueso, to sponsor the bill, and subsequently spent “hundreds of thousands of dollars” to help it pass.

He commended Travers Realty and Cresa for their continuing commitment to tenants, which he said will be the way of the future for brokerage firms in California. But he cautioned that the newly merged firm could still face challenges. In particular, the firm’s “old school model,” which pits brokers against each other in an environment that encourages every broker to fend for himself, could stand in the way of the firm’s success.

Travers said he didn’t enter the merger agreement lightly; he spent a year seriously considering the idea, and he’s optimistic it will work out for the best.

“It’s been a very difficult, challenging time, because I didn’t want to make a wrong move and destroy the company; I wanted to make sure I was doing things the right way,” he said. “I know this was the best option for us.”