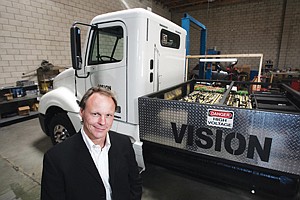 Officials at the ports of Los Angeles and Long Beach had for years looked to Vision’s zero-emission trucks as a potential solution to dirty air around the harbor. The company even got to show off its truck at a Sacramento event with then-Gov. Arnold Schwarzenegger in 2009.

But Vision has not been able to sell its trucks to commercial users. With a price tag approaching $300,000, each of the company’s zero-emission trucks can be about twice as expensive as their diesel counterparts. And it turns out hydrogen fuel isn’t easy to come by.

The company, which also did business as Vision Motor Corp., filed for Chapter 11 bankruptcy protection late last month. It reported $1.3 million in assets and nearly $3.2 million in debt.

The company had recently tried to get shareholders to approve billions – yes, billions – of new shares to help raise new capital, but that plan failed when there wasn’t a quorum at a shareholder meeting in late August, according to a statement from Martin Schuermann, the company’s chief executive.

“We are disappointed by the lack of participation by our shareholders,” he said. “This more than limited our options to raise capital; it effectively made it impossible.”

Vision said it would continue government-supported projects and other work during the bankruptcy process.

Schuermann did not return phone calls.

Vision’s financial problems came despite support from local and federal officials. The ports of Los Angeles and Long Beach in 2010 supported a demonstration project that would test one of Vision’s Tyrano hydrogen trucks at the ports.

The ports combined to give the company at least $1.7 million in grants, according to Vision’s filings with the Securities and Exchange Commission.

Vision also reported having won a total of $4.4 million in Energy Department grants to test hydrogen-powered trucks at the ports of Los Angeles and Houston.

But Vision hasn’t always been able to deliver for the agencies that have supported it.

The Port of Los Angeles asked Vision in 2011 to retrofit another company’s electric trucks by adding hydrogen fuel cells, but Vision could not make its power system work with the other rigs in time to meet a funding deadline.

Also, the South Coast Air Quality Management District awarded a $958,000 contract to Vision for a quartet of Tyrano trucks that would go to work around the harbor.

Vision, however, has yet to achieve any milestones that would require the AQMD to make any payments.

“As we understand, they are hoping to come out of chapter 11 with restructuring that allows them to continue the work on this contract,” agency spokesman Sam Atwood said in an email.

The bankruptcy also comes despite apparent interest from trucking companies in its rigs.

Two years ago, Total Transportation Services Inc. of Rancho Dominguez signed a letter of intent with Vision to buy as many as 100 trucks for a total of $27 million. Total Transportation tested a pair of Tyrano trucks, but never reached the point where buying them made sense.

Victor La Rosa, the trucking company’s chief executive, said it’s difficult to get the hydrogen fuel that powers the trucks.

“The technology is great. The concept is great. It’s going to be the supply of fuel,” he said. “Until that is tackled by someone, we’re going to have obstacles.”

California has only nine publicly accessible hydrogen fueling stations, according to the California Fuel Cell Partnership. The only one near the local ports is at a Chevron station near the intersection of Pacific Coast Highway and Western Avenue in Harbor City.

Vision reported a standard Tyrano had a range of 200 miles on a full tank of hydrogen. The trucks have battery-powered electric motors and use a hydrogen fuel cell to charge batteries while in use.

Despite Vision’s troubles, other companies could make good on the promise of bringing zero-emission trucks to the local ports, said John Boesel, chief executive of Calstart, a Pasadena organization that supports clean vehicle technology.

“I think there are a number of exciting companies developing zero-emission truck technologies,” Boesel said. “Vision Industries had shown some promise, but they are certainly not the only players in this space.

Other companies that might be able to step in include Motiv Power Systems of Foster City; TransPower of Poway; or BYD Motors Inc., a Chinese company that keeps its North American headquarters in Los Angeles, Boesel said.

Motiv produces an electric trash hauler and TransPower makes electric trucks. BYD, which has an electric bus factory in Lancaster, could conceivably branch out to heavy trucks, he said.