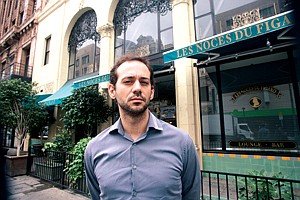 Part of a family of restaurateurs, he left France in 2009 with $2 million and a desire to bring fine French cooking to downtown Los Angeles. Three years later, he opened Les Noces du Figaro, which became a modest hit, getting raves from foodies for its cuisine and ambience.

For Mgaieth, who wanted to introduce his favorite flavors to a new market, the experience has instead been an introduction to local regulations and, now, the court system.

What’s more, since he’s here on an employment-based visa, he might be forced to return to Paris if his restaurant remains closed.

“I quit everything over there to come here,” Mgaieth said. “I’d have to go to France with my pockets empty.”

The plot of Mgaieth’s possible riches-to-rags story was set in motion 36 years ago, when lead paint was banned. Even low levels of lead can cause developmental problems in children and pose risks to pregnant women, and while it was phased out in the late 1970s, lead-based paint is still present in thousands of properties in Southern California built or renovated before the ban.

Grant Riley, a Century City litigator specializing in real estate litigation and who is not involved in the dispute over Les Noces, said landlords should disclose hazards such as lead paint when leasing space but often don’t.

Mgaieth (pronounced Mah-gate) said Thomson Foundation Properties, which owns the historic, 86-year-old building at 618 S. Broadway that housed Les Noces, did not tell him about the lead and other hazards when he signed his lease in 2011.

Michael Mehdizadeh, the real estate agent who brokered the lease between Mgaieth and Thomson, said no one knew about the lead-based paint at the time the deal was made. He declined to comment further because the dispute is set for litigation.

Mgaieth had worked in finance in Paris before he moved to Los Feliz in 2009, joining his father and sister, who had moved to Los Angeles two years earlier.

The chief reason for the move: Taxes in France are high. They’re so high, he said, it made more sense for his family to close their eatery in Paris, where it had been successful for 30 years, and reopen in Los Angeles.

His father and sister found success with their venture, Figaro Bistrot in Los Feliz, which encouraged Mgaieth to take a stab himself.

He signed the lease for 8,600 square feet, about half of the space at the Broadway building, in 2011 and said he spent $2 million to fix the space up before debuting Les Noces du Figaro in December 2012.

The building sits in the heart of the Historic Broadway Theater District, an area that has been the focus of City Councilman Jose Huizar’s Bringing Back Broadway plan, aimed at transforming the area into a bustling retail and entertainment district.

“We wanted to invest in downtown because downtown is coming back,” Mgaieth said.

At first, it seemed the investment would soon pay off.

Foodies were raving about the bistro’s service, ambiance and food on sites such as Yelp with four- and five-star reviews up until the day the restaurant closed in September.

But trouble was brewing beneath the dining floor. After a rain earlier this year, Mgaieth discovered mold growing in the basement, which was used only for storage. He hired an inspector to check it out, and in August received the grim report: There was not only mold, but also asbestos and lead-based paint.

“To continue operating as a full restaurant and bar under these circumstances would be unethical, immoral, unsanitary and possibly illegal,” the report said.

Dismayed, Mgaieth said he asked the property owners to remediate the problem but, he claims, they refused, saying it’s not their responsibility.

The dispute has since escalated. Mgaieth filed a complaint in Los Angeles Superior Court against Thomson earlier this month. The eatery accused its landlord of breaching the lease agreement, which holds Thomson liable for the building’s foundation, exterior walls and roof, according to the complaint.

Mgaieth also alleges his landlord failed to disclose that lead-based paint was in his building.

A response from the property owners has not yet been filed in court.

Derrick Moore, a principal at downtown L.A. real estate services company Avison Young who specializes in urban retail properties, said property owners ought to disclose to tenants when there are hazardous substances, such as lead-based paint, but that doesn’t always happen.

“There really isn’t a rule in place,” Moore said. “What happens more often than not, the tenant or maybe their representative – a broker or attorney – will ask the question. But you may have some inexperienced tenant that will make a deal without even asking.”

Mgaieth didn’t ask the question, and has had to lay off 20 of his 29 employees. The rest, he said, are working at his family’s Los Feliz restaurant.

While he remains hopeful Les Noces du Figaro will reopen, he laments not being at work every day.