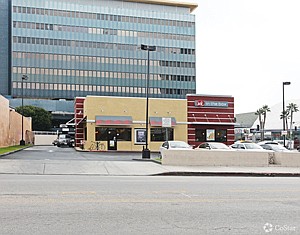 In Hollywood, where developers are pouring billions into sky-high projects, what few plots of developable land remain have become a smoking-hot commodity.

Case in point: A small property on Sunset Boulevard, currently home to a Jack-in-the-Box restaurant, is under contract for a super-sized price.

R.D. Olson Development has agreed to pay nearly $13.8 million, more than $581 a square foot, for the half-acre property at the northeast corner of Sunset and Cahuenga boulevards, according to real estate sources with knowledge of the deal. The buyer has paid a nonrefundable deposit for the site and is working through the due-diligence process. The sale is expected to close early next month.

Only one land deal in Hollywood has exceeded that per-foot price. New York’s KLM Construction last year paid about $714 a square foot for a long-term ground lease under the TCL Chinese Theatre. But the two land sales are not exactly comparable: One deal was for land beneath a thriving 35,000-square-foot movie theater considered an American icon, the other to a 3,900-square-foot run-of-the-mill fast-food joint.

John Tronson, a principal at Avison Young, represented the sellers of the Jack-in-the-Box property, Baird-Hogan Family Trust. He said he was taken aback when the property attracted six aggressive bidders and was under contract in three weeks.

“It was surprising not only that the value got as high as it did, but how many people were willing to pay it,” he said. “It was a lightning-fast process.”

Susan Baird, a representative of the family trust that sold the property, did not return requests for comment on the sale, but a recording for her voicemail suggests she had experienced a barrage of interest in the property.

“Please leave me a message and I’ll get back to you as soon as possible,” the message said, “unless you are a Los Angeles real estate agent, in which case I would like you to stop calling this number.”

Officials of R.D. Olson declined to comment on the pending transaction.

The small Sunset development site had been in the Baird-Hogan family for more than four decades. Before Jack-in-the-Box built a restaurant there in 1987, it had been a Chevron gas station.

The property, at 6407 W. Sunset, sits less than three blocks from the Hollywood-Vine Metro station, well within a district designated by the city for high-density development. Furthermore, it is across the street from record store Amoeba Music and Arclight Cinema’s Cinerama Dome, popular destinations for local residents and tourists alike.

The site will be a first for R.D. Olson, which, despite its extensive experience in Southern California, has never built in Hollywood. On its website, the company says it specializes in high-density urban projects.

It has developed student housing in Riverside, a corporate office park in San Clemente and a medical office building in Los Angeles near Los Angeles County-USC Medical Center. It also has developed at least 10 Marriott hotels and is building two more, in Burbank and Pasadena.

Michael Albert, a broker with KW Commercial, sold R.D. Olson the Burbank development site and recently sold a 1.8-acre development site in Hollywood for significantly less – about $357 a square foot – to a different buyer. In that case, the buyer plans to build apartments, and Albert said multifamily wouldn’t make financial sense on the Jack-in-the-Box site, given its high sale price.

“That’s an aggressive price per foot,” he said. “You can’t really make that pencil as an apartment project, but knowing who they are, they probably want to do a hotel project.”

If that were the case, the R.D. Olson project would join at least nine other hotels – with an aggregate 1,200 guest rooms – that are in some stage of planning or construction in Hollywood.

Joe Mariani, director of strategic initiatives and business development for the Hollywood Property Owners Alliance, said that even with so many other hotels in the works, another would be a welcome addition.

“With occupancy for Hollywood hotels exceeding the countywide average by nearly 5 percent, there truly is a pent-up demand for hotel rooms in our neighborhood,” he said. “This would be the first hotel on Sunset Boulevard located in the Sunset and Vine Business Improvement District. We’re seeing considerable growth in the commercial workforce sector there, meaning the new hotel will likely be an anchor for corporate travelers.

“Usually hotel dirt can go for a little more than multifamily dirt. In order to pay that, my guess is they’ll have to build a couple hundred hotel rooms.”

If a hotel is indeed in the works, it will be years before anything comes out of the ground at the site. Jack-in-the-Box exercised an option to extend its lease for a final five-year term before the property went under contract. As a result, it will operate there through late 2019, according to a source. So the soonest shovels could realistically be in the ground is early 2020.

Tronson said the lease extension might not delay development plans, given the vagaries of developing in Hollywood, which has a notoriously long and litigious approval process.

“I doubt they’d get in the ground before five years anyway,” he said. “Ninety percent of developers come rolling in thinking they’ll be in the ground in 18 months, but they’re obviously not used to doing work in Hollywood.”