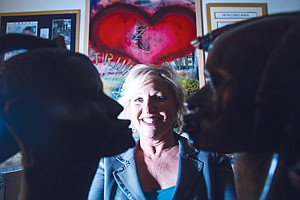 In the Mood: Matchmaker Julie Ferman with romance-minded decorations at her house in Thousand Oaks. Photo by Ringo Chiu.

Starting a relationship takes effort – from setting up the first date to learning about your potential mate’s life goals to discovering their quirky interests.

But now you can do more, much more, to find the ultimate mate. You can factor in their serotonin levels and the strength of their immune system, among other biological aspects.

And high-end matchmaker Julie Ferman of Westlake Village will help you find your genetically compatible partner.

She’s one of three U.S. matchmakers – and the only one in Los Angeles – to link up with Canadian biotech startup Instant Chemistry for an exclusive partnership to offer her VIP clients the chance to find a date with the help of DNA testing.

Ferman has been in the business for more than 20 years and said her matches have led to more than 1,000 marriages, but she’s hoping the DNA tests will lead to more – and perhaps more credibility with clients, most of whom are educated professionals who pay upwards of $5,000 for her services.

“I think I’ve done matchmaking every way there is to do matchmaking and this is a brand new twist,” she said. “I see the resistance people have to me, the matchmaker, making a suggestion, but I’m just another flawed human. If it’s God or nature, maybe they’ll pay more attention.”

The new offering could give Ferman more leverage in the increasingly competitive matchmaking market, which has been saturated in recent years by data-driven online dating services such as Santa Monica’s eHarmony and mobile dating apps such as West L.A.’s BeLinked and Culver City’s Whim.

Patti Stanger, star of Bravo reality TV series “The Millionaire Matchmaker” and owner of the Marina del Rey-based Millionaire’s Club matchmaking service, said adding science into the world of matchmaking is always a plus. For instance, Stanger herself recently created a course that uses music infused with subliminal messages to help clients be more positive and open to romance.

But in the case of DNA testing, she said she’s skeptical about its usefulness.

“Chemistry, as much as it’s 60 percent of the deal, is not everything,” Stanger said. “You have to find out, Do people have morals and values? Finances are the No. 1 reason why people get divorced. So, you can have chemistry with a bartender, but what’s that going to do for you?”

Ferman has been a matchmaker since 1990 and met her husband, Gil, through a matchmaking service. Before signing a client, she meets with them for a coaching session and asks what kind of relationship they’re looking for and the top qualities they want in a partner.

She turns some potential clients away.

“If I don’t think their expectations are in line with reality – or let’s just say the reality of what I can provide – I will not take this person on,” she said.

Ferman has about 75 clients a year. They pay $5,000 or more to work with her for between three and six months, with the price and duration depending on how picky they are about a mate and how easily Ferman thinks they can be matched up.

She signs up clients for online dating services and events – so they don’t have to themselves – and interviews potential dates before introducing them to her clients. Her clients, most of them well-educated professionals older than 45 or younger than 35, don’t have time to meet with duds and don’t want to comb through dozens or hundreds of potential dates on matchmaking websites.

On top of those services, Ferman is adding the DNA testing service, promising it can lead to a more targeted match. She partnered with Instant Chemistry, which launched last year. Only two other U.S. matchmaking services, in New York and Santa Barbara, and four in Canada partner with the company.

Clients who choose to participate are registered on dating website SingldOut.com, another Instant Chemistry partner, which matches people based on the company’s DNA tests. The test and three months of access to SingldOut’s database costs $200, though Ferman covers those costs for her clients. The DNA tests are relatively inexpensive because, unlike the more thorough tests used by criminal investigators and medical researchers, these look at only a handful of genetic markers.

After signing up, clients receive an Instant Chemistry DNA kit in the mail. The kit requires the member to spit into a test tube, which is then mailed to a lab in Toronto. After about a week, the results are posted to the member’s online dating profile. Members must also take a personality test.

The DNA kits look at six genes in the immune system. Dr. Ron Gonzalez, founder and chief executive of Instant Chemistry, said his company looks at those elements based on existing scientific research about their effect on relationships.

One of them, for instance, is serotonin, a chemical that regulates mood, appetite and sleep. Studies have found two versions of the gene that transports serotonin. People with one type, a shorter version, tend to be more emotional, while those with a longer version are less so.

Gonzalez said two studies from UC Berkeley found couples that share the short gene saw marriage satisfaction decline over time. So, by incorporating this information, Instant Chemistry can help clients with short serotonin genes match up with those with long genes, who might prove to be better partners over time.

“If you can incorporate that into weeding out a pool of 1,000 potential matches, that could be a pretty powerful thing when you add the cultural and socioeconomic factors,” Gonzalez said.

After one of her clients has finished the DNA and personality tests, Ferman takes over, managing their online profile and searching for potential dates.

“The cool thing is if they go through me then I can include them not only in the SingldOut process but in my process as well,” she said.

She has her own database of former clients and those who register on her website for free. (Ferman said she often approaches strangers who appear to fit her clients’ preferences and asks them to register on her site.)

But by linking up with SingldOut and Instant Chemistry, Ferman gets to match her clients with a broader pool of potential partners. That’s part of the appeal for Ferman, but she’s more interested in the added clout she thinks she’ll have with clients when she has genetic information pointing toward a good match.

“It gives me more ammo,” Ferman said. “We can really look and say, ‘It looks like Jack and Jill ought to meet,’ or, ‘Jack and Jill seem really hot for each other visually, but I’m seeing some challenges here and I’m not really sure we want to make this match.’”