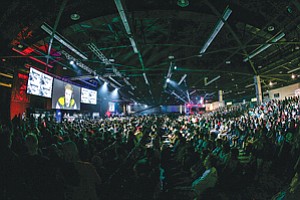 Shooting Stars: The Major League Gaming Championship in Anaheim features Call of Duty and other games. Photo by Courtesy Photo

With about two minutes left to go in the June championship game, a crowd of thousands in Anaheim broke into chants of “Let’s go, Optic!” as their team rallied from a huge halftime deficit to defeat its bitter rival.

The action took place not at a professional baseball or hockey game, but during “Call of Duty” Championships, in which teams played Activision Blizzard Inc.’s first-person shooter game for tens thousands of dollars in cash prizes.

The exploding popularity of live video-game contests, such as the one held at the Anaheim Convention Center, has led the producer of the event, New York’s Major League Gaming, to partner with NCompass International of West Hollywood to create more such live extravaganzas.

In the hope of reeling in more viewers – and more ad dollars – NCompass, an experiential marketing firm specializing in events, and Major League Gaming plan to bring corporate sponsorships and high-end production values to the world of online video-game competitions. To do that, they are taking cues from business and broadcast models employed by traditional sports such as football, basketball and baseball.

“There’s a great opportunity to bring these brands in and let them see the power of the e-sports world and get their message out,” said Ryan Fitzpatrick, vice president of lifestyle marketing and branded entertainment at NCompass. “We have the opportunity to excel with Major League Gaming as we start to really drive and craft these events to be more broadcast friendly and bring in more of a mainstream viewership.”

Online viewers watched 2.4 billion hours of video-game competitions, also known as e-sports, last year, according to a report from Englewood, Colo., analytics firm IHS Inc. That’s nearly twice as much viewing as in the year before. In four years, IHS projects that will reach 6.6 billion hours, boosting the e-sports video market to $300 million.

“E-sports is probably going to be more culturally relevant to the next generation of kids than any other sport,” said Jason Xu, founder and chief executive of Vancouver’s Battlefy, which provides a competition management platform used by e-sports leagues around the world. “I definitely don’t see the numbers going down.”

NCompass is no stranger to video games. Fitzpatrick, the former global head of video-game marketing at Red Bull North America, was brought on in 2007 to spearhead the firm’s work with game publishers like Activision.

Other major clients include Microsoft Corp.’s Xbox division and Best Buy Co., both of which regularly work with NCompass to produce large-scale video-game competitions around the country. Fitzpatrick said the firm produces about six to eight such competitive events each year.

The 11-year-old marketing firm specializes in creating large-scale events and experiences centered on brands. Automotive trade shows are another major revenue stream for the company, and it also helped integrate Blackberry brand experiences into U2’s most recent world tour.

Rather than fall back on a traditional agency-client relationship, NCompass’s deal with Major League Gaming will allow it to have an equity stake in the events they create. The pair also will look to increase ad rates and revenue as well as explore naming-rights opportunities that accompany the events and venues the pair are building.

Details of the arrangement are being ironed out and both companies declined to disclose specifics.

“The spirit of this partnership is to build things together,” said Mike Sepso, Major League Gaming’s co-founder and president. “We’re asking, ‘How do we combine forces to create new things that we can co-own going forward?’”

Major League Gaming had planned to stage 24 events next year. The partnership with NCompass will add five or six to that lineup.

Many of the events the team produces are expected to be staged at the new 14,000 square-foot MLG.tv arena in Columbus, Ohio, which is set to open next week.

While 14,000 square-feet might sound large for a venue built for watching other people play video games, consider that Major League Gaming’s event at the Anaheim Convention Center had 18,000 attendees and the World Championships for “League of Legends,” a wildly popular game from Culver City’s Riot Games Inc., sold out the Staples Center, set up to seat about 12,000, in summer of last year.

In addition, NCompass and MLG are turning to China, where they will build a 15,000-seat arena on an island near Macau. The 100,000-square-foot site is expected to open in 2017 as the crown jewel of a $2.8 billion gaming-themed entertainment complex.

E-sports has been hugely profitable in countries like South Korea and Taiwan for more than a decade. However, mainland China’s more than 600 million Internet users, many of whom play online games, are still largely up for grabs when it comes to e-sports viewership.

“The Chinese market is actually new,” said Battlefy’s Xu. “It is yet to be conquered.”

The move into live events is an extension of Major League Gaming’s core business: operating MLG.tv, an Internet video site where fans can watch top gamers from around the world compete and talk about their favorite games.

Unlike competitor Twitch, which has 54 million users and was recently purchased by Amazon.com Inc. for nearly $1 billion, Major League Gaming is focused on a smaller number of about 150 premium channels featuring the most recognizable names in e-sports.

Top stars – you might recognize them as “Nadeshot” and “Scumpi” – can earn six figures a year, mostly from ad revenue earned via their online video channels on MLG.tv and YouTube, where Major League Gaming also operates a channel.

In September, about 25 million people visited Major League Gaming’s network across all its digital and social media channels, though the company didn’t disclose how many of those visitors actually watched videos. Most videos on its YouTube channel have fewer than 100,000 views, but some stretch to more than 250,000 and even 1 million hits.

The company also has 9 million registered users for its online tournament system, in which users compete against each other in more than 40 different games. While it’s free to sign up and play, premium paid content is available for $5 a month and up.

“The brands are starting to realize that the demographics of e-sports viewers are better in terms of 18- to 24-year-olds than even traditional sports,” said Xu.

“That’s the sweet spot,” added Ira Kalb, an associate professor of clinical marketing at USC’s Marshall School of Business. “You not only get people young, but they’re old enough to have money.”