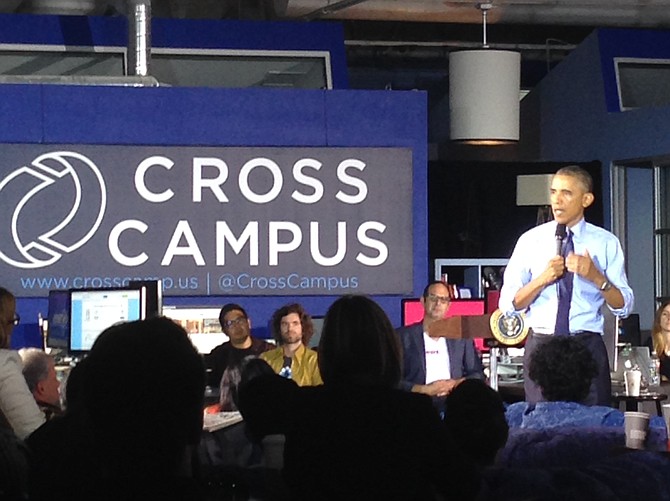 President Barack Obama might be facing a tough final two years in office as his sagging ratings could position Republicans to take control of the Senate.

But as his time in the White House enters its closing chapter, Obama already has a job offer waiting for him: to work for Ariel Jalali at his Santa Monica startup Sensay, a help app which aims to monetize people’s advice.

“The idea of still being able to dabble a little bit in the issues of the day while being in sweatpants and a baseball cap sounds pretty attractive,” he said. “But I think I’d have to check out your perks.”

Obama on Thursday fielded questions from roughly 150 L.A. entrepreneurs at an intimate town hall hosted by Santa Monica co-working space Cross Campus. Topics ranged from how to increase the number of women in technology to his administration’s recent push to establish manufacturing innovation hubs across the country. He also stood by net neutrality, saying he was “unequivocally committed” to keeping people’s access to Internet data open.

He called upon traditional industries to find ways to innovate their products and services while making them more efficient and cutting back costs. But Obama didn’t disappoint the room full of eager millennials, many of whom are hoping to come up with the next big disrupting force.

“Entrepreneurship is in the DNA of this generation,” he said.